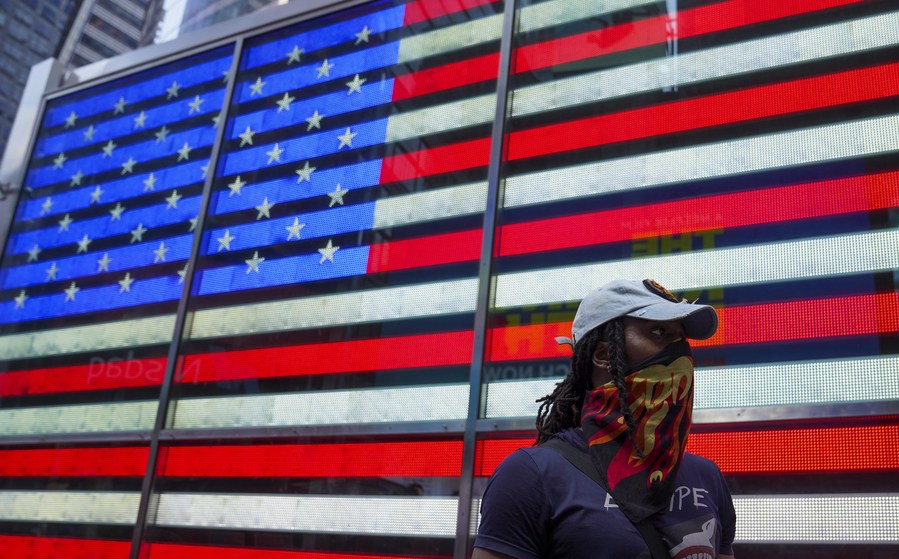 A pedestrian walks in Times Square in New York, the United States, on Aug. 9, 2020. (Xinhua/Wang Ying)

- The disease has killed more Americans than the Korean War, Vietnam War, War in Afghanistan and Iraq War combined.

- Some U.S. politicians' disregard for human life, the deep-rooted racial inequity as well as the ever-widening wealth gap have exacerbated the dire situation.

There are few signs that the spread is slowing down in the United States.

Even though it enjoys the greatest economic strength and one of the most advanced medical systems in the world, the United States became the hardest-hit country soon after the global outbreak of the pandemic.

Early warnings from other parts of the world did not prompt the country to take timely measures and make coordinated efforts to fight the virus. 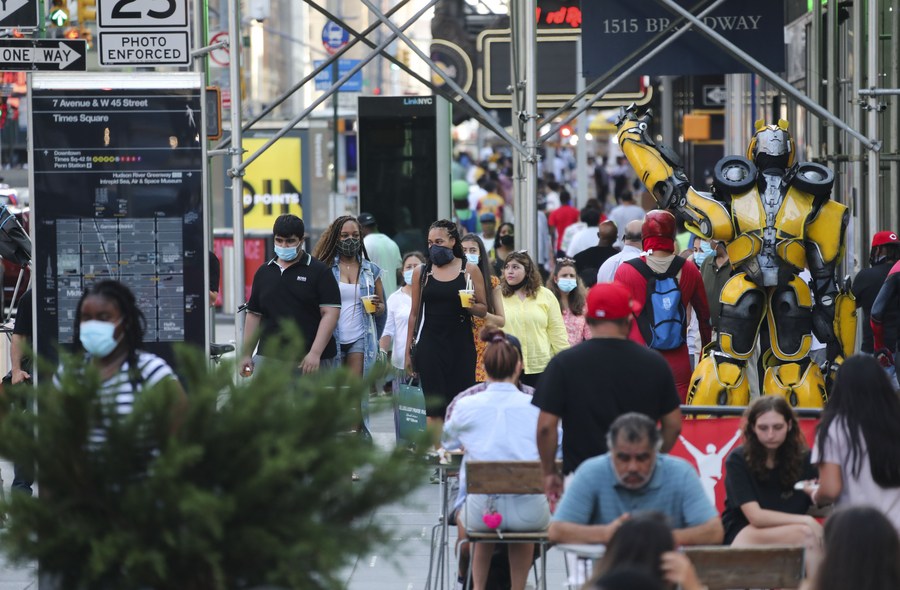 COVID-19 has now become the leading cause of death in the United States, killing more people per day than cancer or heart disease, according to a graph published in Newsweek on April 9. The disease has killed more Americans than the Korean War, Vietnam War, War in Afghanistan and Iraq War combined.

Some U.S. politicians' disregard for human life, the deep-rooted racial inequity as well as the ever-widening wealth gap have exacerbated the dire situation.

In order to downplay the scope and danger of the pandemic, U.S. President Donald Trump has repeatedly claimed that the United States has one of the lowest COVID-19 mortality rates in the world.

However, the reality is that the United States has a mortality rate per 100,000 higher than many other countries, including Canada, Germany, France and the Netherlands, according to a recent article published by The Hill.

"But Trump is not focused on those numbers" and he has been fixated on a figure called the case fatality rate (the percentage of people who die after contracting COVID-19) in order to confuse people and cover up the extremely high rate of deaths as a proportion of the population, according to the article.

What's more, the country's vulnerable groups, including the elderly, the poor, African Americans and Latino Americans, have borne the brunt of COVID-19 and remain most at risk.

In at least 23 U.S. states, a majority of deaths were linked to nursing homes, according to The New York Times. As of July 15, deaths in long-term care facilities accounted for more than 42 percent of the country's pandemic fatalities.

Ben Shapiro, editor-in-chief for The Daily Wire, an American right-wing news website, suggested in an interview on April 30 that old people's lives are not worth saving.

"If somebody who is 81 dies of COVID-19, that is not the same thing as somebody who is 30 dying of COVID-19 ... If grandma dies in a nursing home at age 81, that's tragic and it's terrible, also the life expectancy in the United States is 80," he said.

Minority populations have also been disproportionately hardest hit by the coronavirus in the country.

However, despite the call of public health experts to prioritize minority communities in tackling the virus, the Trump administration has not taken enough actions.

The pandemic in the United States has provided not a platform for cooperation among politicians, but a battleground for them to grapple with each other. 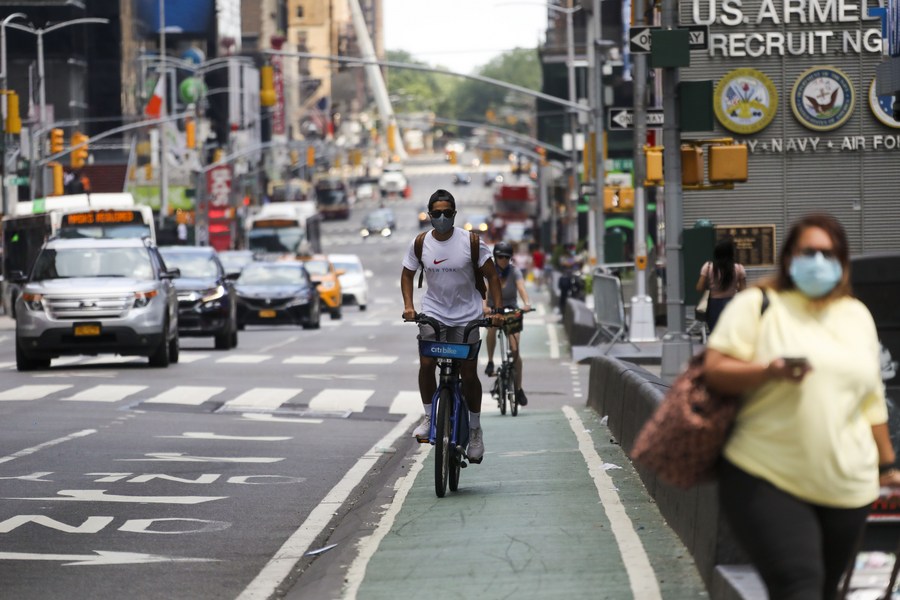 As the COVID-19 cases surge across the United States, Republicans and Democrats increasingly view the disease in starkly different ways, according to a report published on June 25 by the Pew Research Center.

The wide split between different political factions has not only prevented U.S. citizens from acting in accordance with the preventive guidelines, but also hindered the whole country from forming a comprehensive anti-pandemic plan.

Instead of following scientists' and public health experts' advice and listening to the voice of the masses, some U.S. politicians chose to prioritize their own political interests.

Few Americans want to see their local schools reopen for in-person instruction as usual or even with minor adjustments considering the severe COVID-19 situation, said a new poll released on July 22.

Only 8 percent of Americans say their local K-12 schools should open for in-person instruction as usual and 14 percent think schools can reopen with minor adjustments, showed the survey conducted by The Associated Press-NORC Center for Public Affairs Research.

However, Trump and his administration are pressuring schools to reopen in the fall, threatening to withhold federal funding from schools that do not comply, because reopening schools is seen as a crucial step to restarting the country's economy for his reelection campaign.

Witnessing the government's inability and bigotry in tackling the coronavirus crisis, more than 1,200 U.S. scientists have signed an open letter, accusing the Trump administration of denigrating "scientific expertise."

They also warned that "the dismissal of scientific evidence in policy formulation has affected wide areas of the social, biological, environmental and physical sciences."

"In a perfect world, this unprecedented pandemic would have been an occasion for Americans to put aside their differences and rally around the flag ... But overall, the pandemic has served to deepen polarization, and that is likely to get worse as time goes on," Francis Fukuyama, a famed political scientist, wrote in a recent article titled "The Wages of American Political Decay."

Since the onset of the pandemic, the Trump administration has been addicted to a blame game, heaping baseless accusations against China and the World Health Organization (WHO) to divert Americans' attention away from the virus. 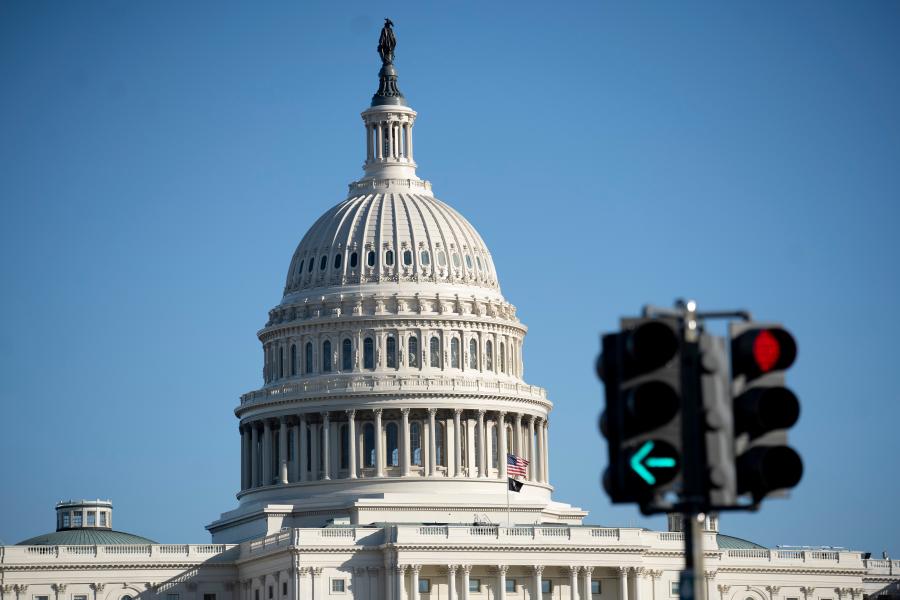 Labeling the virus as the "China virus," the Trump administration claimed it was lab-made in Wuhan and blamed China for hiding the truth, despite the fact that China immediately briefed the WHO, the United States and other countries after it identified the COVID-19 outbreak.

On Jan. 12, China released the whole genome sequence of the coronavirus, which has proved critical for diagnosis and treatment of the disease globally.

The conspiracy theory claiming that the novel coronavirus was made in the Wuhan Institute of Virology in China has also been rejected by top scientists around the world.

Tom Inglesby, director of the Center for Health Security at Johns Hopkins University, said that "my judgement continues to be that (COVID-19) is consistent with a naturally occurring source," according to The Washington Post.

Ian Lipkin, director of the Center for Infection and Immunity at Columbia University, also told The Washington Post there is no evidence to support "the idea that this (the virus) is released deliberately or inadvertently."

Studies on the origin of the virus have overwhelmingly shown that the novel coronavirus originated naturally rather than from any institution.

The WHO, which was created to improve health globally, has also been targeted by the Trump administration.

To the astonishment of many American experts, the administration has begun to withdraw from the WHO last month, accusing it of being too close to China and having mishandled the coronavirus pandemic.

The U.S. move deals a blow to the fragile global cooperation on pandemic control.

France and Germany decided to quit talks on reforming the WHO because ironically, the United States, despite its decision to leave the organization, still attempts to lead the negotiations, the Reuters reported on Friday.

"Nobody wants to be dragged into a reform process and getting an outline for it from a country which itself just left the WHO," a senior European official was quoted by the report as saying.

Tedros Adhanom Ghebreyesus, chief of the WHO, said on Thursday that the COVID-19 pandemic can not be defeated in a divided world, and he hopes the United States will "reconsider its position" on the decision to withdraw from the organization.

"Now it's time to work together, it's time to focus on fighting the virus. So I hope the U.S. will reconsider its position," the WHO director-general said at the Aspen Security Forum via video link.