- All of the 19 districts and counties in Three Gorges Project regions shook off poverty in May thanks to a series of supportive policies and local government efforts.

- The regions had been plagued by poverty long before the project was launched.

- Boasting a number of tourist attractions with beautiful natural landscapes, the regions have taken tourism as one of their pillar industries.

Covering about 10,000 square km, the regions involved in the project are located in the upper reaches of the Yangtze River, China's longest waterway. With a population of about 30 million, they had been plagued by poverty long before the project was launched.

All of the 19 local districts and counties shook off poverty in May thanks to a series of supportive policies and local government efforts. 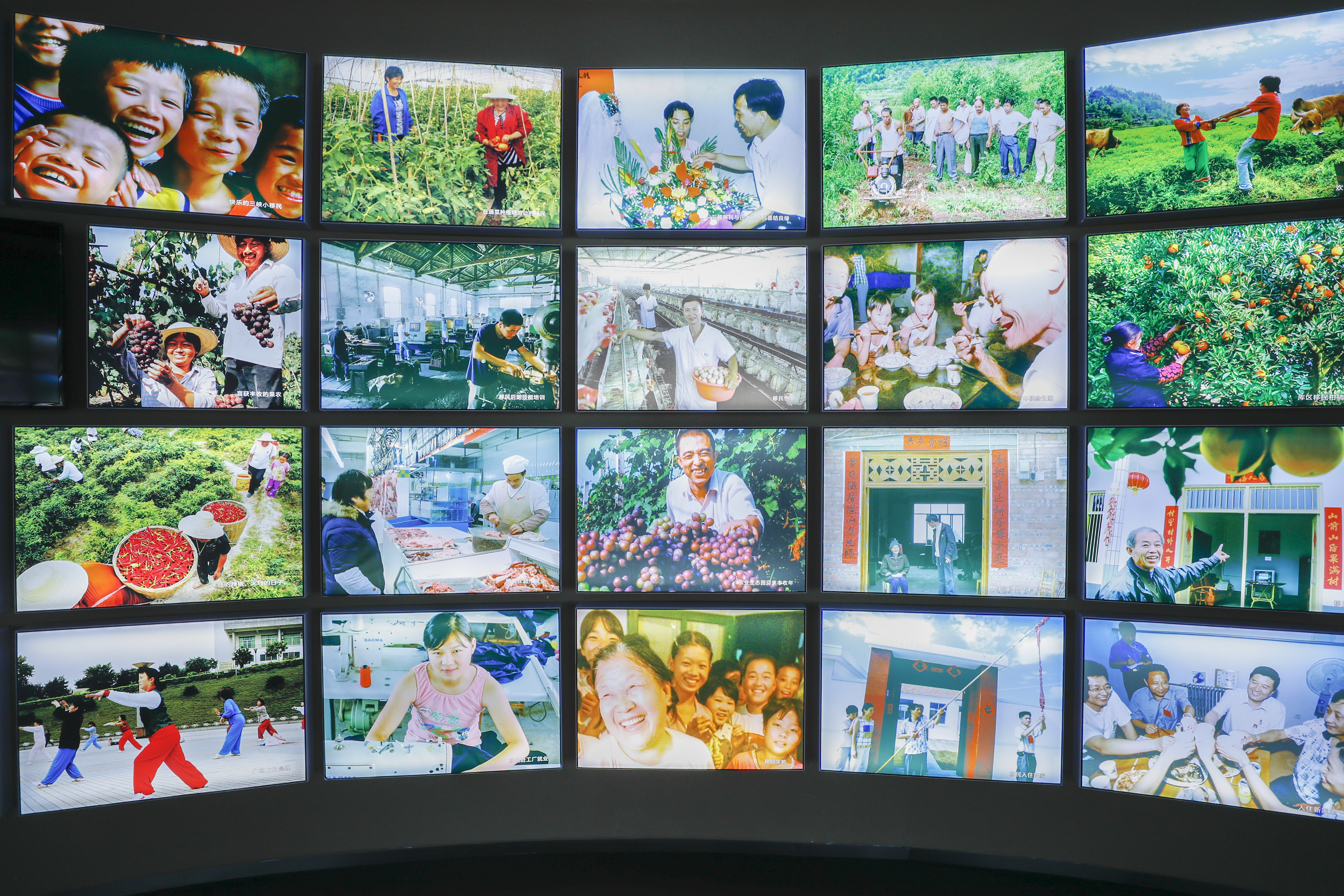 Photo taken on June 22, 2020 shows a photo wall displaying the happy life of people who have settled down after their relocation from the Three Gorges Reservoir area at the Three Gorges Migration Memorial in Wanzhou District, southwest China's Chongqing Municipality. (Xinhua/Huang Wei)

Song and his family moved to the village in 2002 because of the project. Living by the Yangtze River, the family previously managed to eke out a living by farming.

"I was worried about our future life when we moved to the village in the mountains," he said. "We could barely feed ourselves by farming on fertile land before. What were we going to do with the poor soil that was full of stones in the mountains?"

However, his worries were soon alleviated. Now Song can earn more than 200,000 yuan (about 28,500 U.S. dollars) each year by running his agritainment business, a marked improvement from the 30,000 yuan he previously earned. Boasting a number of tourist attractions with beautiful natural landscapes, the regions have taken tourism as one of their pillar industries. 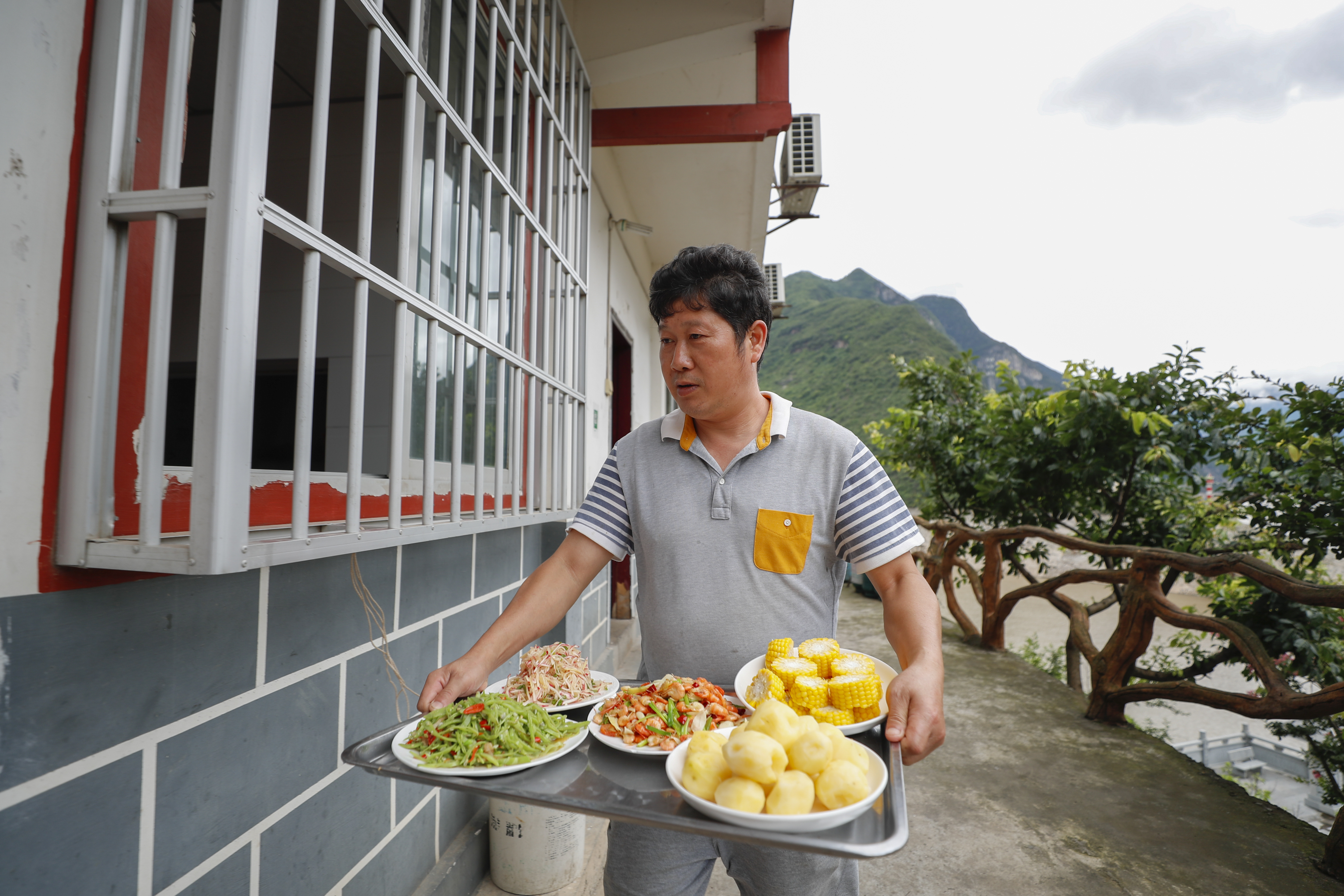 After years of struggle, Song has continued to expand his business that now covers 1,000 square meters, becoming one of the most successful in the village.

"I never thought business would be so good," he said. "The rooms and dining hall are often fully booked especially in autumn and winter, which are the best seasons to see red leaves in the mountains, a famous attraction in the county."

Wushan County has built a 5A-level scenic area, China's highest level for tourist sites, three 4A-level areas and a 3A-level area. In 2018, the county received about 16 million tourists from home and abroad and raked in a comprehensive tourism income of 6.4 billion yuan, up 17.45 percent and 35.72 percent year on year, respectively.

Besides tourism, local governments also adopted a series of supportive policies to build other pillar industries that can capitalize on the regions' many strengths. Considering the local climate and terrain, Fengjie County promoted the farming of navel oranges, helping more than 7,000 poverty-stricken households shake off poverty with over 23,000 hectares of orange trees.

"My family has planted more than 200 navel orange trees, which can produce nearly 10,000 kg of oranges and help us earn over 40,000 yuan each year," said Li Shengmei, a 48-year-old villager in the county's Santuo Village.

Wanzhou District, under the administration of Chongqing, brought in investment and built a fruit planting base covering 100 hectares in its Xiazhong Village. "I can earn more than 10,000 yuan by working at the base combined with other income. My husband works at a construction site in the district and can earn 50,000 yuan each year," said Deng Xiuying, a villager in the district. Local governments also adopted other policies including reducing medical bills and other expenses for poverty-stricken households to ease their economic burdens.

Seeing shaking off poverty as a new starting point, people in the regions are looking forward to better lives.

Li Shengmei is planning to expand the planting of navel oranges. "I have mastered the planting techniques to produce higher-quality oranges with a higher yield," Li said. "I will plant an extra 100 orange trees next year and make more money for my family."

"We plan to move to the city in the future," said Deng Xiuying. Deng and her husband have bought a house in Wanzhou District, and their daughter has found a job at a school in the district. "We believe our lives will get better and better," she added. A high-speed railway is under construction in the regions, which will connect most of the districts and counties and shorten the travel time between Beijing and Wushan County to less than five hours.

"More tourists will visit the regions when the railway opens," said Song Qinggui. "It is time to expand my agritainment business again."