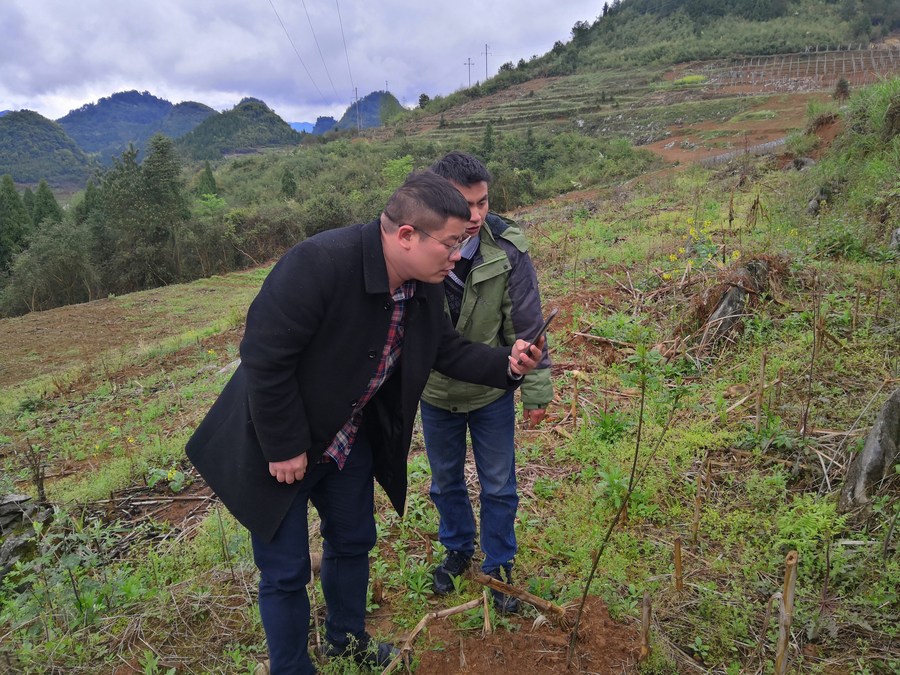 Party chief of Jiaoxi village Huang Tianlun takes a photo of a medical herb at a plantation base of villagersin Yongshun County, central China's Hunan Province, March 29, 2020. (Provided to Xinhua)

Young CPC members at the grassroot level have proved to be a vital cog in the country's campaign to stamp out absolute poverty.

CHANGSHA/URUMQI, July 4 (Xinhua) -- When Huang Tianlun decided to return to his village deep in the mountains to start up a business after a decade's working in a city, his father discouraged him. But he insisted on pursuing his dream -- to change the fate of his fellow poverty-stricken villagers.

He made it. Two years after he served as Party chief of Jiaoxi village in Yongshun County in central China's Hunan Province, Huang, 38, has successfully helped villagers shake off poverty and move into new homes in a displacement program for poverty reduction.

Huang, a native of Jiaoxi village, graduated from college in 2005 and became a journalist for a commercial newspaper in Changsha, the provincial capital. In the same year, he joined the Communist Party of China under the influence of his father, also a Party member. Becoming Party chief of a village has been his ideal since he was young.

During his college studies, Huang said he was deeply moved by a TV drama series based on a true story, featuring a doctor who went to the Pamir Plateau to help treat the sick in the northwestern Xinjiang Uygur Autonomous Region, from the eastern coastal province of Jiangsu in the 1960s.

"The doctor made great contributions to people living on the plateau. I thought the Party was really great," said Huang.

In 2014, he quit his job at the newspaper and returned to his home village, which is located in a national nature reserve, to start his own business. He developed greenhouses, sight-seeing agriculture, and sold produce. Three years later, he was elected to be a member of the Party branch of the village, and director of the villagers' committee, because of his high education background and experience. He was later appointed Party chief of the village, where nearly 70 percent of the village's 655 people lived in poverty due to its harsh natural conditions and poor infrastructure.

Though Huang's father did not support his decision to work in the village, the young man insisted and stayed.

"A poverty-stricken village needs people to come back. To eliminate poverty and vitalize the rural areas, young people are needed to do things. I wanted to take the initiative," Huang said. "I felt obliged to accomplish the mission assigned by the Party."

He said he had worries that he would meet with various difficulties as he lacked work experience in rural areas, and it was no easy task to handle villagers' affairs.

In pushing the targeted poverty reduction measures, he encountered a small setback. Precise identification meant that unqualified households would be removed from the registered list of poverty-stricken villagers. That means they would get less or no poverty-relief fund and could not enjoy other policy support for poverty-stricken families any more. He faced opposition and obstruction from some villagers, including his relatives, but he stuck to his sense of fairness.

"I kept my principles and original aspirations," Huang said.

Thanks to a government-funded relocation program, the villagers moved to their new houses in a township from their reclusive village. They also tried to plant herbs to increase incomes.

Last year, the per-capita net income of villagers reached 7,600 yuan (about 1,075 U.S. dollars), and the village shook off poverty overall. "We plan to increase the planting of the herb, and develop e-commerce to expand sales," said the village Party chief.

Like Huang, the vast rural regions have become a land of dreams and opportunities for hundreds of thousands of young Party members to serve the people and realize their value by helping farmers shake off poverty and live a better life. 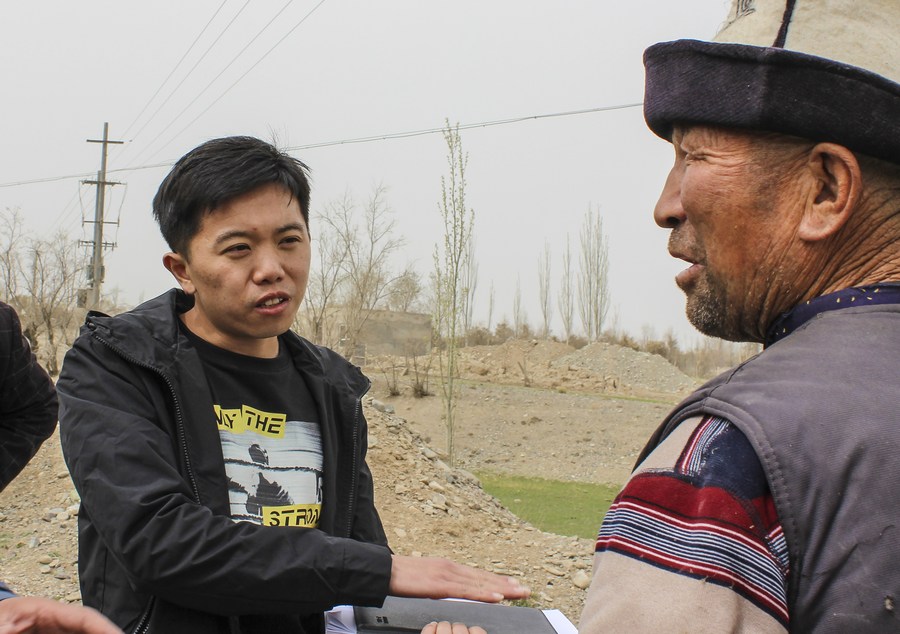 Zhou, deputy government head of Boritokay Township and also a Party member, has been working in Xinjiang since graduating from a teachers' college in Sichuan Province, in southwestern China.

The township shook off poverty in 2018. "We have done a solid job in poverty alleviation in recent years," Zhou said, adding he cares most about the families on the verge of poverty.

It is his routine to visit households, go to the fields to chat with villagers, and discuss solutions with other officials to increase the income of herders and farmers.

Last year, villagers were mobilized to plant tulips, roses, and other flowers. "The sales of these have already been booked out, and the revenue is much higher than that of vegetables," Zhou said. "One of our key tasks is to strengthen the coordinated development of agriculture and husbandry."

Hua Mengli is busy at her family farm in Jurong City, Jiangsu Province. The farm covers an area of 72 hectares and has an annual revenue of 8 million yuan. Yet the landscape was totally different a few years ago. 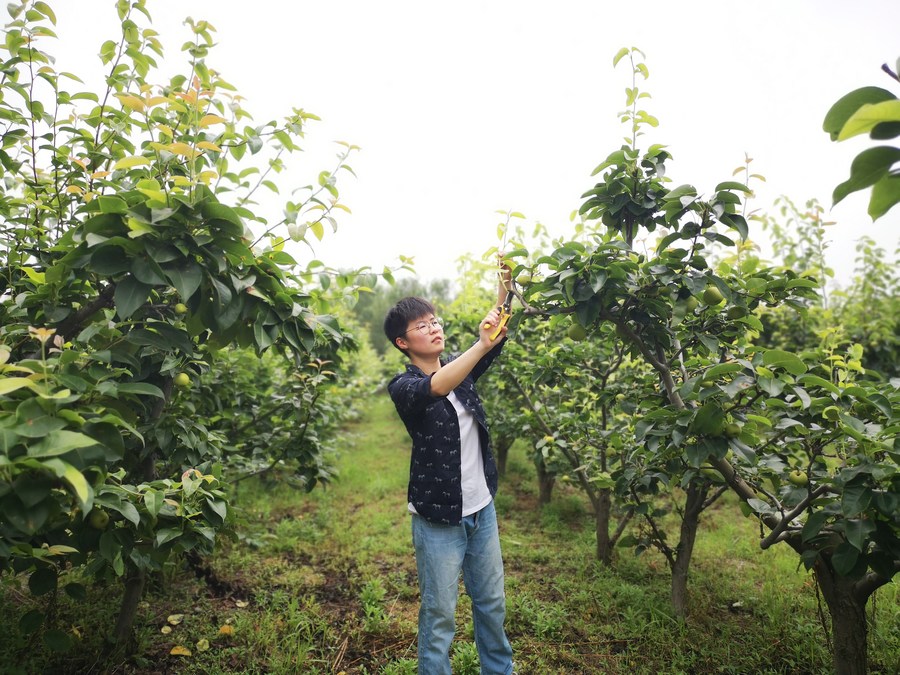 This 25-year-old girl chose horticulture technology as her major at the Jiangsu Vocational College of Agriculture and Forestry, where she joined the Party. After graduating in 2016, she gave up the opportunity to work at the college but instead chose to work in her father's farm, which was at a loss then.

She and four of her classmates now work together to operate the farm differently from her father.

"People in cities have a huge demand for rural farming experiences," Hua said. She began to shift the traditional management model to a service-oriented one. The farm provides services such as produce picking, fishing, catering, and delivery of fruits and vegetables for tourists and customers.

They even built a plant cultivation lab to foster flowers and seedlings. Last year, the farm received orders for seedlings worth 4.5 million yuan.

The farm has provided stable jobs for 12 college graduates and dozens of villagers nearby.

"Affluence is not the only criterion for success. Through our example, farmers can master more scientific planting knowledge, and protect the ecological environment, which is the greatest comfort," Hua said. ■