Xinhua Headlines: Wuhan's battle against the virus through the lens of a Xinhua photographer 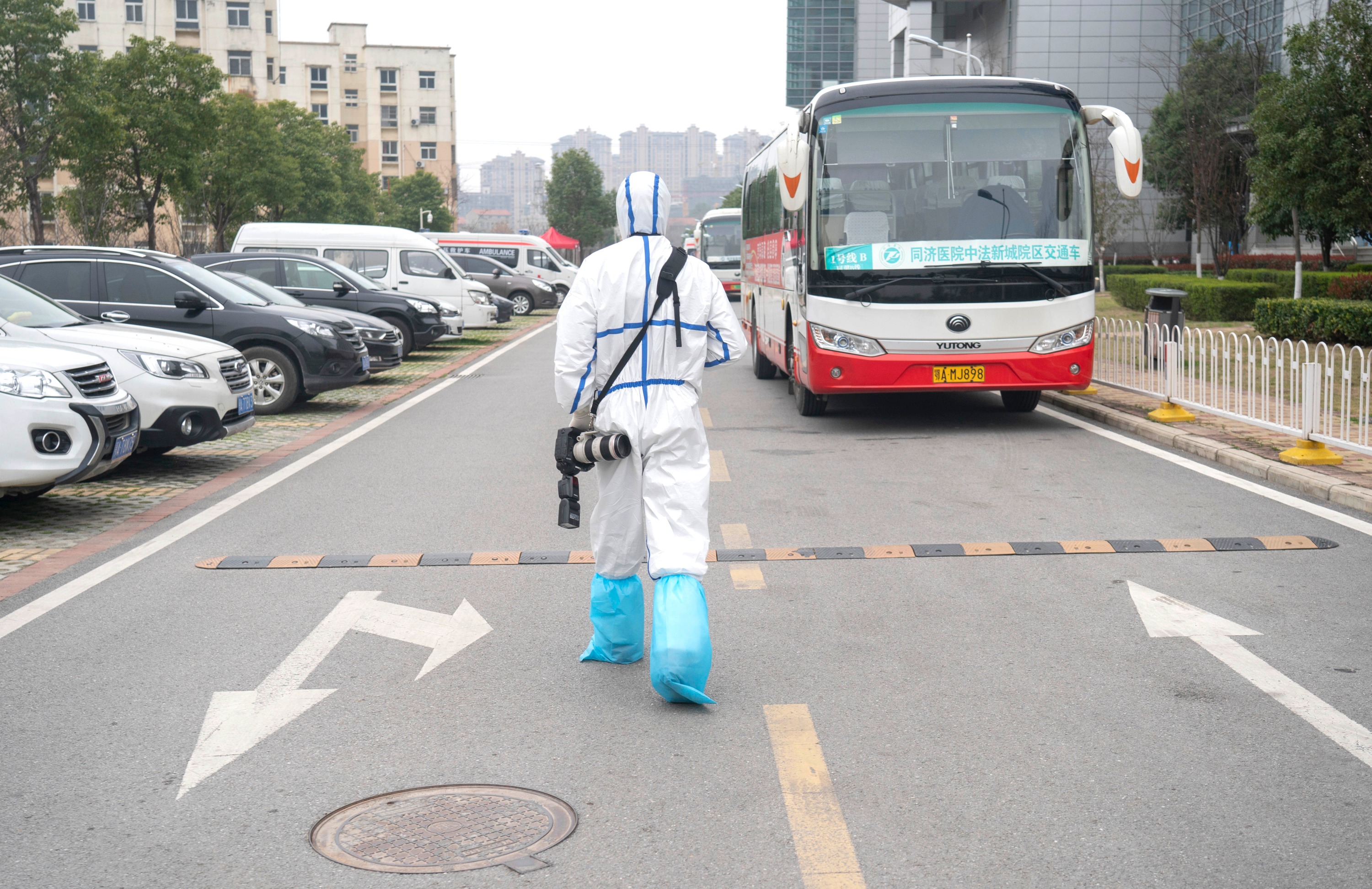 Xinhua photographer Fei Maohua has been in Wuhan since March 1. Here's his story...

WUHAN, April 9 (Xinhua) -- It was Jan. 26, the third day of the Spring Festival holiday, and I was sat at my parents' home in Kunming in southwest China when I texted my boss, "I want to cancel my holiday and go to Wuhan."

The moment I pressed send, I recalled another moment way back in 1998. I had volunteered to cover the bombing of Iraq. With the benefit of age, I'm less restless. But, the passion for my work as a journalist remains strong.

On March 1, along with two colleagues, I boarded a train to Wuhan, the hardest-hit Chinese city in the COVID-19 outbreak. We were the only passengers heading to the city, which had declared unprecedented access restrictions on Jan. 23. When we got off, I could see the bewilderment in the eyes of my fellow passengers.

So, my days in Wuhan began. 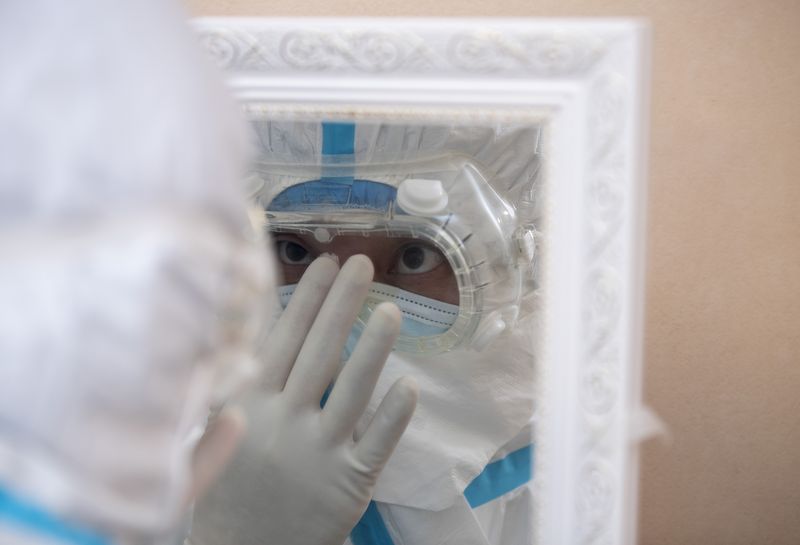 Team member Yang Hui wears protective equipment in Wuhan, March 13, 2020. Exposed to the danger of infection, they shuttle between hospitals and medical treatment stations around the clock to make sure that patients are transported to designated places in time.

Nine members from Yunnan Province, namely Liu Jianyong, Huang Jie, Yang Hui, Yao Hongjun, Wu Hongkun, Liu Mengdi, He Xueping, Pang Qingli and Yue Dingkun, made up a transferring team and went to Wuhan, on Feb. 19 to contribute to the battle against the novel coronavirus there. (Xinhua/Fei Maohua)

BE BOLD, BE CAUTIOUS

Everyone I met in Wuhan underscored the very first piece of advice I was given by my colleagues -- "Protect yourself and stay safe."

We were quickly kitted out with protective suits and goggles, and we listened to people's advice with keen ears.

Cai Yang, a photographer who had arrived in Wuhan on Jan. 28, suggested undressing outside the hotel room. So, every time I came back from a hospital or a quarantined area, I would step into my room half-naked, leaving my clothes in the corridor.

The first thing I did every time I returned to my room was to disinfect my hands and face with alcohol. It might seem a little dramatic, but you can never be too careful, can you? This frequent cleansing did have its downside, though: One day, I awoke to a stye in my right eye. It made my eye water when I tried to focus through my camera viewfinder. What was more frustrating was that I couldn't rub it!

One morning I woke up and I couldn't see through my eye. As a photographer, this was a sobering moment, I couldn't help but jump to the conclusion that this could spell the end of my career. I rushed to the bathroom and looked in the mirror -- my eye was so bloodshot, and blood was running down my face. The stye had burst. I washed my eye with running water, and the pain began to subside. The next day, I was able to work again. 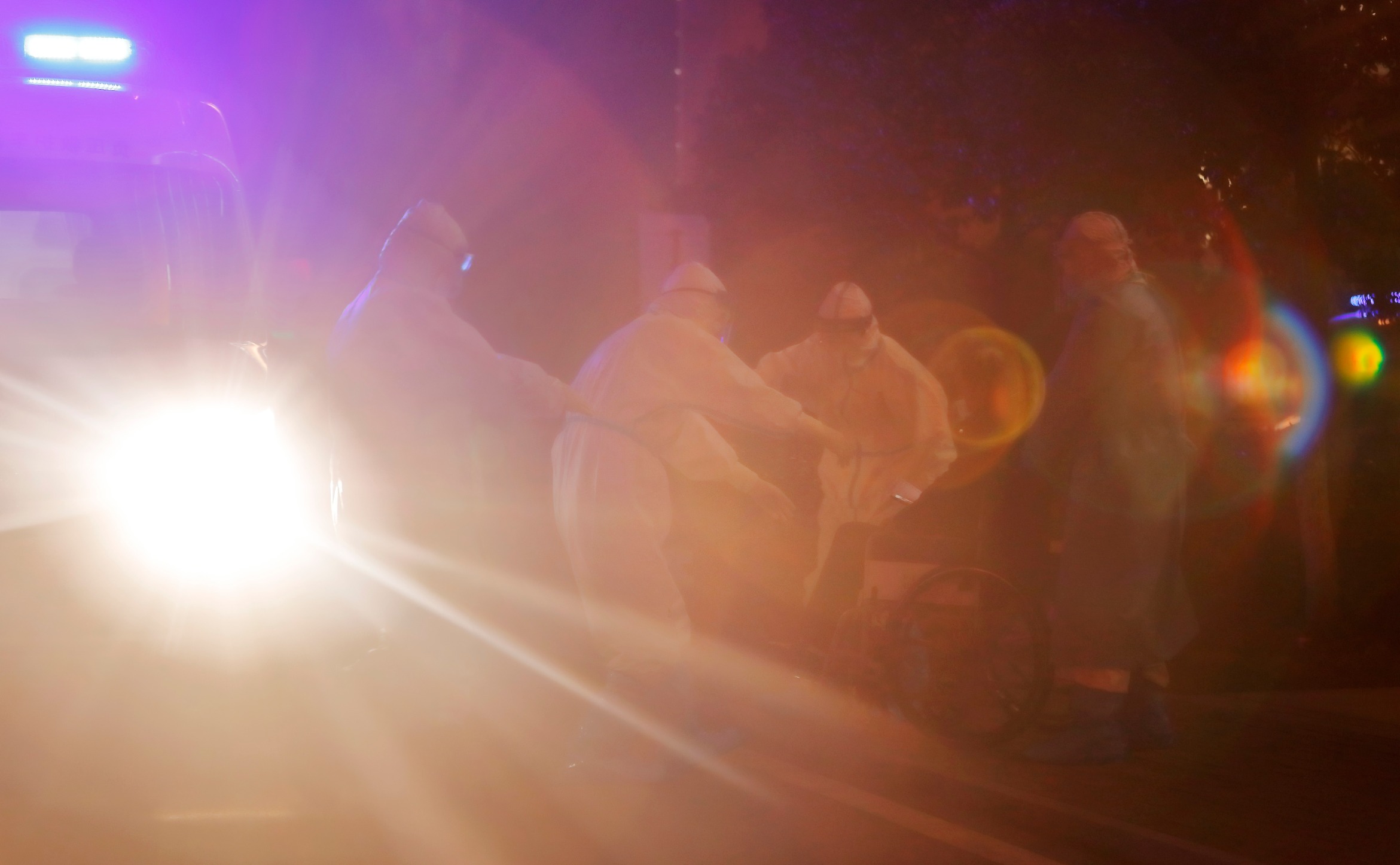 Be bold but cautious, said Xiao Yijiu, a photographer with Xinhua's Hubei Bureau.

"Of all of the medics dispatched here, none has been infected because they protect themselves well.

"But it's important to stay cautious," he said, adding that he regularly disinfected his hands and cameras.

Of course, I agreed with him wholeheartedly, except that I encountered two problems.

The first was my height. I'm a towering 1.9-meters tall, meaning few protective suits could cover my whole body. Trapped in a suit that didn't fit, I had to be extra mindful when I bent or crouched, or as I ran for shots. I was often short of breath, and I sweated a lot.

At one rehabilitation center for recovered patients, after working six hours, I felt like I was choking. "That's how drowning feels," I thought.

At a medical waste center, I was so hot that my trousers were dripping in sweat, my pants were sodden. 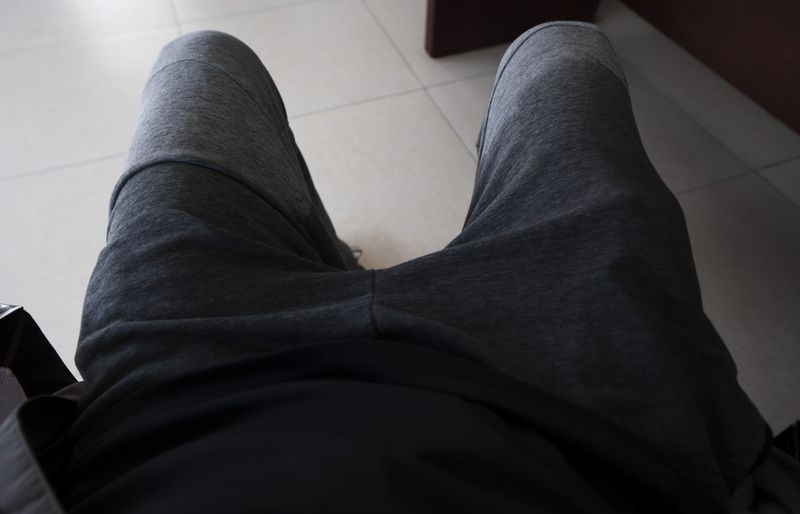 After Fei Maohua shot in a medical waste disposal center, his pants are soaked with sweat in Wuhan, March 26, 2020. (Xinhua/Fei Maohua)

I'm in awe of the doctors and nurses who had to work dressed like this every day.

The other problem came from my best friends -- my cameras. Every day when I sprayed alcohol on them after work, I prayed, "Hang in there, buddies! Don't fail me now." 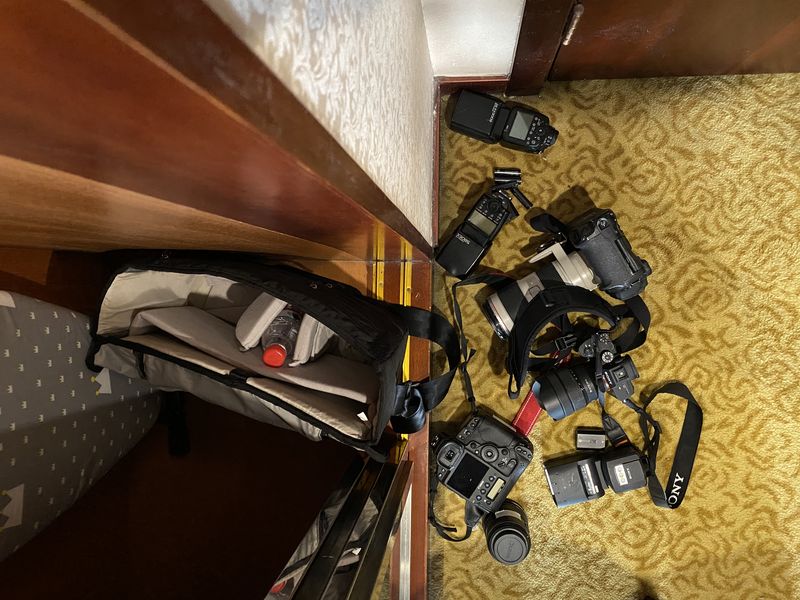 Photo taken on March 25, 2020 shows the "quarantine area" for cameras in the room of Fei Maohua at a hotel in Wuhan. (Xinhua/Fei Maohua)

As a photojournalist, I hope that the moments I have captured will become pieces of history. I hope my images will not only offer information but also record the touching stories and lives I saw. 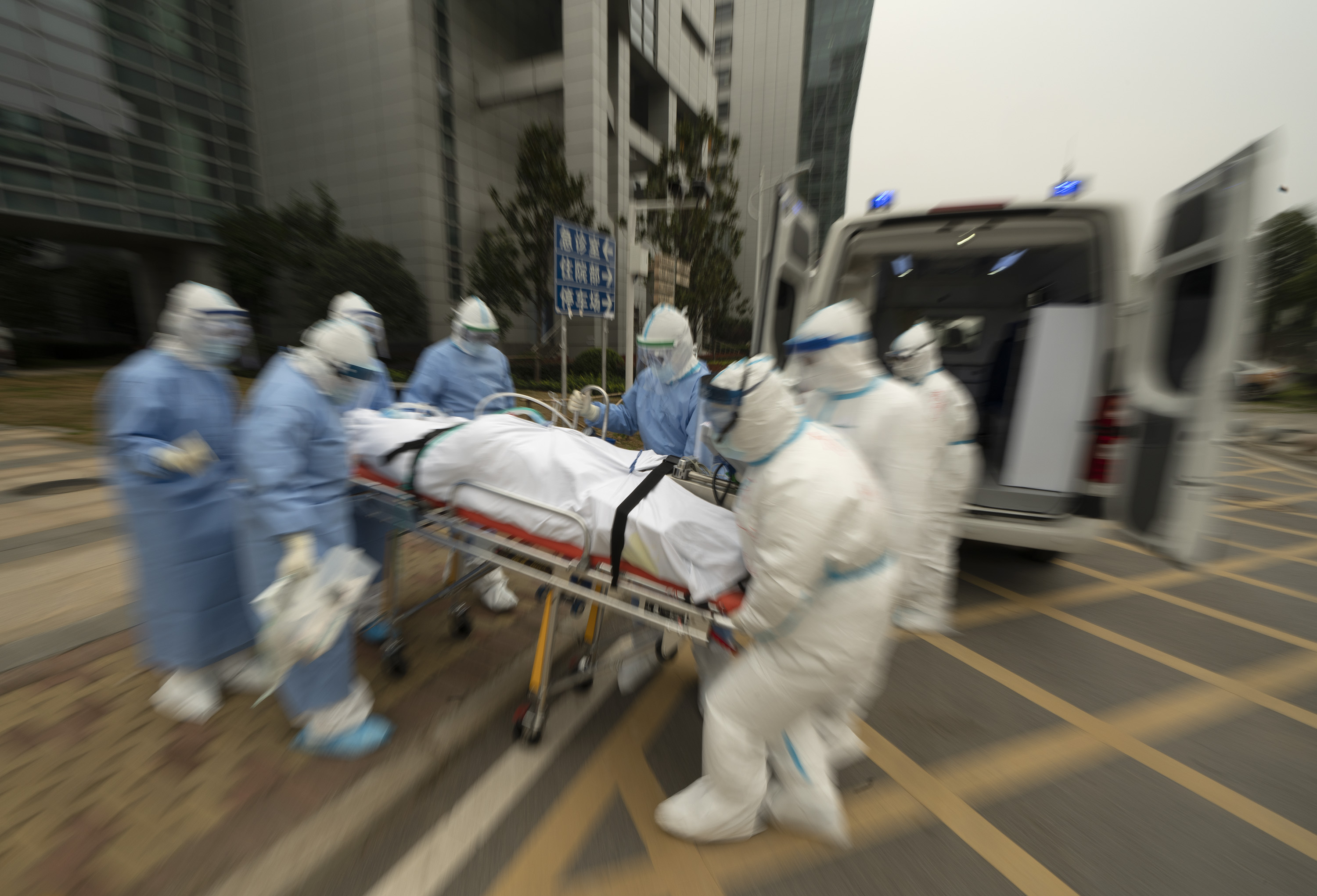 Medical workers transport a COVID-19 patient to the CT room at the Zhongfaxincheng campus of Tongji Hospital affiliated to Huazhong University of Science and Technology in Wuhan, March 6, 2020. (Xinhua/Fei Maohua)

When I arrived in Wuhan, the worst was already behind the city, and the epidemic was under control. As more and more patients recovered, one by one, the makeshift hospitals that had been converted from public venues closed.

On March 9, the last patient at Jianghan makeshift hospital, which had treated the most patients in Wuhan, walked out. I saw, through my lens, all the medics singing and dancing to celebrate this momentous occasion.

I took uncountable pictures that day, and my camera roll was full to bursting with shots of joyful medics celebrating and tearful patients waving goodbye to the people who had helped them. But my colleagues and I decided not to leave, so we waited at the exit.

At around 5:00 p.m., Lu Chong, the last doctor on duty at Jianghan, left. She stood at the gate for a long time, as if she was trying to process what had happened. At last, she turned around and waved to the building where she had battled for over a month. 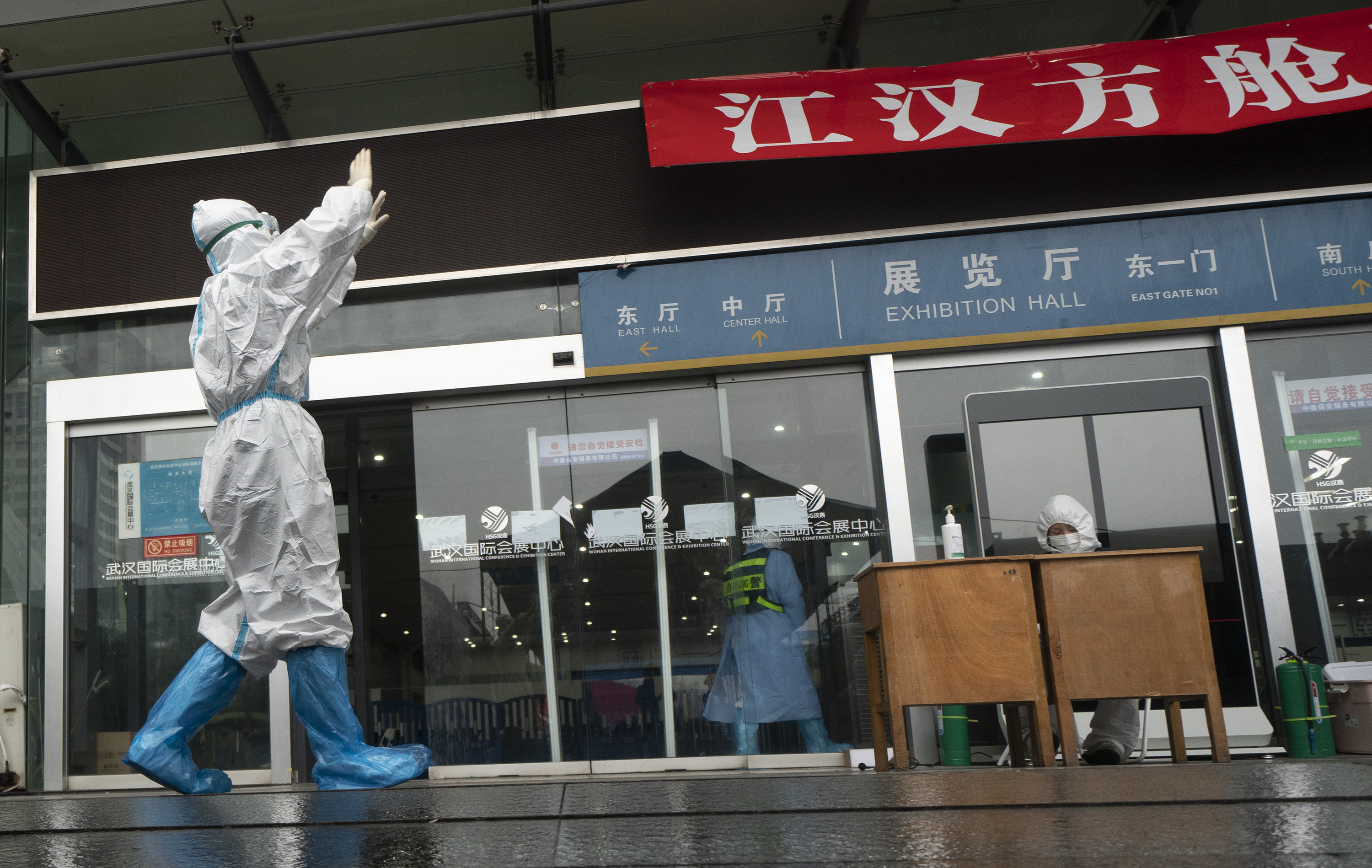 Lu Chong (1st L), a doctor from Wuhan Union Hospital, waves goodbye as the last medical worker walking out of the temporary hospital of Jianghan, in Wuhan, March 9, 2020. (Xinhua/Fei Maohua)

"The hospital is closed, and I feel excited. All the patients have left in good health. We did it!" Lu choked.

Inside the hospital, patients played chess or listened to music, one invited the medics to dance.

Despite all the merriment, two medics sat in a corner caught my eye. They weren't talking. They were just leaning on each other, as still as statues, with sunlight filtering through the window behind them. It was as if time stood still.

I held back asking them about the past month or if they were exhausted. I didn't want to disturb the peaceful moment. I just pressed the shutter and walked away. 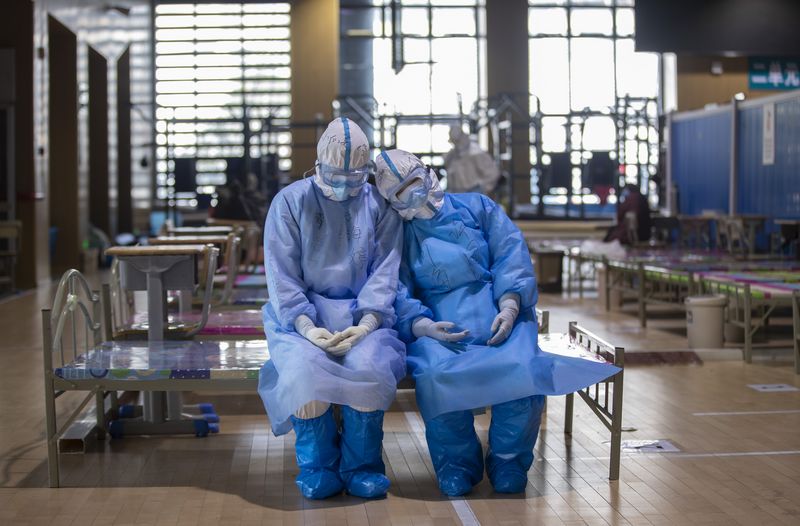 The two medics brought back memories of three other people in corners. At Jianghan, not far from the jubilant crowds, stood three silent women. When they noticed I had turned my camera on them, they gesticulated toward their vests, the characters read, "toilet janitor." 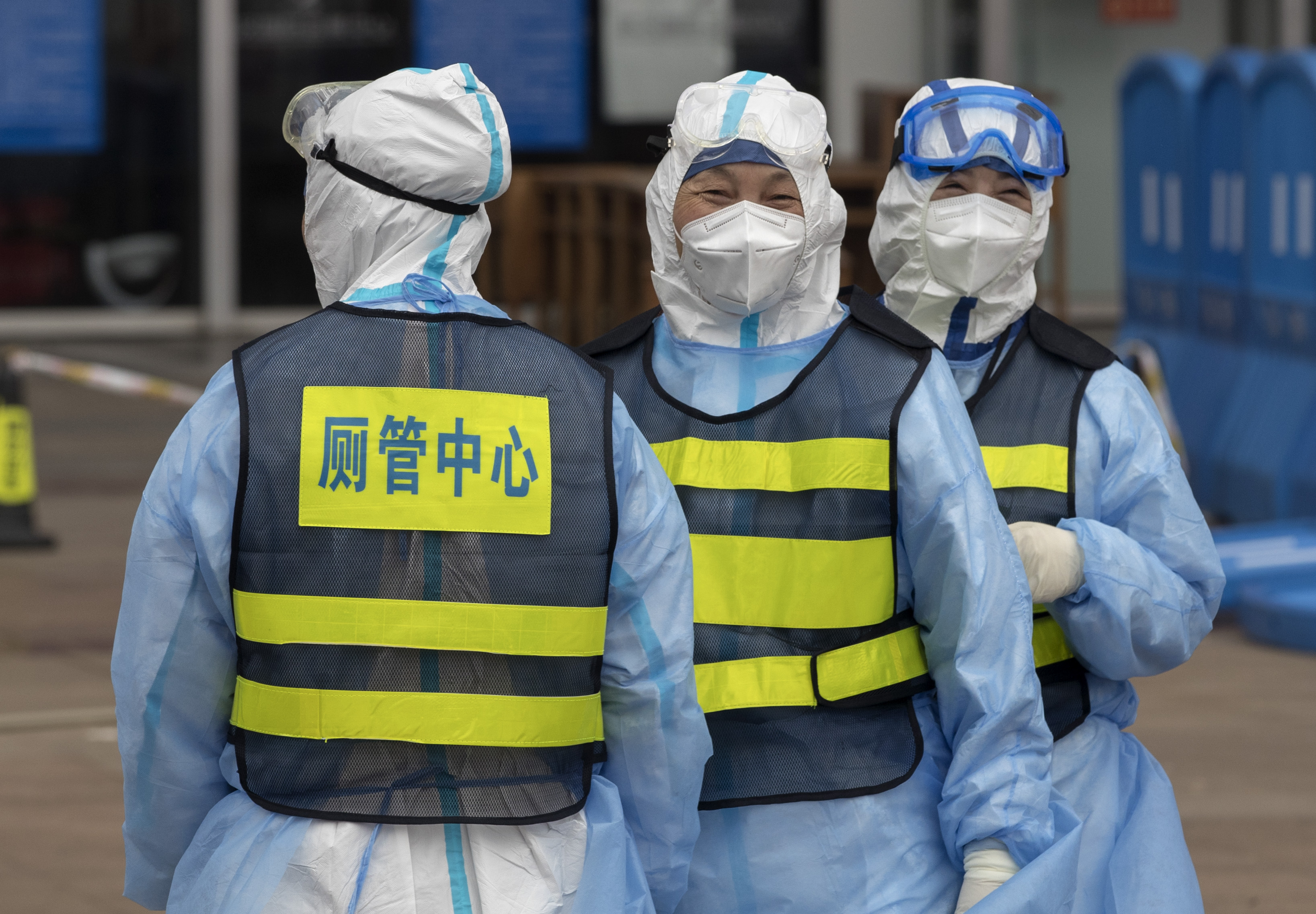 Later, a security guard at the hospital told me that apart from the medics, the toilet janitors were the most admirable people here.

"It's said that fecal-oral transmission is possible. So, the janitors wash the facilities after every patient uses it," he said. "Think about it, would your mother do this for you at home?"

I was moved by his words. I rushed back, hoping to take better photographs of them. But they had left.

People like those three women can be found all over Wuhan, throughout Hubei Province, and across the country. Ordinary people doing extraordinary things. They might not be as visible, but they are just as admirable. 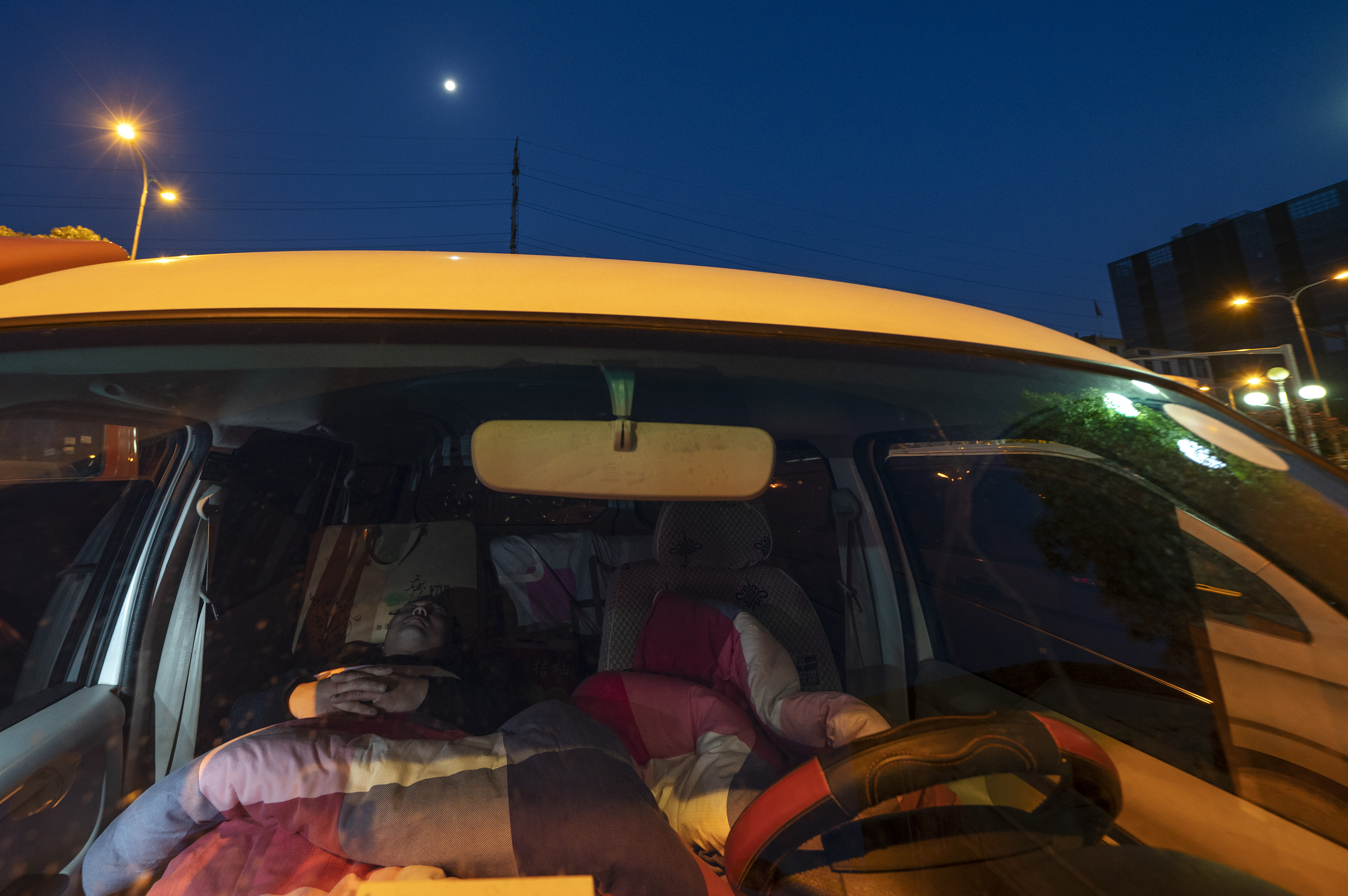 Ma Zengchen, a food courier, started work at 2:00 a.m. every day to ensure around 80 housebound families were well-fed. He wouldn't rest until 9:00 p.m. or even midnight. He had been working like this for almost two months by the time I met him.

"It's not about making money. It's a risky job meeting so many people every day. But if we don't work, the people of Wuhan would starve," he told me. 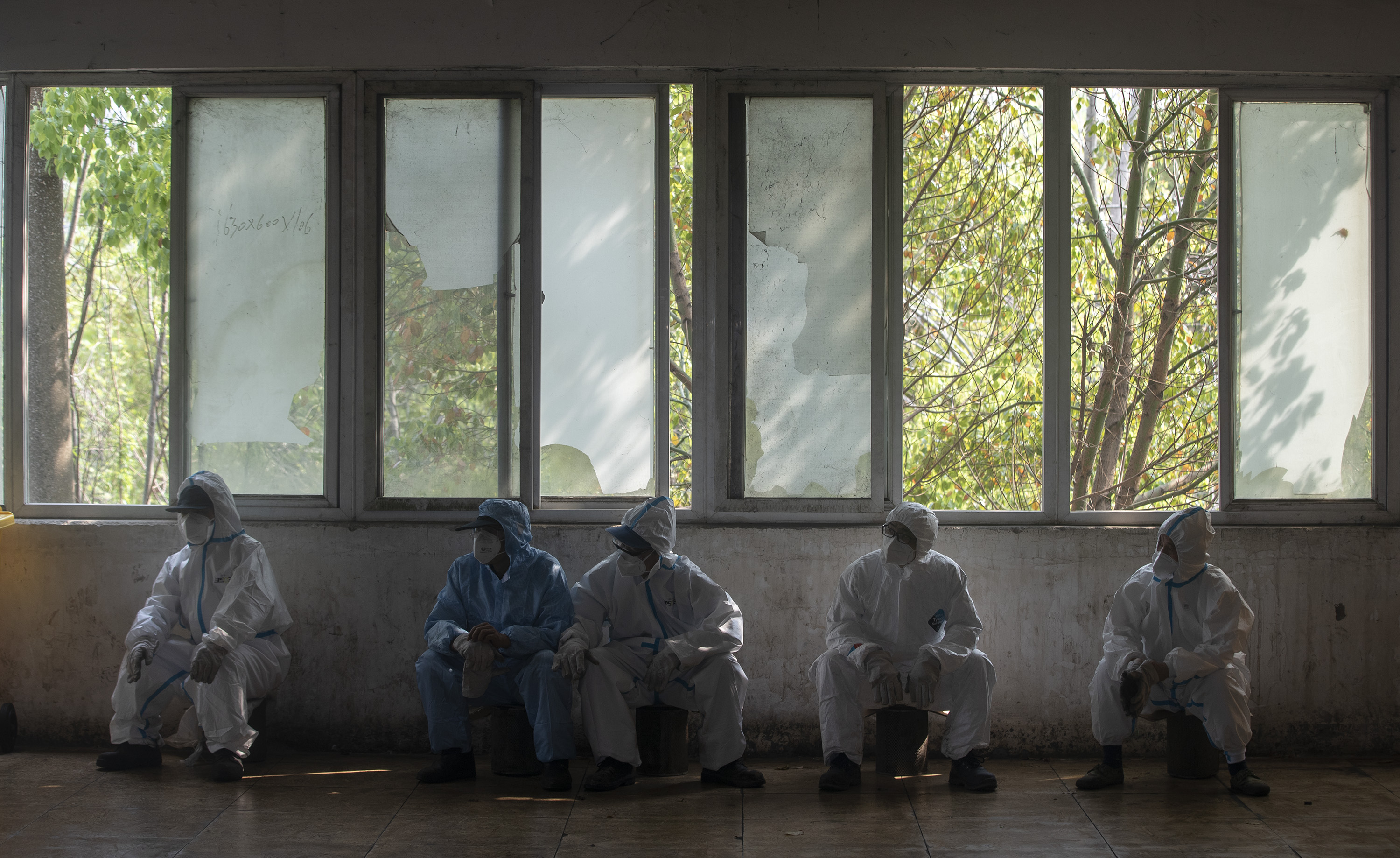 Wang Peng (2nd R) chats with his colleagues at the Wuhan Hanshi Environmental Engineering Company in Wuhan, March 26, 2020. Wang, 35, has been working for the company for 9 years.

"I like what I'm doing," Wang said, "I'm not only making money for my family, but also making a contribution to the society."

Wang has not been home for over 2 months. The most relaxing moments for him is when he talks to his family through video chat. "I'll come home as soon as I defeat the disease," Wang said to his son. (Xinhua/Fei Maohua)

Wang Peng's job was even more dangerous. Working in a medical waste disposal center, he was as much at risk of exposure to the virus as the medics, and he did this for 12 hours a day.

"It was my job to support my family. Now it's my job to help the country," Wang said. "I won't stop working until everyone is cured."

Janitors, couriers, waste collectors, and even housebound residents, my camera roll was stuffed with photos of them. They were just doing their part. They were all warriors in this battle against the virus. 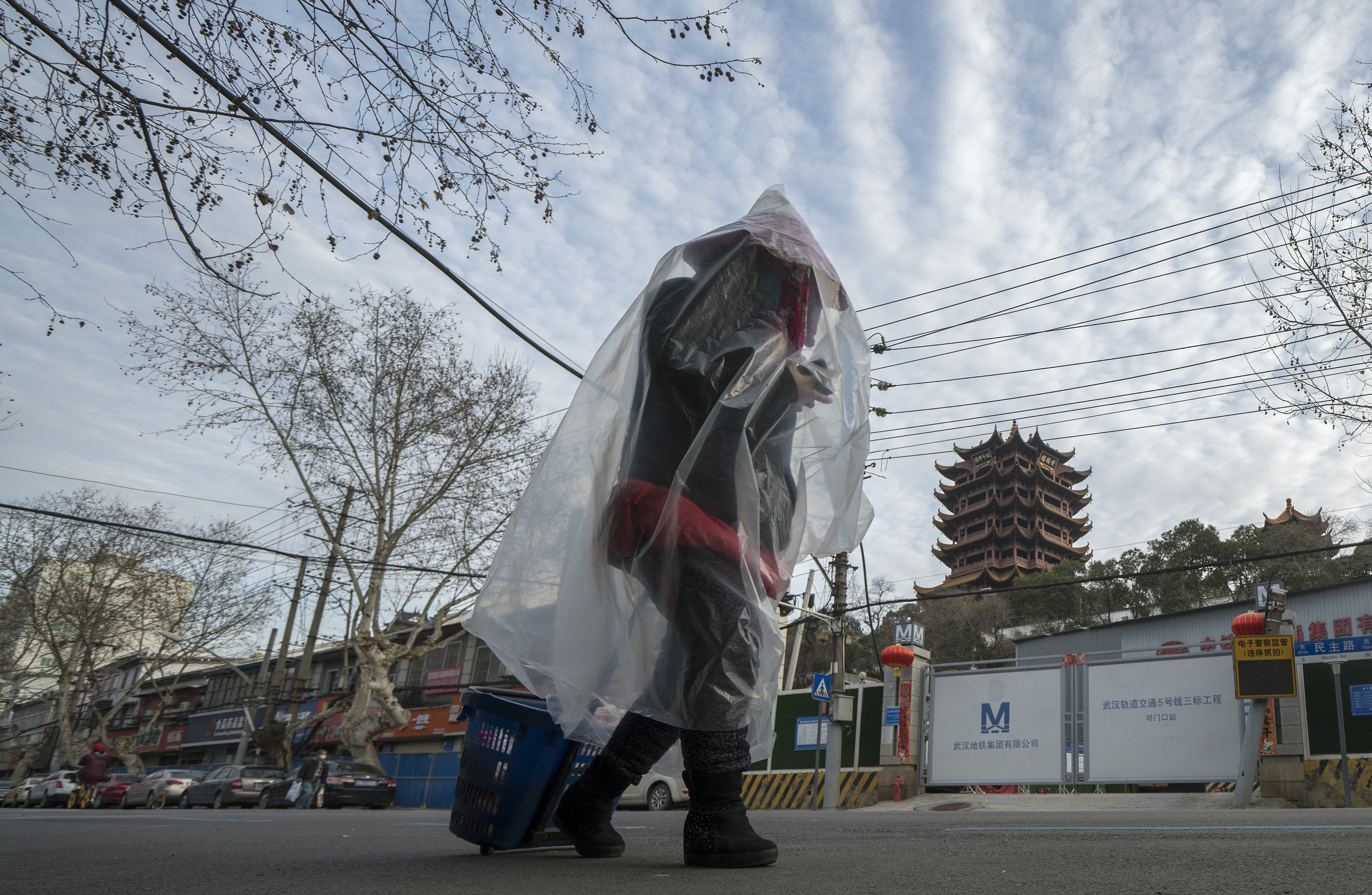 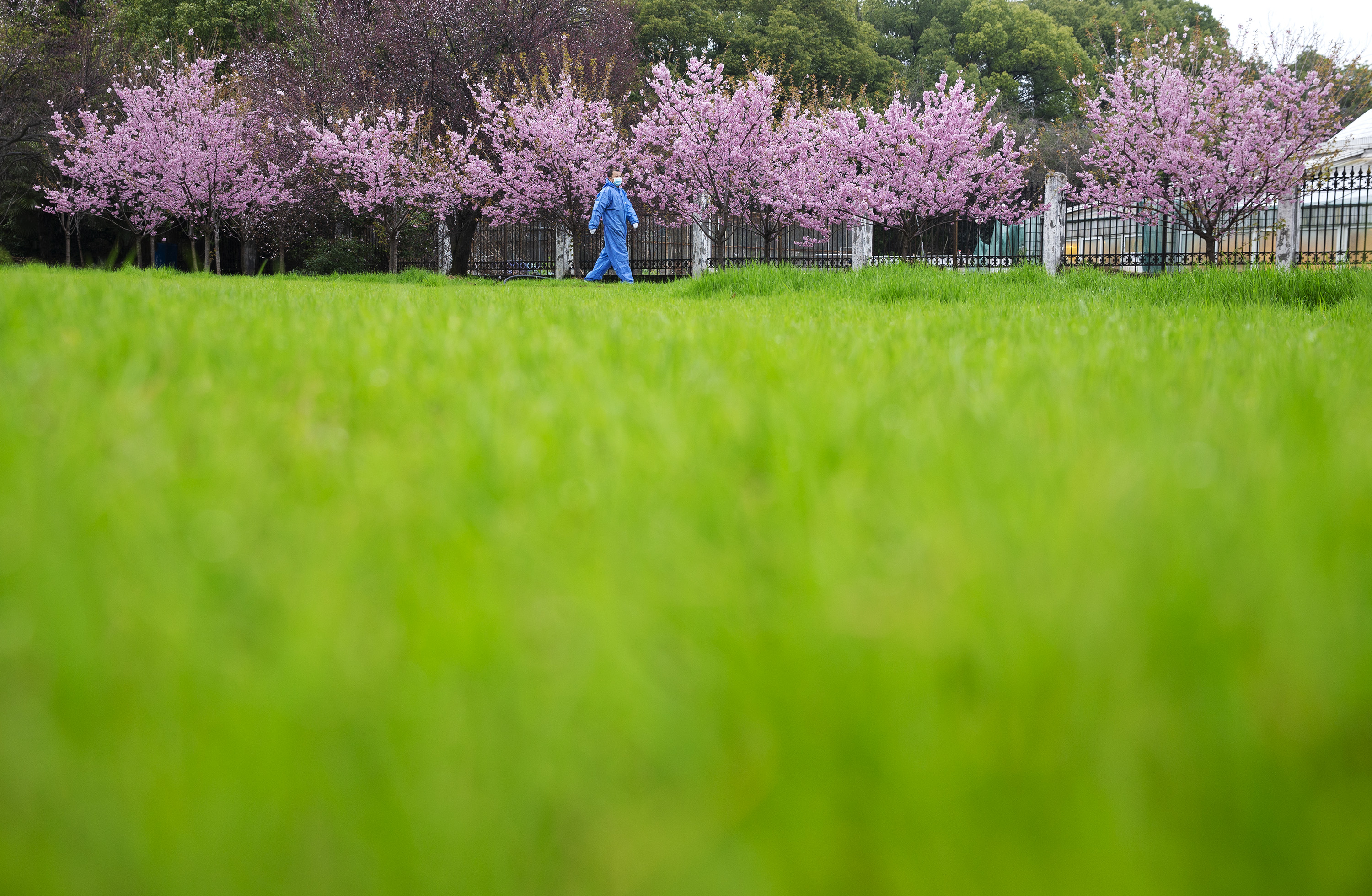 I never told my parents that I went to Wuhan. They are too old to worry about me.

I missed a call from my mom when I was taking photos in a hospital. I called back, my mom asked, "Why didn't you pick up the phone? Are you in Wuhan?"

I didn't know whether she believed my excuses. But when the situation improves and I finish my work here, I will make my way back to my parents' home and sit them down to explain everything to them.

(Editor's Note: This article was originally written in Chinese by Xinhua photographer Fei Maohua based on his personal experience in Wuhan, and was translated into English by Xinhua writer Xue Yanwen.)■