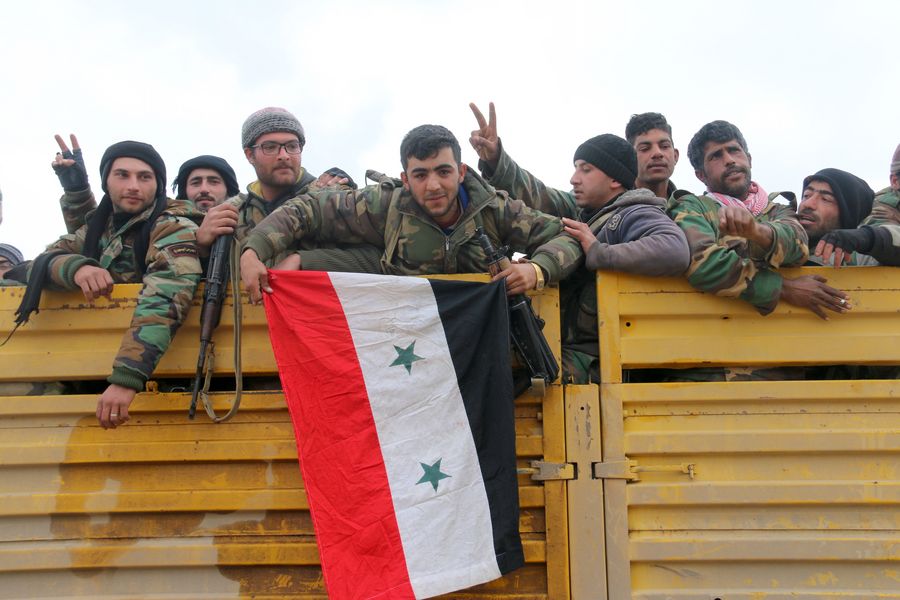 Syrian military personnel holding a Syrian flag are seen in the town of Tal Toukan, the countryside of Idlib Province in northwestern Syria on Feb. 5, 2020. (Xinhua/Str)

Amid escalation with Russia-backed Syrian forces in Idlib, the last rebel stronghold in Syria, Turkey is now calling on its Western allies to lend support including deployment of U.S. Patriot missile systems on the border.

ANKARA, Feb. 21 (Xinhua) -- Turkish Defense Minister Hulusi Akar said Western allies of Turkey should lend support in the face of threats from Syria and the deployment of U.S. Patriot missile systems in Turkey is on the agenda.

"They previously sent air defense batteries. Our country is threatened by airstrikes and missiles. So there might be Patriot (missile) support. NATO Secretary-General Jens Stoltenberg is closely watching the situation, and there might be further action and plans coming from their side," Akar said during a televised interview to CNNTurk late Thursday.

When asked about the interference of the U.S. troops in Idlib, Akar ruled out the possibility.

Highlighting the humanitarian crisis in Idlib, the minister said the "active support" of the international actors is just as important as words.

"We're aware of a request for Patriot systems but understand no decision has been made," said the official, speaking on condition of anonymity.

Ankara and Moscow have held two rounds of talks in a bid to calm down tension in Idlib but have yet to reach a solution. Turkish officials threatened to resort to military offensive if the Syrian government does not retreat in Idlib Province.

The Turkish and Russian delegations will continue discussions next week after the Turkish side declined a Russian proposal to withdraw rebels to a certain area in Idlib.

The two countries discussed the use of Syrian air space in Idlib and the problem can be overcome if Russia "steps aside," Akar said, adding Turkey hopes Russia will not get involved in the situation.

"We do not aim for a face-off with Russia. This is out of the question. We have done everything in our power to prevent this from happening, and we will continue to do so. The most important thing now is for the Syrian government to comply with the cease-fire," the minister noted.

On Thursday, Ankara accused a Syrian government airstrike of killing two Turkish soldiers in Idlib and wounding five others. raising the number of Turkish personnel killed by Syrian forces this month to 16.

Some of the Turkish observation posts in Idlib are being surrounded by Syrian government forces, but Ankara says it will not evacuate the positions or move them.

In the contrary, the Turkish military has increased its military build-up in Idlib for the past few weeks as the Turkish leadership has threatened an intervention by the end of February if the Syrian forces do not withdraw to their positions specified in the Sochi deal which was brokered by Russia and Turkey in 2018.

Earlier in the day, Turkish President Recep Tayyip Erdogan said he will decide his stance on Idlib after a phone call with his Russian counterpart Vladimir Putin later in the day.

"The outcome of the discussion will determine our attitude," he said.

Speaking to reporters, Erdogan said 150 members of the Syrian forces have been killed in Idlib, noting it is not possible for Turkey to withdraw its troops unless Damascus stops "oppression" in Idlib.

Also on Friday, Erdogan had a phone conversation with the German chancellor and the French president over the escalation in Idlib.

Germany and France have proposed a four-way meeting on the Syria crisis on March 5, but Putin has not responded yet. ■