Spotlight: WTO's Appellate Body locked out due to U.S. blockage 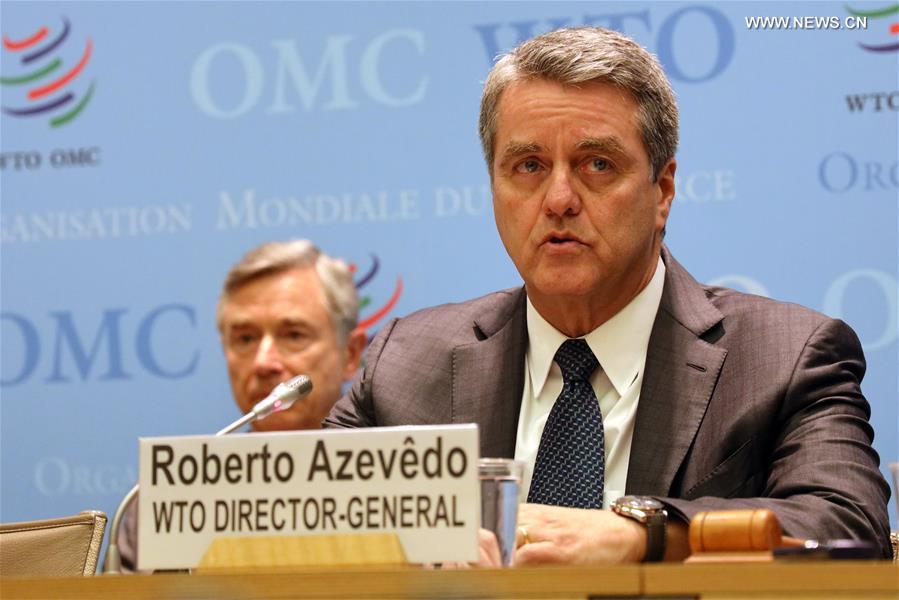 World Trade Organization (WTO) Director-General Roberto Azevedo (Front) speaks at a press conference after a two-day meeting of the WTO's General Council in Geneva, Switzerland, on Dec. 10, 2019. Roberto Azevedo said here Tuesday that as of Wednesday, the Appellate Body would be unable to hear new appeals. (Photo by Peter Kenny/Xinhua)

The body, the de facto court of appeals at the WTO, will be unable to hear any new cases because it only has one judge left on Wednesday due to repeated blockage of the nomination of its members by the United States.

At a regular meeting of the WTO Dispute Settlement Body on Nov. 22, Mexico, on behalf of 117 WTO members, suggested again that the selection process for new judges in the Appellate Body be initiated to fill current and upcoming vacancies.

In reaction, the United States said it did not support the proposal for starting the selection process, as the "systemic" concerns it previously raised had not been addressed.

The Appellate Body has seven judges elected for a 4-year term, and they can be re-elected once. In the selection process, WTO members follow the consensus principle, which means that the nomination of the Appellate Body members can only proceed smoothly with the agreement of all 164 members.

Since 2017, the United States has unilaterally opposed the launching of any selection process for new judges, citing the so-called "systemic" problems of the dispute settlement mechanism.

Due to repeated blocking from the United States, only three judges remained in the Appellate Body, and as the term of two of those ended on Wednesday, the body now has only one judge in office.

As any trade appeal must be heard jointly by three judges, the Appellate Body will be unable to accept any new cases due to lack of judges, and will fall into an effective "lockout" state.

Some WTO members have expressed concerns over the impact that the "lockout" of the Appellate Body will have on the international economic and trade order.

At the Nov. 22 meeting, a Norwegian representative warned that "winter is coming."

The WTO may authorize trade retaliations against members who refuse to enforce the rulings of the Appellate Body. For this reason, the WTO is dubbed an international organization with "teeth."

Without the Appellate Body, the WTO would only be able to issue a panel report on a dispute without enforcement, and its ability to force members to comply with international trade rules will be significantly weakened.

Roberto Azevedo, director-general of the WTO, has warned that if global trade rules are not effectively implemented, the world economy would return to an era of the "law of the jungle."

Facing the paralysis of the Appellate Body, some WTO members came up with temporary alternatives. The European Union, Canada and Norway have stated that they would initiate a "temporary appeal arbitration" procedure during the "lockout" of the body.

Hua also said that despite the crisis facing the body, the efforts by all sides to safeguard the multilateral trading regime will not stop, and a solution to maintaining the running of the WTO dispute settlement mechanism is being studied.

Besides, there are also trade experts suggesting that both parties to a dispute can negotiate and accept the panel report as the final ruling, thereby keeping the dispute settlement from becoming "unresolved."