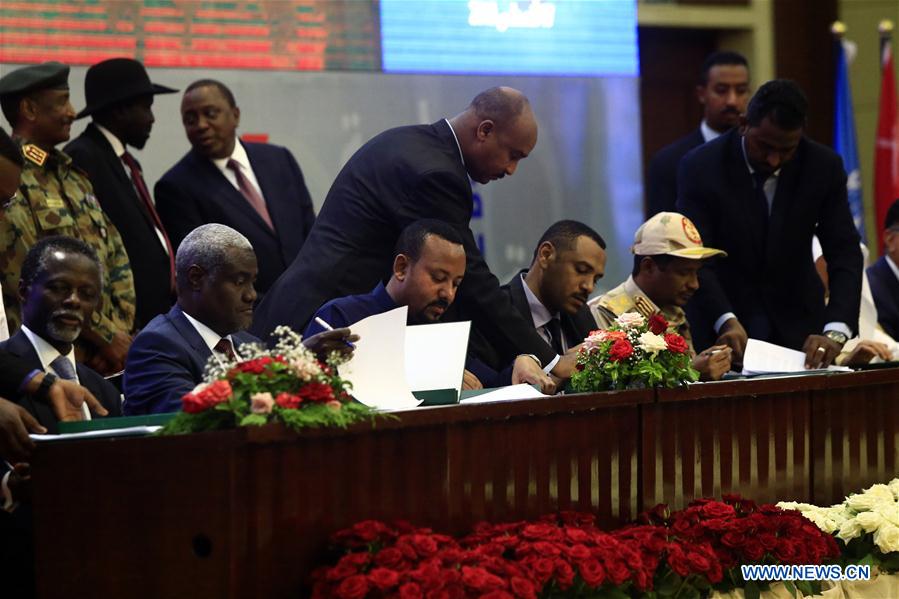 Representatives sign the documents during the signing ceremony of the political and constitutional declarations in Khartoum, Sudan, on Aug. 17, 2019. Sudan's Transitional Military Council (TMC) and the opposition Freedom and Change Alliance on Saturday officially signed the political and constitutional declarations to mark beginning of the transitional rule in Sudan. (Xinhua/Mohamed Khidir)

KHARTOUM, Aug. 17 (Xinhua) -- Sudan's Transitional Military Council (TMC) and the opposition Freedom and Change Alliance on Saturday officially signed the political and constitutional declarations to mark beginning of the transitional rule in Sudan.

The TMC's Deputy Chairman Mohamed Hamdan Daqlu signed on the two documents on behalf of the military council, while Ahmed Rabie, a leading member of the Freedom and Change Alliance, signed for the alliance.

Some senior officials of states and organizations, including prime ministers of Egypt and Ethiopia, signed on the documents as witnesses.

Before the beginning of the signing ceremony, Sudanese folkloric bands performed traditional songs and dances in front of the Friendship Hall, the ceremony site, to welcome the guests participating in the event.

The moment the documents were signed, the hall burst into applause by dozens of citizens who repeated slogans such as "civilian ... civilian," "Freedom, Peace and Justice."

Outside the Friendship Hall, hundreds of citizens gathered on a bridge overlooking the hall, raising Sudan's flags and signs bearing "Sudan's Joy" which is the motto of the celebration.

At the Freedom Square, some 15 km southeast of the Friendship Hall, thousands of Sudanese citizens gathered to follow the signing ceremony of the two documents through giant screens inside the square.

Representative of the Freedom and Change Alliance Mohamed Naji El Asam said "Thanks to blood and sacrifices, this day has become a reality after it was a distant dream."

He added that signing the documents marks a new phase, vowing that comprehensive peace is a priority.

Justice and judicial accountability are also among top priorities of the coming transitional government and the judicial institutions, he noted.

Leader of Sudan's opposition National Umma Party Sadiq Al-Mahdi said the signing of the documents constitutes "a day for entering the civilian rule which will place peace as a priority and then institutes for democracy."

The coming phase is a test where there would be no exclusion with the doors open for everybody to participate in building the Sudan, he added.

The TMC's Chairman Abdel-Fattah Al-Burhan stressed the importance for all components of the community to work together to achieve the goals of the revolution.

"Now we have surpassed the phase of preparation and are heading towards the phase of construction," said Al-Burhan.

He vowed that the Sudanese Armed Forces and other regular forces would protect the revolution and ensure the civilian transition.

Members of the mediation team have also been honored during the signing ceremony.

Shortly after the conclusion of the signing ceremony, thousands of Sudanese people took to the streets of the capital Khartoum in celebration of the event which constitutes a real beginning of the transitional period.