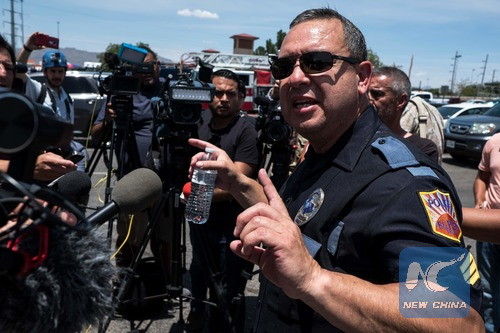 El Paso Police Department officer briefs media on a shooting that occurred at a WalMart near Cielo Vista Mall in El Paso, Texas, on August 3, 2019.(Xinhua/AFP)

HOUSTON, Aug. 3 (Xinhua) -- Twenty people were killed and 26 others wounded on Saturday after a shooting at a shopping center in El Paso in U.S. state of Texas, local officials said at a press conference.

Police spokesman said that a white male in his 20s was in custody, and investigations are underway to determine what happened during the Saturday's attack.

El Paso Police Department tweeted a notice, confirming that there are no threats to other locations or venues in the city, and urging people to donate blood. "Blood needed urgently. Multiple injured transported to various hospitals," the police said in the message.

Police identified Walmart in a shopping area, about 13 km east of downtown El Paso, as one of the active scenes.

El Paso, which has about 680,000 residents, sits across the border from Juarez, Mexico.

Texas Governor Greg Abbott called the shooting "a heinous and senseless act of violence" and said the state had deployed more law enforcement officers to the city.

The U.S. Customs and Border Protection (CBP) said its personnel help provide perimeter security and medical aid to victims. "All ports of entry are open for business in El Paso and outlying locations as #CBP continues to monitor the active shooter situation," it said in a Tweeted message.