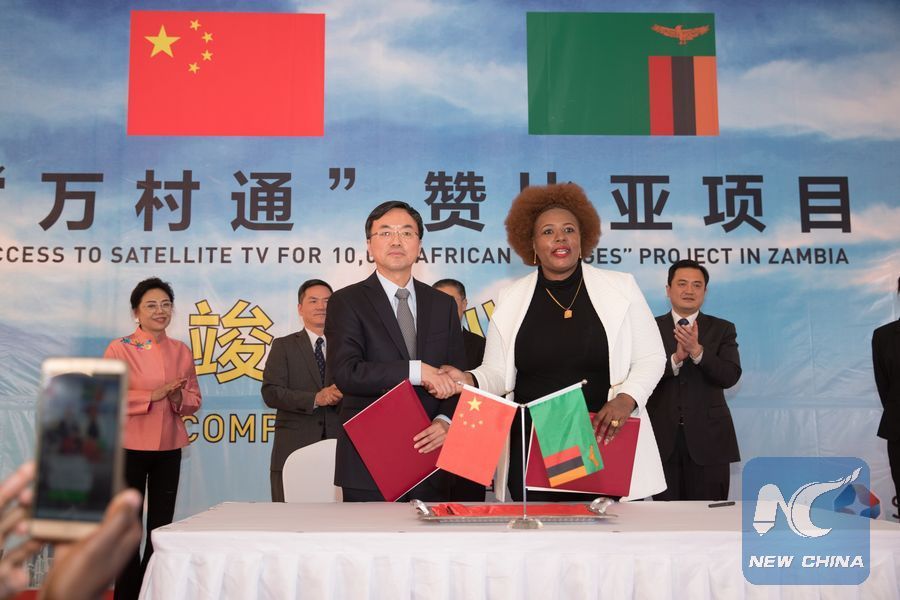 File photo shows Dora Siliya (R, Front), Zambia's Minister of Information and Broadcasting Services, and Zhang Maoyu (L, Front), Vice Chairman of ChinaInternational Development Cooperation Agency, pose for a photo after signing the handover documents during the completion ceremony of aChina-funded village TV project in Chongwe, Lusaka Province, Zambia, on June 13, 2019. China handed over to the Zambian side on Thursday a completed project providing hundreds of local villages access to satellite TV. The project, which was officially launched in June last year by President Edgar Lungu, saw the installation of satellite television sets in 500 villages in the country's 10 provinces. (Xinhua/Peng Lijun)

LUSAKA, July 29 (Xinhua) -- A Zambian peace and development expert has urged African governments to continue enhancing China-Africa relations stating that the continent still has a lot to learn and share with China given that country's economic success.

Lawrence Banda, who is Universal Peace Federation-Zambia Chapter Vice Secretary General told Xinhua that it is in the best interest of Africa to continue to further enhance Africa-China relations as China has demonstrated unwavering support to Africa.

Banda further commended China for assisting African governments to meet people's growing demands for services and infrastructure within a short period of time.

"In the case of Zambia, we now have in place ultra modern health, telecommunications as well as education facilities and road networks that have been put up with the support of China," he said.

Banda observed that even after 55 years of Zambia-China cooperation, China has remained committed to the development of Zambia and the whole of Africa, which is witnessing unprecedented infrastructure development supported by China.

According to him, a good number of African governments do not want to engage entities that insist on economic reforms that do not serve the interest of African populations.

China's support allows African governments to have access to finance, expertise and investment capital without much stress, Banda observed.

He was, however quick to point out that it is the responsibility of African countries to ensure that they use the support from China judiciously and in ways that promote sustainable growth.

"We have the natural resources and they have the technology and expertise to help grow economies in Africa; so let us engage them at that level," Banda advised.

He further appealed for more Chinese investment in the Zambian agriculture sector, with a particular focus on livestock production.