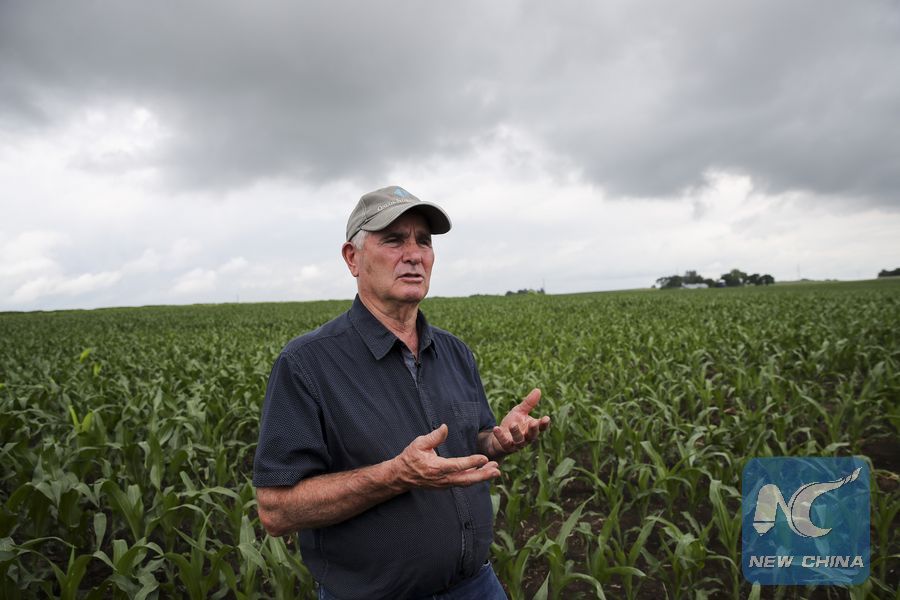 Farm owner Bill Pellett speaks during an interview at his corn field in his family farm in Atlantic, a small city in the Midwestern state of Iowa, the United States, June 18, 2019. From cattle feeders in Iowa to pecan growers in Georgia, U.S. farmers are worrying about further damage caused by market uncertainties as trade tensions between the world's two largest economies drag on. (Xinhua/Wang Ying)

WASHINGTON, July 26 (Xinhua) -- Several U.S. farm associations on Thursday urged the Trump administration to end trade disputes with its trading partners and restore agricultural markets, as the government unveiled details of a 16-billion-U.S.-dollar trade aid package for farmers who have been hit hard by the U.S.-initiated trade wars.

"It is critically important to restore agricultural markets and mutually beneficial relationships with our trading partners around the world," Duvall said.

Ben Scholz, president of the National Association of Wheat Growers, said his group "appreciates the administration recognizing the impact the current trade war with China is having on farmers," while noting that "this is a band-aid when we really need a long-term fix."

"We continue to urge the administration to quickly resolve the ongoing trade dispute with China and to negotiate new trade agreements, and Congress to act quickly on the USMCA," Scholz said, referring to the U.S.-Mexico-Canada Agreement, which still awaits congressional approval.

U.S. farmers have suffered from retaliatory tariffs that China, the European Union (EU) and other trading partners placed on American agricultural products after Trump slapped tariffs on hundreds of billions of dollars' worth of imports. The new aid package, announced in May, is on top of the 12 billion dollars that the U.S. government offered last year to help farmers weather the fallout.

According to the U.S. Department of Agriculture, payments of the new bailout will be made in up to three tranches, with 50 percent of farmers' aid expected to be paid out at the end of August. Farmers had complained about the slow implementation of the first aid package, among other things.

Last year, payouts to individual farmers were capped at 125,000 dollars, and in the new bailout, the cap has been raised to 250,000 dollars per person or legal entity. For farmers who produce soybeans, vegetables and hogs, the cap is set at 500,000 dollars for the three categories.

David Herring, president of the National Pork Producers Council, thanked the administration for providing "partial relief" for hog farmers as they have "incurred significant losses" due to the trade disputes, stressing that "U.S. pork producers are highly dependent on export markets."

One of the top priorities, Herring said, is "an end to the trade dispute with China, where retaliatory tariffs are preventing U.S. pork from fully capitalizing on a historic sales opportunity created by the outbreak of African swine fever in the world's largest pork-consuming nation."

The average wholesale price of pork in China climbed 29.8 percent year on year to 21.59 yuan (about 3 dollars) per kg in June mainly because of the influence of the African swine fever, China's Ministry of Agriculture and Rural Affairs said last week.

"These are difficult times for agriculture, and the longer these trade wars continue, the deeper the impact on farm country," said Duvall, noting that farmers are being hit with tariffs on top of already-challenging economic conditions from severe weather events, low commodity prices, lack of available labor and a host of other impacts.

Blake Hurst, president of the Missouri Farm Bureau, told Xinhua in a recent interview that several rounds of flooding in the Midwest since late March have significantly delayed planting operations and could lower crop yields this year.

It could take farmers up to three or four years to fully recover, Hurst said, adding that some farms won't be able to recover after "taking such a financial hit."

"We are hopeful that trade negotiations with China will quickly lead to a resolution of trade disputes," Duvall said, while also calling for progress in negotiations with Japan and the EU and congressional approval of the USMCA.

Debbie Stabenow, ranking member of the U.S. Senate Committee on Agriculture, Nutrition, and Forestry, said in a statement that "the administration continues to move ahead with no real trade strategy."

"These short-term, inequitable payouts are not a replacement for markets and a coherent trade strategy," she said, adding that this aid is "not equitable and favors certain farmers over others."