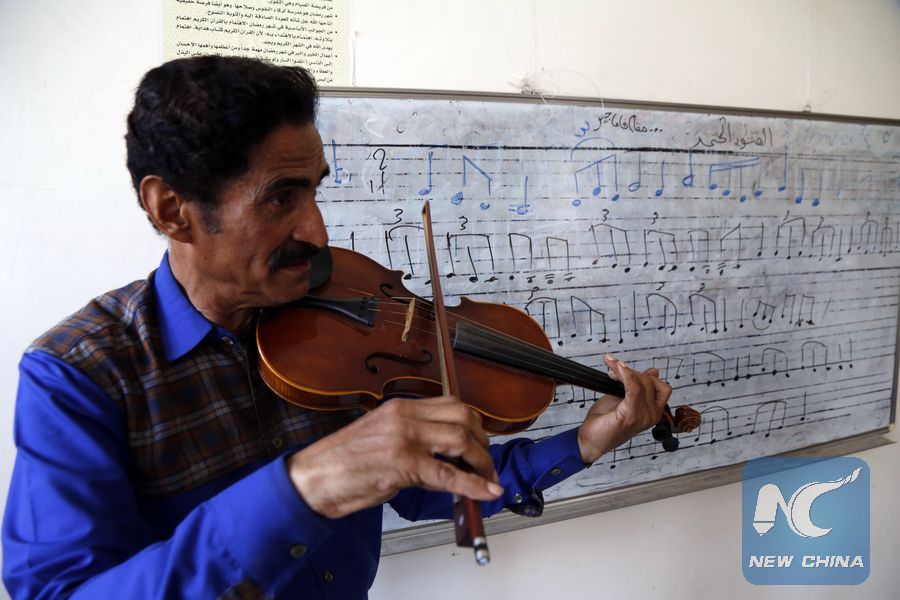 SANAA, July 26 (Xinhua) -- The sound of music is still heard in war-torn Yemen, as a Yemeni musician seeks to achieve his dream of creating a national music group and dozens of young people insist on learning music to get rid of the pain caused by the war.

The Yemeni musician Abdullah Al-Diubai carries on the task of teaching dozens of youngsters to play musical instruments, including oud, guitar, violin and others at the Cultural Center in Sanaa.

He teaches students in the center from Saturday to Wednesday every week for free.

"I am a musician and my dream is to form a band to spread the awareness of music in Yemen," he said.

Al-Diubai was a member of a national band founded in 1975, which was composed of forty members playing various musical instruments, but the band ended because of the war.

He has two Music Degrees, one of which is about oriental music and the other is western music.

Now he teaches young people to play musical instruments according to musical theories that rely on music notes.

"We give them a study of the musical rules of the western music, and also the rules of Arabic music and rhythmic. We offer them printed papers of Arabic and foreign songs," he added.

Among the trainees is a young woman named Ahlam Sabri, who trains on the violin, and believes that music helps young people to get away from psychological stress resulted from the war, violence and destruction.

"I like to learn music because I love it since I was young. And another reason is the situation we are now going through, as I think the music can take us away from the sounds of guns, ordnances and bullets," she said.

Another trainee named Hail al-Zubaidi, who is training on the oud, said "what pushed me to music is my love for it, because it is a message of love and peace".

He said "over the ongoing crisis and war, a person needs to entertain himself and others rather than to hear explosions. And what is better than hearing explosions is to hear music."

Yemen has been mired into a civil war since late 2014, when the Houthis overran much of the country and seized all northern provinces, including Sanaa.

The civil war has killed more than 10,000 people, mostly civilians, displaced 3 million others, and pushed the impoverished Arab country to the brink of famine.