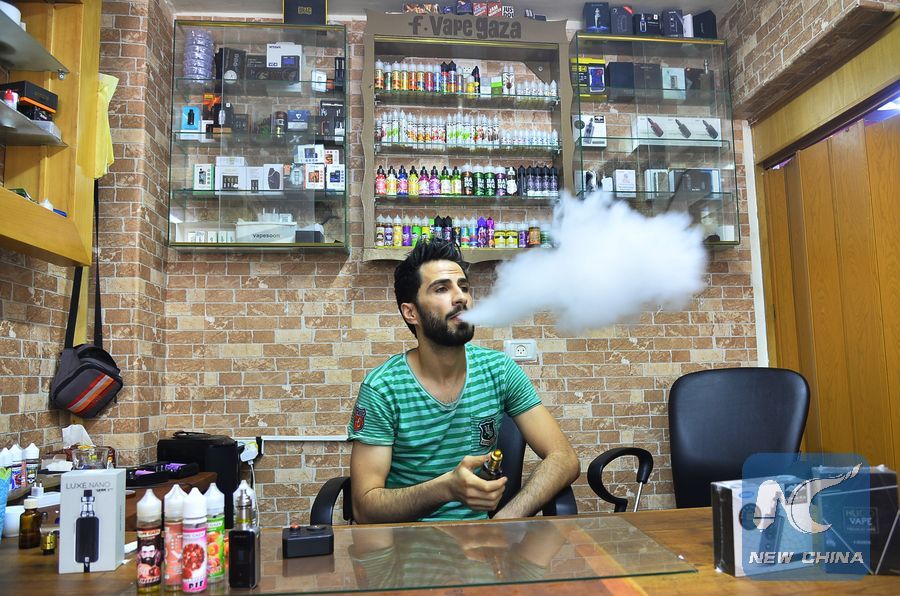 A Palestinian vendor exhales while using Vape device inside his shop, in Gaza City, July 21, 2019. (Xinhua/Stringer)

GAZA, July 26 (Xinhua) -- Kamal Ibrahim, 60, used to smoke various cigarettes, and he did not expect that he would give up his habit, even when he was in hospital to receive treatment due to the negative impact of smoking for his health.

However, he expressed his decision to replace cigarettes with electronic smoking, known as "vape," which has helped him quit smoking cigarettes, almost a month ago.

"It is not easy to quit smoking for an aged man after decades of smoking, especially since blood needs nicotine, which is obtained from cigarettes," Ibrahim told Xinhua.

"I went to the hospital several times because of health problems, and then I decided to replace the cigarette after the failure of all my attempts to quit it. I used the vape as a safe alternative to cigarettes which has the same effect."

Ibrahim used to smoke about 40 cigarettes a day, which was an economic burden on him, especially because he has been unemployed for 20 years.

The range of cigarette price in the Gaza Strip is expensive for Gazans who suffer from extreme poverty and high unemployment.

Israel imposed a tight blockade on the Gaza Strip right after Islamic Hamas movement violently seized the enclave in 2007. Since then, the economy in the Gaza Strip has been deteriorating with a hard living situation for its people.

About 50 percent of the salaries of PA's employees were deducted, which led to the rise of poverty rates.

The unemployment rate has climbed to 52 percent since Israel imposed the blockade, according to the latest report by Palestinian Central Bureau of Statistics.

According to the Palestinian Popular Committee to Confront the Israeli Siege, the per capita daily income of the Gazans is no more than two U.S. dollars, the worst in the world.

The difficult economic situation forced Rushdy Almghani, 33, to buy the vape and use it instead of cigarettes.

"I smoke the vape because it is less expensive than cigarettes, especially in light of the difficult economic situation we are experiencing," Rushdie told Xinhua, noting that vape smokers spend much less.

Dozens of shops are selling vape in the Gaza Strip, with most of them operating illegally, because they are not authorized by the Hamas-run government.

These shops are often crowded with customers who seek to smoke at a lower price than usual, many of them said.

"Gaza Vape" is one of the points of sale in the Gaza City. Ahmed Daher, 30, the owner of the store, said that in the last two years, the vape has spread significantly in the Gaza Strip, because it is not expensive and does no harm to the health of smokers.

Vape and its basic components, including liquid nicotine, are usually introduced illegally into the Gaza Strip, and it is not under the control of the Hamas government in the Gaza Strip.