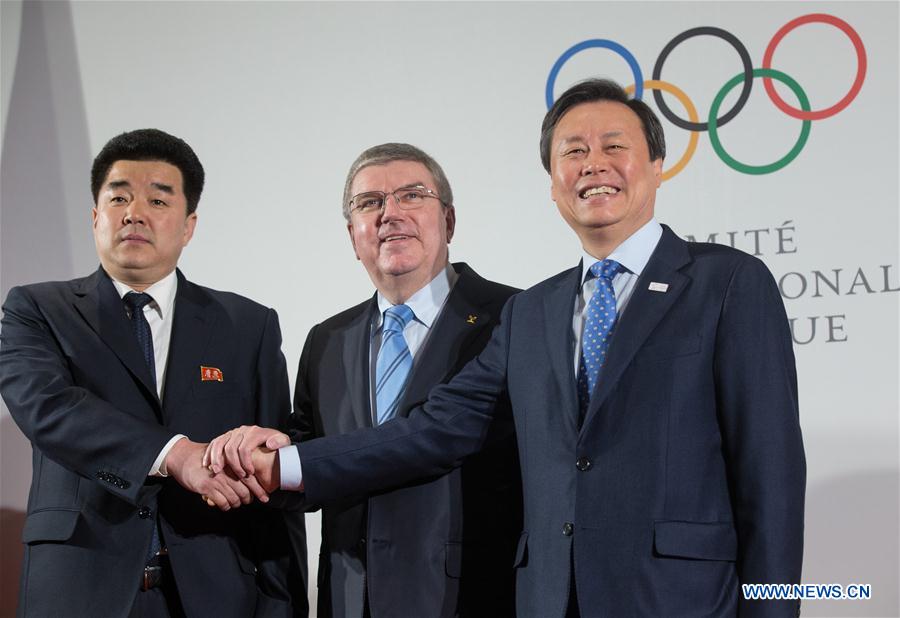 GENEVA, Jan. 20 (Xinhua) -- Delegations from the DPRK and South Korea will march together under the name "Korea" and the Korean Unification Flag at the opening ceremony of the upcoming PyeongChang Olympic Winter Games, the International Olympic Committee (IOC) announced on Saturday.

The announcement came from IOC President Thomas Bach after a four-party meeting at the IOC headquarters in Lausanne, Switzerland, on Saturday that was attended by delegations from the National Olympic Committees (NOC) of the DPRK and South Korea, the organization committee of the PyeongChang Olympic Winter Games, and members of the IOC.

All parties signed the Olympic Korean Peninsula Declaration after the meeting, which finalizes the necessary details of the DPRK's participation in the games.

The IOC will grant accreditations to 22 athletes from the DPRK who will compete in three sports and five disciplines, including figure skating, short track speed skating, cross country skiing, Alpine skiing, and in a united women's hockey team. Accreditations will also be given to 24 officials and 21 media representatives from the DPRK.

The IOC has approved that delegations from the two countries be marching together as one under the name "Korea" at the Opening Ceremony and led into the Olympic Stadium by the Korean Unification Flag, carried by two athletes from the two NOCs respectively. There will be one female and one male athlete flagbearer leading the delegation in a special uniform with the Korean Unification Flag.

In addition, for the first time in the Olympic history of the two countries, a unified women's ice hockey team will be created by adding 12 players and one official from the DPRK to the existing South Korean Olympic squad of 23 players, but it's up to the head coach from South Korea to select the players for each match.

The unified women's ice hockey team will be represented by the Korean Unification Flag and compete as Korea, with the anthem being the song "Arirang". In all other sports, the athletes will compete for their respective NOC in their respective uniforms.

In his speech after Saturday's meeting, IOC President Bach credited the day as a "milestone on a long journey," as the IOC has been addressing the special situation of having the Olympic Winter Games 2018 on the Korean peninsula.

The PyeongChang Games have "opened the door for peaceful dialogue on the Korean peninsula," and shown that "Olympic sport always builds bridges" and "never erects walls," Bach said.