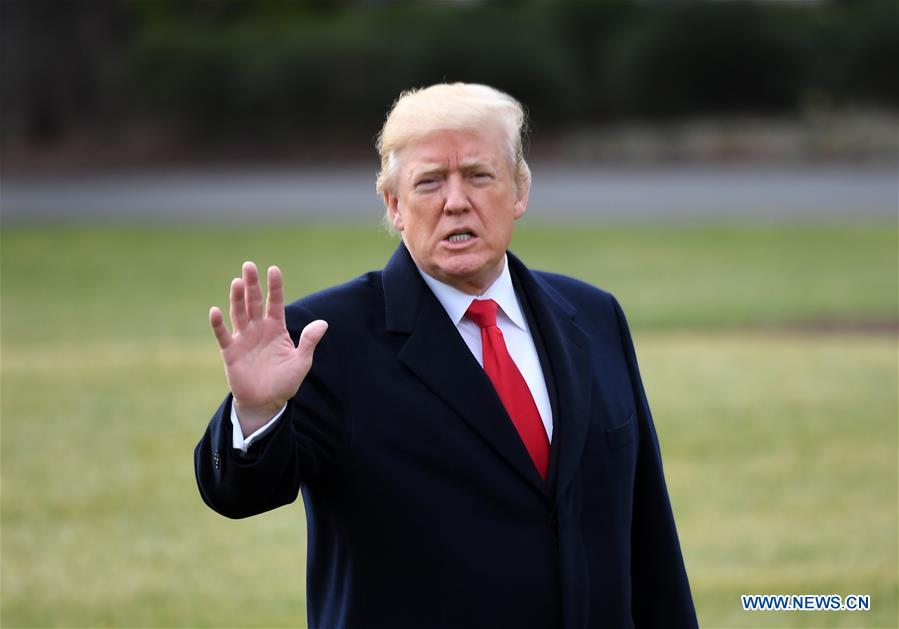 U.S. President Donald Trump waves as he leaves the White House en route to Mar-a-lago Estate in Florida after signing the tax cut bill into law in Washington D.C., the United States, on Dec. 22, 2017. U.S. President Donald Trump on Friday signed a 1.5-trillion-dollar tax cut bill into law, as well as a spending bill to keep the federal government running through January 19, 2018. (Xinhua/Yin Bogu)

WASHINGTON, Dec. 26 (Xinhua) -- At the end of 2017, topping the list of U.S. President Donald Trump's achievements is the tax overhaul that Congress passed just before the year's end, while the biggest failure is his inability to repeal the controversial healthcare laws, experts said.

Trump has dominated the news this year like no other president in American's recent memory. He has grabbed headlines with his bombastic remarks and frequent social media posts, an ongoing scandal over the White House's ties with Russia, among others.

Before wrapping up his first calendar year in office, the president passed a major tax overhaul -- the biggest change in the nation's tax system in three decades. He has claimed on various occasions that his plan, in addition to harnessing economic growth, gives incentives to U.S. corporations to return home.

Supporters say it will not only lift the economy and encourage investment in the United States, but also boost markets and spur companies to create jobs.

The tax bill comes at a time when the United States has one of the world's highest corporate tax rates. Statistics from the Organisation for Economic Co-operation and Development (OECD), a group of advanced economies, show that the top corporate tax rate in the United States, a combination of federal, state and local taxes, was at 39 percent this year -- well above that in other OECD member countries.

"I think the business-side reforms are pro-growth and should boost investment and wages," Aparna Mathur, a resident scholar at the American Enterprise Institute, told Xinhua.

The bill also has political value for Trump, some experts pointed out.

"Trump's tax cut bill will also starve the government of money and make it much more difficult for Democrats to propose new programs," said Darrell West, a senior fellow at Brookings Institution.

However, critics say it's the wealthy who will witness the biggest tax cuts; the middle class will see comparatively fewer benefits.

Others say the cuts will boost growth, investment and wages, but at the same time are concerned that the bill will add to the nation's deficit.

While cutting taxes was Trump's biggest achievement in 2017, he was unable to repeal and replace the healthcare overhaul by his predecessor Barack Obama, known as Obamacare. The law is deeply unpopular with Trump's base, and marks his biggest legislative failure this year.

"Republicans campaigned for years on that issue but did not have the votes to get rid of it. That has been very upsetting to the conservative base and has led to negative press coverage of the president," West said.

The party's inability to replace Obamacare underscored deep divisions internally, Dan Mahaffee, senior vice president and director of policy at the Center for the Study of the Presidency and Congress, told Xinhua.

Indeed, Trump has been embroiled in a major spat with members of his own party this year, in particular with longtime senator and 2008 presidential contender John McCain.

The split widened in September and tensions began to simmer when McCain refused to back Trump's healthcare legislation, which would have repealed and replaced Obamacare.

That caused the legislation to derail, and sent the president into writing a flurry of angry social media posts aimed at McCain. Trump also said in a radio interview that McCain's actions were a "slap in the face" to the GOP.

While Trump has been able to pass the tax bill with relative ease, experts say his next legislative battle -- likely a massive infrastructure bill -- won't be so easy.

It remains unknown whether the president will be able to make good on the myriad promises he made on the campaign trail. While Trump was able to unify the GOP on the tax bill, he will likely have to tread muddy waters in his next legislative battle.

The next legislation will be difficult, Gregory R. Valliere, chief strategist at Horizon Investments, told Xinhua, emphasizing the challenges that lie ahead of the president.

No one can figure out how to pay for infrastructure, there is little support for entitlement reform, and there will be a huge budget fight in January, he said.

To complicate matters, many Republicans may abandon him once they get the tax cuts they want, Valliere added.