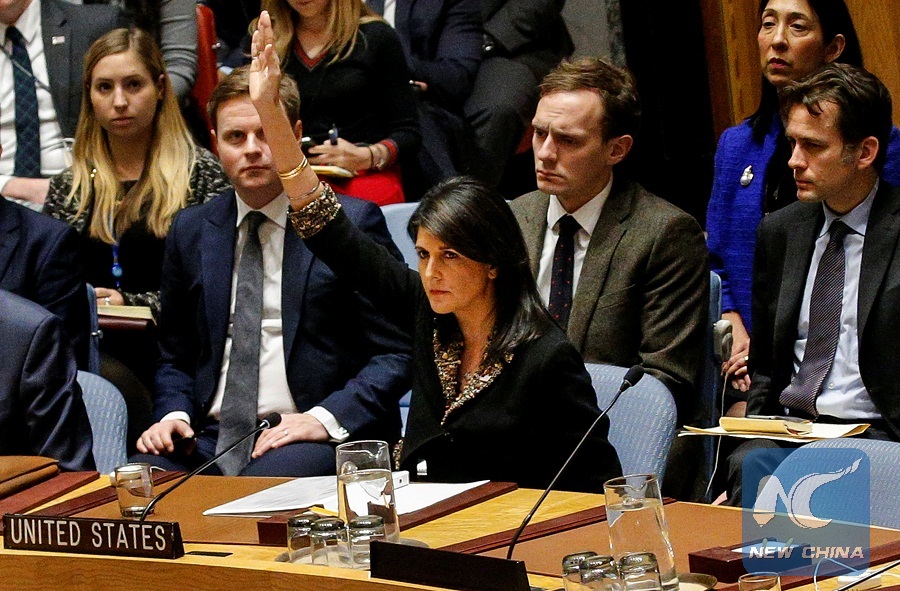 U.S. Ambassador to the United Nations Nikki Haley vetos an Egyptian-drafted resolution regarding recent decisions concerning the status of Jerusalem, during the United Nations Security Council meeting on the situation in the Middle East, including Palestine, at U.N. Headquarters in New York City, New York, U.S., December 18, 2017. (Reuters Photo)

CAIRO, Dec. 20 (Xinhua) -- Egyptian Foreign Ministry on Monday expressed regret at the UN Security Council's failure to pass the Egypt-drafted resolution on Jerusalem due to the U.S. veto.

Trump, breaking away from decades-old U.S. policy of neutrality on the issue, announced on Dec. 6 to recognize Jerusalem as Israel's capital and ordered to move the U.S. embassy to the disputed holy city.

This has infuriated the Palestinians and Arab countries, which have strongly protested against the U.S. move. The Palestinians want East Jerusalem, now occupied by Israel, as the capital of their future independent state.

Egypt filed a draft resolution to the UN Security Council urging the U.S. to rescind Trump's declaration of Jerusalem as the capital of Israel.

The U.S. on Monday vetoed the resolution, which was approved by 14 other members of the council, in reflection of the depth of global opposition to Trump's action, Zeid said.

He added that the Arab group in the UN will convene later to assess the situation and determine the next step in order to defend the status of Jerusalem.