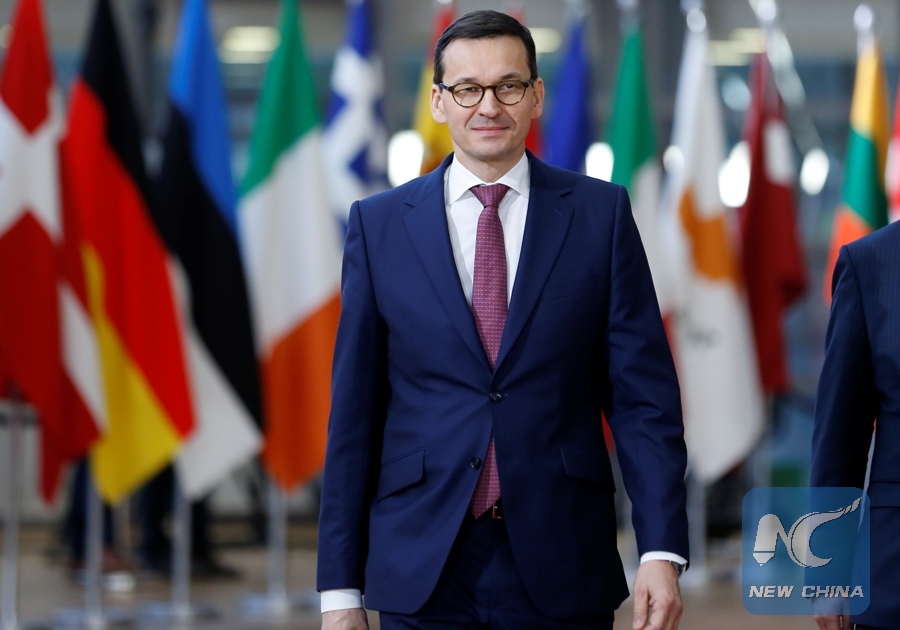 WARSAW, Dec. 20 (Xinhua) -- Poland on Wednesday regretted the European Commission decision to launch Article 7, saying the Commission's decision is "essentially political, not legal in its nature", Poland's Foreign Ministry said in a statement.

"We are always ready for talks. During the last European summit, Prime Minister Mateusz Morawiecki confirmed our will to continue the dialogue at the highest level with the Commission, which was positively welcomed by the other side," it said.

"We hope that soon we will be able to present our position in a direct and open manner," it said.

Morawiecki, who became new prime minister earlier this month, said Poland is attached to the rule of law principle as the EU is, according to Polish Press Agency.

Morawiecki said the judicial reforms were necessary, and suggested that dialogue between Warsaw and the European Commission needed "openness and honesty".

He added that he believed Poland's independence could be reconciled with the united Europe concept.

The European Commission said earlier on Wednesday in a statement that it has triggered Article 7 and launched an unprecedented censure against Poland over a judicial reform dispute.

"There is a clear risk of a serious breach of the rule of law in Poland," it said.

Over a period of two years, the Polish authorities have adopted more than 13 laws affecting the entire structure of the justice system in Poland, according to the Commission statement.

"The European Commission is taking action to protect the rule of law in Europe. Judicial reforms in Poland mean that the country's judiciary is now under the political control of the ruling majority," it said.

The Commission has given Warsaw three months to introduce its latest rule of law recommendations, the fourth set it has issued with regard to Poland so far.

The Commission is now requesting the European Council and the European Parliament to analyze the situation in Poland and decide whether there is a clear risk to the rule of law, Commission vice president Frans Timmermans told reporters.

Dubbed so-called "nuclear option", Article 7 has never been triggered against any EU member state before. The procedure could eventually lead to Poland losing its voting rights in the 28-member bloc.

Under Article 7, the European Council, or heads of national governments, may declare that there is a risk of a serious breach of European values by a member state.

Such a declaration requires a four-fifths majority and may subsequently involve sanctions against the member state in question. Among other consequences, the country could be stripped of its vote in the European Council.

The judicial reforms have caused many controversies among Polish citizens and among foreign institutions as well. The reforms include changes in the electoral system of the members of National Council of the Judiciary and Supreme Court judges' retirement.