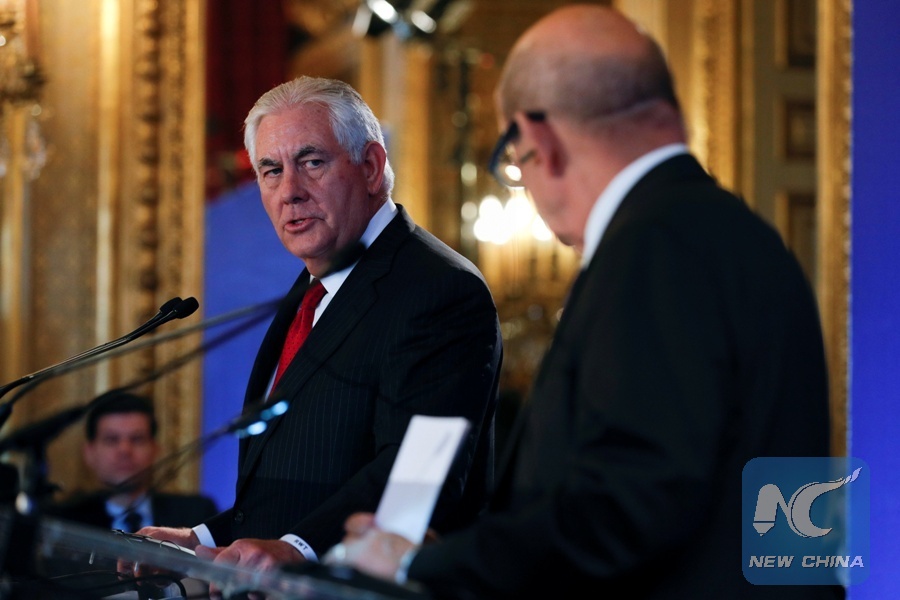 WASHINGTON, Dec. 10 (Xinhua) -- U.S. Secretary of State Rex Tillerson on Friday wrapped up a five-day three-nation Europe visit which, experts said, was unlikely to heal the expanding trans-Atlantic rifts on the relevant regional and global issues.

The absence of any summary of the tour, which took him to Brussels, Vienna and Paris, and which is the 7th of its kind since Tillerson took office in February, also indicated the fruitlessness of the visit, said experts.

The tour, which aims to ease the rising tensions between Washington and Brussels, had been overshadowed before it even started on Monday by rumors of Trump's possible Jerusalem-related decision later.

After Trump made the highly controversial announcement on Wednesday in which he recognizes Jerusalem as the Israeli capital and orders the U.S. embassy in Israel to move from Tel Aviv to Jerusalem, Tillerson has spent most of his remaining tour peddling Trump's justification to upset European allies.

Bilateral grudges were also detonated by Trump's retweeting of anti-Muslim posts, as British Prime Minister Theresa May, among European leaders, said Trump's posts were "wrong", and Trump later snapped by suggesting May to focus on her country's own security.

Brussels, already upset about Trump's explicit support of Brexit, has made the bilateral rifts public in the face of Tillerson.

In a joint statement to the media with her U.S. counterpart, the European Union (EU) High Foreign Policy Chief Federica Mogherini noted that the bloc believes any action that would undermine the peace-making efforts between Palestine and Israel "must absolutely be avoided."

"Now dismantling an agreement on nuclear issues that is working ... would not put us in a better position to discuss all the rest on the country," she said, referring to Trump's October decertification of the landmark deal that helps ease the nuclear tension in the Middle East and beyond.

The divergence on values was evident, as Mogherini said Brussels "is and remains a strong and reliable supporter of multilateralism, U.N. system, and a rules-based global order," with barely no mentioning of the U.S. concerns on Ukraine and the Democratic People's Republic of Korea.

Darrell West of Brookings Institution told Xinhua that the Europeans are "cross-pressured" as Trump's abrupt moves and rhetoric made it difficult to "get touch on Russia," which Brussels took as one of its most imminent threats.

"Trump has made the relationship worse with his embrace of ultra-nationalism and rude behavior towards U.S. allies. If that continues, it will cause the U.S. and EU to drift further apart," he added.

Some European leaders have showed "consternation" about Trump's tweets, "but for others, they have found a kindred populist and nationalist in the White House," said Dan Mahaffee, vice president and director of policy at the U.S. Center for the Study of Congress and the Presidency.

"Many look to comments from other administration officials to confirm the U.S. commitment to NATO and willingness to confront Russia ... The perception of disunity and the focus of both the U.S. and EU on internal politics are not the best signal to be sending on a tumultuous global stage," he said.

Analysts said that under the multiple trans-Atlantic rifts on the Middle East peace process, the Paris climate accord, and the Iran nuclear deal, was lying Brussels' profound lacking of confidence in bilateral cooperation amid the mounting uncertainties of Trump's foreign policy.

In a Nov. 28 speech that outlined Trump administration's recent Europe policy, Tillerson, on the one hand, said the Article 5 of the NATO treaty "is the best mechanism" the Washington and Brussels have "to deter aggression" of Moscow, and on the other, urged European nations to increase their defense spending that accounts for two percent of their GDP.

Washington's underlining of NATO, according to Cui Hongjian, director of European Studies at the China Institute of International Studies, lies in the wish to reinforce the U.S. role in protecting Europe and rein in the European military buildup under the U.S.-led NATO mechanism.

However, Tillerson's calculations are highly likely doomed as Brussels was unwilling to positively commit itself to the U.S. regional and global agendas, deeply concerned about the leverage of the U.S. domestic issues on its foreign policy, the lacking of shared values between the two sides of the Atlantic and Tillerson's possible stepdown in the near future, said experts.

"European leaders yearn for stability in U.S. foreign policy. They are troubled by Trump's 'America first' rhetoric and inconsistent statements on NATO and the European Union," the Reuters noted.

Russia-phobia has featured Tillerson's seventh Europe trip, as he warned all European nations of Moscow's "intrusion" in NATO foreign ministerial meeting and the Organization for Security and Cooperation in Europe (OSCE) plenaries.

"Russia's aggression in Ukraine remains the biggest threat to European security," Tillerson said, accusing "Russia and its proxies" of "harassment, intimidation, and its attacks on the OSCE Special Monitoring Mission."

"Trump does not talk with President Putin as often as with other world leaders, and I think, again, that's simply a reflection of the strained relationship that exists between the United States and Russia," he noted.

"We join our European partners in maintaining sanctions until Russia withdraws its forces from the Donbass and meets its Minsk commitments," Tillerson added.

He further noted that to regularize or renormalize the West's relationship with Russia cannot be undertaken "until Russia begins to address those actions which we find not just unacceptable but intolerable."

Analysts said Tillerson's underlining of the Ukraine issues aims to elaborate the U.S. engagement in the EU's security maintenance, for which it was accused of not having taken enough resources to respond.

As for the U.S.-Russia relations under the Trump administration, Brussels' attitude has long been featured by ambivalence.

For fear of being betrayed by Trump, it does not expect Washington-Moscow rapprochement to come too soon with the Ukraine issues remaining unsolved. Meanwhile, sandwiched between the two nuclear powers, Europe does not welcome the radical breakup of Washington and Moscow neither, said experts.

It would be unrealistic to anticipate dramatic improvement of trans-Atlantic relations under the current circumstance, and Tillerson's visit could be capped as a success as long as he could keep the bilateral relationship from becoming worse, experts argued.

However, EU's Federica Mogherini said on the day when Tillerson left Europe that Trump's decision on Jerusalem would be a "gift" to extremists and to those not interested in peace, in a gesture that was widely taken as a slap in the face of Tillerson and the Trump administration at large.

Trump's decision "has a very worrying potential impact in this very fragile context," she said. "Now what the worst possible development could be that a bad situation turns into a worse one and that tensions inflame the region even further."