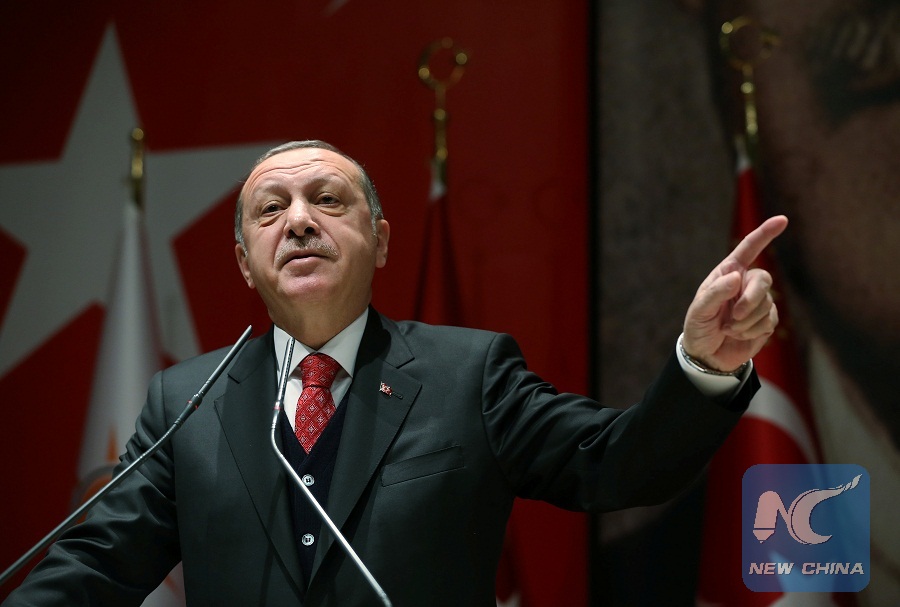 "Declaring it (Jerusalem) as a capital and relocating the (U.S.) embassy has no validity for us," Erdogan told a meeting of the ruling Justice and Development Party in the central Anatolia city of Sivas.

The Turkish leader has been one of the most outspoken critics of U.S. President Donald Trump's decision on Wednesday to recognize Jerusalem as Israeli capital and to start immediately the process of moving the U.S. embassy from Tel Aviv to Jerusalem.

Israel took over East Jerusalem, revered by Muslims as the third holiest site in Islam, in the 1967 war, and declared unilaterally the whole city as its eternal capital. But this has never been accepted by the international community, which has called for reaching a final settlement of the dispute through the Israeli-Palestinian peace talks.

Erdogan has called for holding an extraordinary summit of the Organization of Islamic Cooperation on Wednesday in Istanbul, which he hopes to draw up a roadmap for Muslim nations to follow as they oppose the U.S. decision.

In addition, he condemned the Israeli police for using "disproportionate" force against Palestinian protesters in the past days.

Two Palestinians have been killed by Israeli forces during clashes over the weekend after Trump's announcement that infuriated the Palestinians and Muslims across the world.