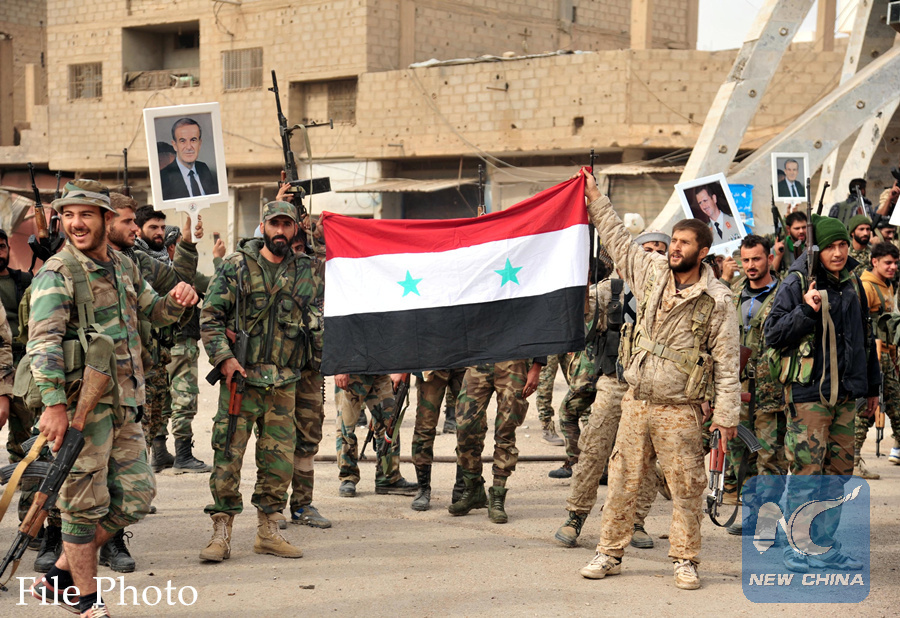 Syrian government soldiers celebrate victory against the Islamic State (IS) in the eastern city of al-Bukamal in Syria, Nov. 20, 2017. (Xinhua/Ammar Safarjalani)

MOSCOW, Dec. 10 (Xinhua) -- The defeat of the Islamic States (IS) terrorist group in Syria is mainly due to the Syrian government, the Russian Defense Ministry said Sunday.

It made the remarks in a comment on the earlier statement of the French Foreign Minister Jean-Yves Le Drian about Russia's taking credit for the victory over IS.

"At the least, it is strange to hear from the French Foreign Minister that Russia has allegedly arrogated the victory over IS to itself. The credit for the fact that IS is now defeated in Syria belongs primarily to the Syrian leadership and the government troops," the defense ministry said in a statement.

With the support of the Russian Air Force, the Syrian army has freed hundreds of settlements from IS terrorists and returned the control of practically the entire territory of the country to the legitimate leadership, it said.

Meanwhile, the ministry noted that the international coalition led by the United States was focused on countering the Syrian government troops particularly in the province of Deir-ez-Zor in eastern Syria.

"In the three years of its existence, the coalition only recently achieved its first 'result' in the fight against IS terrorists in Syria-the destruction of al-Raqqah (in northern Syria) along with civilians by massive bombing," the statement read.

The coalition also allowed core IS militants to leave the city freely and join other IS terrorists near Deir-ez-Zor, which was confirmed by the British public service broadcaster BBC, it added.

The Russian military announced Thursday that Syrian troops supported by Russian servicemen have completed the destruction of IS terrorists in the war-torn country.