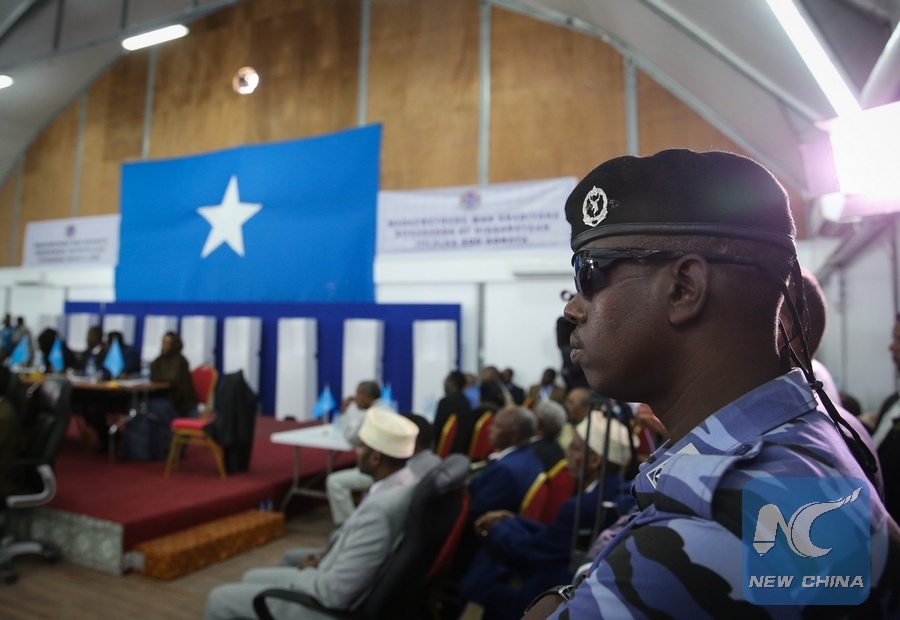 File photo shows a policeman guards at the site where members of the federal parliament cast their votes in Mogadishu, Somalia, on Feb. 8, 2017. (Xinhua/Pan Siwei)

MOGADISHU, Dec. 5 (Xinhua) -- Somalia has registered the first political parties since the country fell into a military dictatorship in the 1960s, marking a major shift from the clan-based politics that had dominated the country's political life since the onset of the transitional governments in 2000.

The country's electoral body, National Independent Electoral Commission (NIEC) on Sunday awarded certificates of registration to the first seven political parties, noting it was the start of transition into multi-party politics, local media has reported .

"We have to come up with political parties that will compete in the elections that will take place in the country in order to move away from the system of 4.5 to one person one vote," NIEC chair Halima Ismail Ibrahim said.

"We have succeeded in this process and today we temporarily registered seven political parties," Ibrahim said.

The political parties, one of them headed by former foreign affairs minister and Deputy Prime Minister Fawzia Yusuf, are the first such political institutions to be formally registered in the country in more than 50 years after Siad Barre overturned the civilian constitution in 1969.

A number of parties have been in existence but not formally registered in line with the country's new electoral and political party laws.

"Political parties, whether ruling or opposition are the pillars of our politics and democratic culture of our country," said Jawari.

The Horn of Africa nation is preparing for one person one vote in 2020 and formation of political parties is one of the stages in preparation for the exercise.