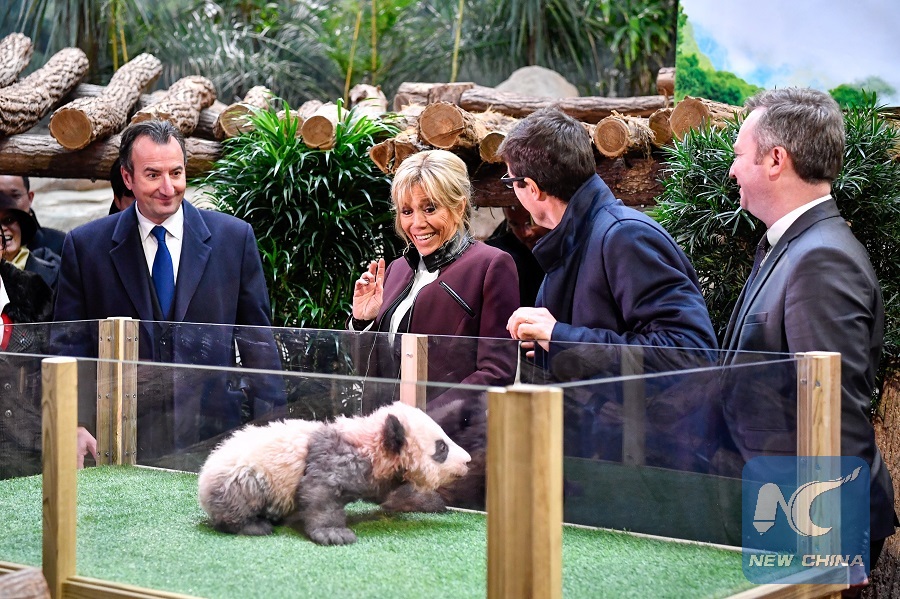 PARIS, Dec. 5 (Xinhua) -- Brigitte Macron, wife of French President Emmanuel Macron, revealed the name of the panda baby, the first-ever cub born in the country, at a naming ceremony at a zoo in central France on Monday.

Joined by Chinese officials, Brigitte Macron, who is also the new panda's godmother, announced that the four-month-old cub's name was Yuan Meng.

Born on Aug. 4, the baby panda had been called as "Mini Yuan Zi," referring to his father Yuan Zi, who arrived with his female partner Huan Huan in central France's Beauval zoo in January 2012.

"Yuan Meng is the energetic and vigorous fruit of the Franco-Chinese friendship," said Macron.

"Yuan Meng and his parents are the illustration of a dialogue that has always been fruitful between our two countries who, for centuries, have got along and understood each other," she added.

The panda baby who will return home at the age of three, can be seen by visitors to the zoo as of Jan. 13.

On Aug. 4, Huan Huan gave birth to twin cubs, the first panda babies born in France. She took care of the first cub immediately after its birth, but abandoned the first after the second cub was born, a common practice among pandas.

In the wild, female pandas raise only one cub, the "strongest", the one that has the most chances of survival.

There are about 2,000 pandas in the world. They are classified as a vulnerable species by the International Union for Conservation of Nature (IUCN).