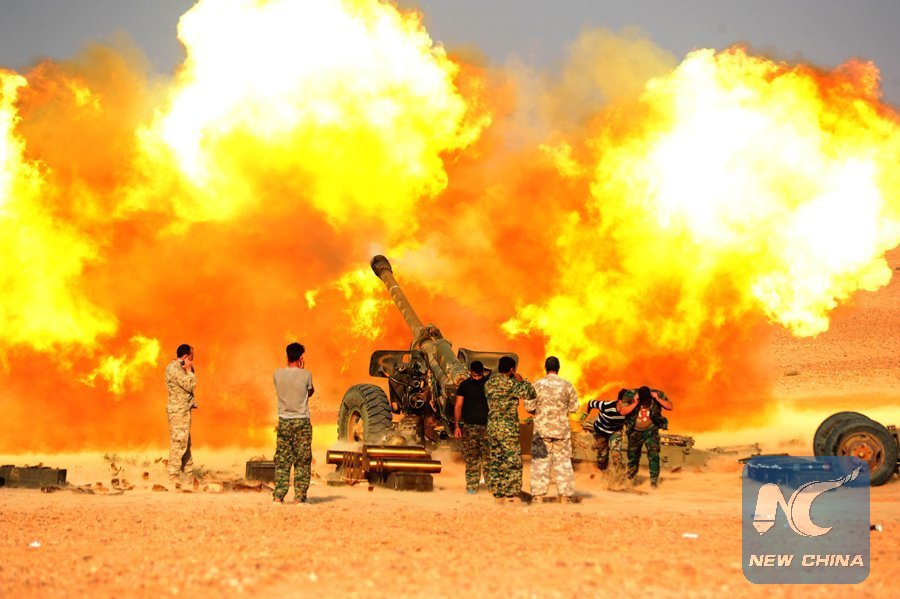 File Photo: Syrian army soldiers fire an artillery on the Islamic State (IS) positions near the city of al-Bukamal in the eastern countryside of Deir al-Zour province, Syria, on Nov. 10, 2017. (Xinhua/Ammar Safarjalani)

UNITED NATIONS, Nov. 27 (Xinhua) -- UN Special Envoy for Syria Staffan de Mistura said Monday that he believed that the "moment of truth" had arrived for the Syria talks.

He made the remarks while briefing the UN Security Council by videolink about the preparations for the round of talks on Syria that are to begin in Geneva, Switzerland on Tuesday.

The talks should begin in Geneva without preconditions, said the envoy.

Initially, he said, the participants should focus on a work plan, on principles as well as the constitutional and election "baskets" towards the implementation of Security Council resolution 2254.

He added that all other initiatives should support the UN mediation process, which the Security Council has mandated the United Nations to conduct, and no one else.

As Da'esh, or the Islamic State, is being defeated, he said, neither side should turn to violence in the de-escalation zones, and he expressed concern about the latest violence in eastern Ghouta.

Regarding the situation in eastern Ghouta, the UN Office for the Coordination of Humanitarian Affairs (OCHA) said that a UN/Syrian Arab Red Crescent inter-agency convoy was not able to enter Nashabieh in eastern Ghouta on Monday due to fighting in the area.

The convoy contained food, health and nutrition items for 7,200 people in need.

While guarantees of safe passage had been granted before the humanitarian convoy moved, it was forced to turn back following shelling and explosions in the area.

The United Nations is to resume the peace talks between the government and the Syrian opposition in Geneva on Tuesday.

The opposition's delegation arrived Monday, after publishing a communique last week that said it was ready for talks "without preconditions."