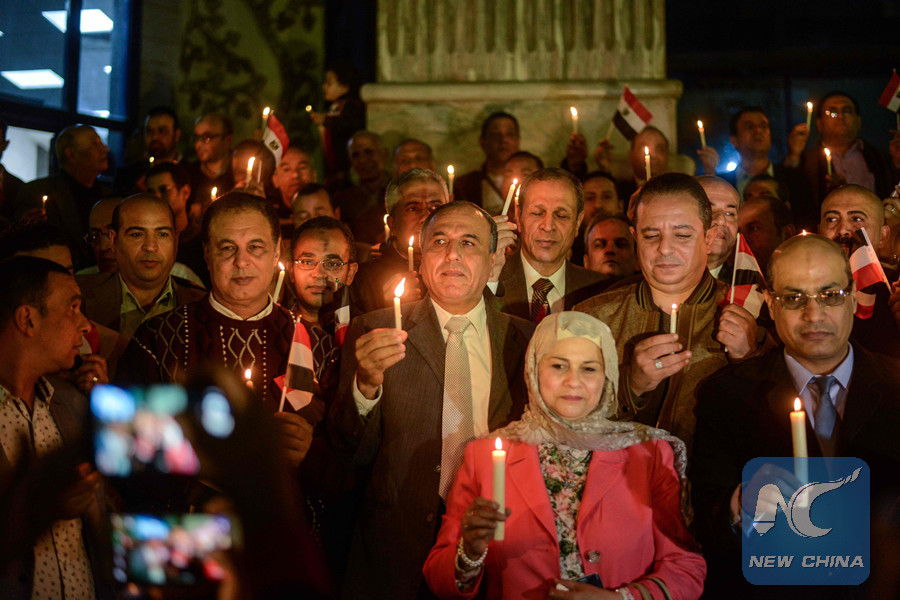 Abdel Mohsen Salama (C), chief of the Egyptian Syndicate of Journalists, speaks to the media as he holds a candle amongst others at a vigil outside syndicate headquarters in the capital Cairo's downtown district on November 27, 2017, in the memory of the victims of a bomb and gun assault that left over 300 worshippers killed in the restive province of North Sinai on November 24. (AFP PHOTO)

CAIRO, Nov. 27 (Xinhua) -- Dozens of Egyptian journalists held on Monday a candlelight vigil in front of the Syndicate of Journalists in Cairo in memory of the victims of the Friday terror attack that left 305 in country's North Sinai province.

The participants expressed their deep condolences to the victims' families and all those affected by the terrorist attack, wishing speedy recovery to the injured.

"This is the least we could do for the victims and their families. We also want to convey a message that terrorism has nothing to do religions," Hanem al-Kerdassy, a researcher, told Xinhua. 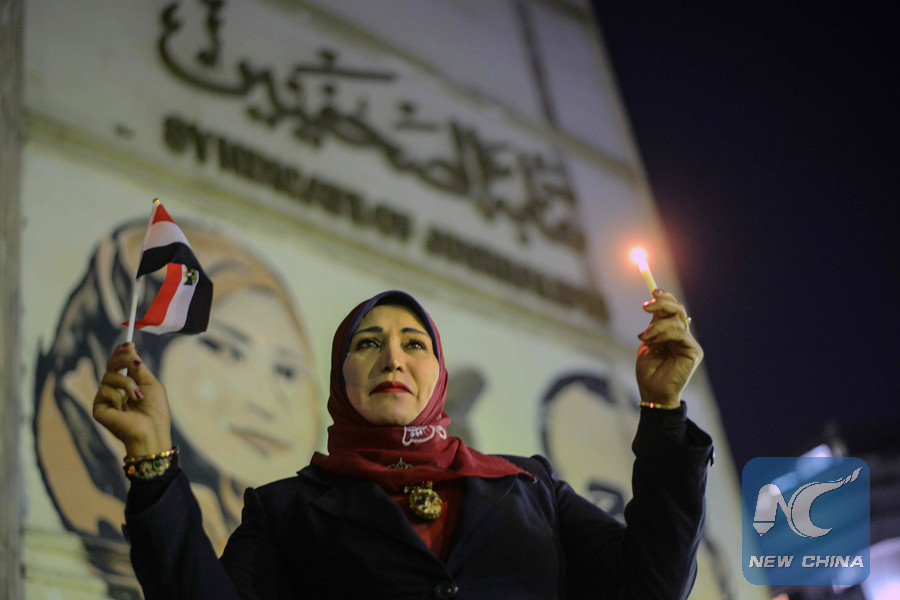 Egyptians hold candles at a vigil outside the Syndicate of Journalists in the capital Cairo's downtown district on November 27, 2017, in the memory of the victims of a bomb and gun assault that left over 300 worshippers killed in the restive province of North Sinai on November 24. (AFP PHOTO)

On Friday, a group of terrorists killed 305 people, including 27 children, and injured 128 others while performing noon prayers in a mosque in North Sinai's al-Rawda village.

The attack took place after the mosque's preacher started his sermons speech, when terrorists threw bombs from the windows and doors of the mosque, besieging the worshippers inside.

No group has claimed responsibility for the bloodbath. 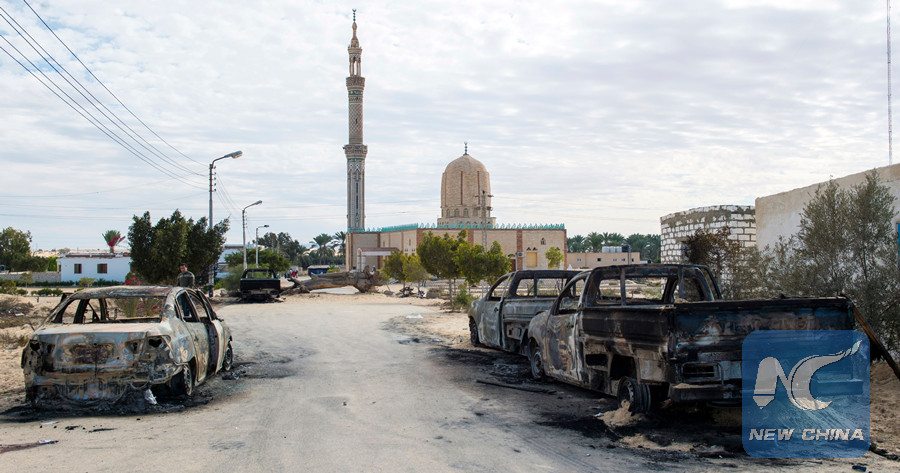 A picture taken on November 25, 2017, shows the Rawda mosque, roughly 40 kilometres west of the North Sinai capital of El-Arish, after a gun and bombing attack. (AFP PHOTO)

However, fingers are pointed at a Sinai-based group loyal to the Islamic State which has claimed most major terrorist operations in Egypt over the past few years and whose affiliates are currently facing a massive security crackdown in Syria and Iraq.

"This is ugliest terror crime in the modern history of Egypt...killing unarmed worshippers can never be justified," Yasser Selim, an Egyptian journalist said.

He said the Egyptian journalists send a message today to the whole world that the war on terror in Egypt is ongoing, urging the international community to support Egypt's war on terror.

"The Egyptians are united in face of terrorism...we are not afraid of terror," he stressed.

On Saturday, the Egyptian military said air force jets hit a number of vehicles loaded with terrorists involved in the deadly attack.

In addition, the air forces targeted a number of hideouts containing weapons and ammunition that belong to the extremists.

The airstrikes came hours after Egyptian President Abdel-Fattah al-Sisi vowed to respond fiercely against terrorists who carried out the attack.

It is the first time a mosque was targeted by militants in Egypt.

The North Sinai province, a mostly desert area bordering Israel and the Palestinian Gaza Strip, has been experiencing waves of anti-security attacks that have killed hundreds of police and soldiers since an army-led ouster of Islamist President Mohamed Morsi in 2013.