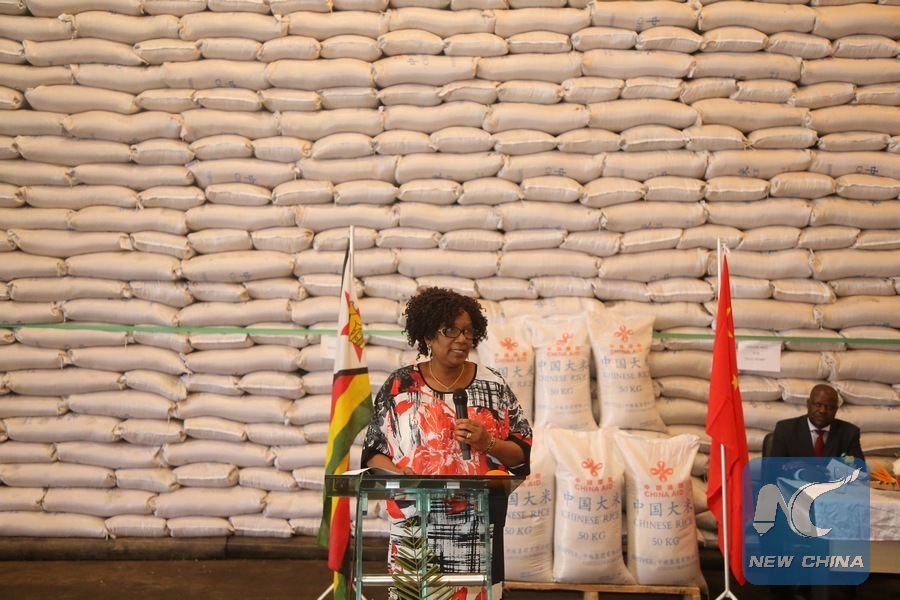 Zimbabwean Minister of Public Service, Labor and Social Welfare Prisca Mupfumira (Front) addresses a rice handover ceremony in Harare, Zimbabwe, on Sept. 11, 2017. China on Monday handed over 12,500 metric tons of rice to assist Zimbabweans who are in need of food aid due to flood-induced hunger. (Xinhua/Stringer)

HARARE, Nov. 27 (Xinhua) -- "I love China and their people. They are absolutely brilliant," Paul Mattison, a farmer in Nyabira just outside Zimbabwe's capital city Harare said.

Mattison has been growing tobacco under contract farming with Chinese tobacco company Tianze for 10 years. "They have funded all the capital projects on my farm, making sure I remain in this challenging business," he said.

In the agriculture sector, the backbone of Zimbabwe's economy, China is offering tremendous support to boost the production of tobacco leaf, Zimbabwe's top foreign currency earner.

Through its support, Zimbabwe's tobacco output which had plummeted to a low of 48 million kg in 2008, has rebounded and reached 217 million kg in 2014, slightly short of peak production in 2001 of 231 million kg.

Every year, the company buys and exports more than 50 percent of Zimbabwe's tobacco leaf to China. And since 2005, the company has injected 40 million U.S. dollars annually in interest free loans towards tobacco production in Zimbabwe. 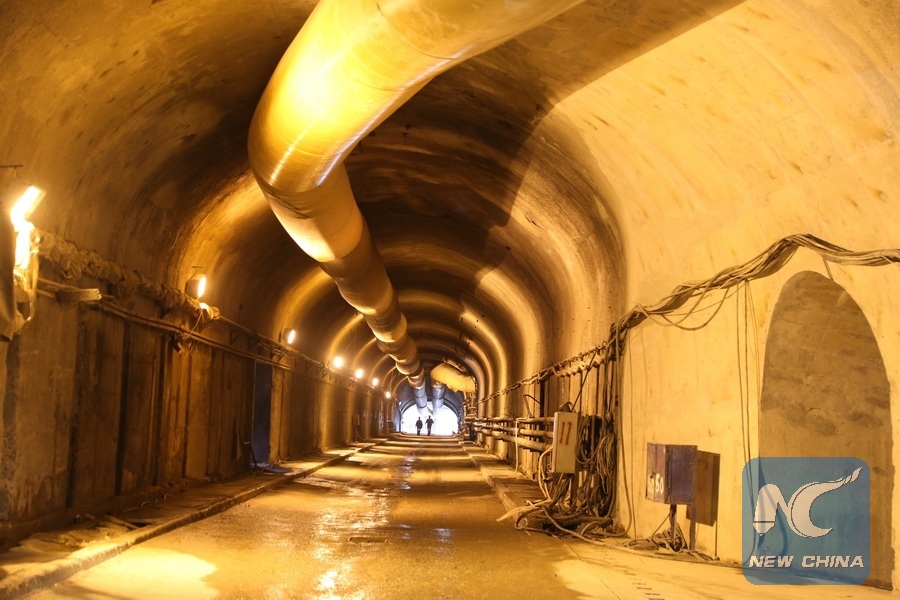 The construction site of Kariba South Expansion Project is seen in the northern part of Zimbabwe along the border with Zambia, on June 3, 2017. Work on Kariba South Expansion Project by Sinohydro, China's power engineering and construction heavyweight, is now 85 percent complete and the first unit is expected to come on stream in December 2017 while the second one will be commissioned in the first quarter of 2018. (Xinhua/Chen Yaqin)

But what has been more striking about China's support to Zimbabwe in recent years has been its emphasis on people-centered aid that directly benefits the disadvantaged rural people of Zimbabwe.

One such project that has the potential to alleviate hunger and build sustainable and resilient communities is the half-a-million dollars weir, nutrition garden and orchard project that was handed over to the Shauke community in Zvishavane District by the Chinese government in August this year.

Funded by China, the project is being spearheaded by the WFP in partnership with its implementing local agency, the Adventist Development and Relief Agency Zimbabwe.

According to the WFP, the Shauke project will support improved crop and livestock production and water access by the community in the semi-arid Zvishavane district, about 344 km south of the capital Harare.

The project comprises of a 39,000 cubic meter dam, 1.3 ha nutrition garden and orchard. The dam's construction started in June and is set for completion in December. 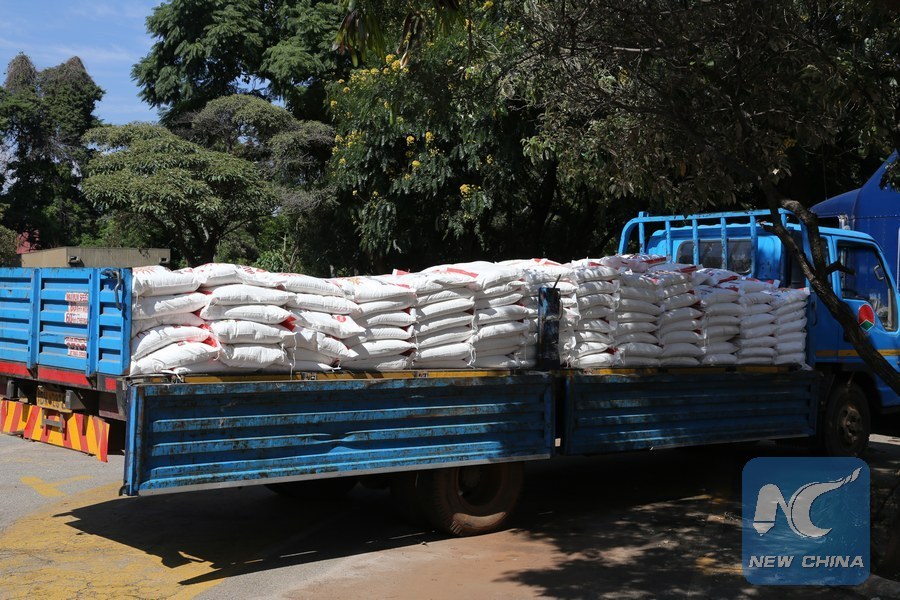 A truck prepares to transfer food to the flood-affected regions of Zimbabwe in Harare, capital of Zimbabwe, on April 20, 2017. The Chinese Embassy in Zimbabwe on Thursday handed over 60,000 U.S. dollars worth of basic food to assist hundreds of local families affected by floods that hit the southern parts of the country in February. (Xinhua/Zhang Yuliang)

China's support towards improving the livelihoods of poor, rural communities in Zimbabwe by providing them with easy access to water is one viable way of fighting hunger and poverty in Zimbabwe.

In 2016, Zimbabwe was hit by its worst drought in 30 years, which left a quarter of the rural population in need of food aid. The El-Nino induced drought devastated harvests, killed thousands of cattle and caused several dams to dry up.

There was a critical shortage of water for people in both urban and rural areas, with the rural population and small provincial towns being the hardest hit after dams supplying them with water dried up.

In light of this, Chinese firm China Jiangxi International Corporation (CJIC) swiftly responded to the dire situation and intensified borehole drilling in some of the affected areas.

One such area which benefited is Rushinga District north of Harare, one of the driest areas in Zimbabwe.

CJIC drilled in total 12 boreholes in the district in 2016, bringing huge relief to residents of Rushinga Business center and other villagers in the district who were watching helplessly as their cattle succumbed to drought. 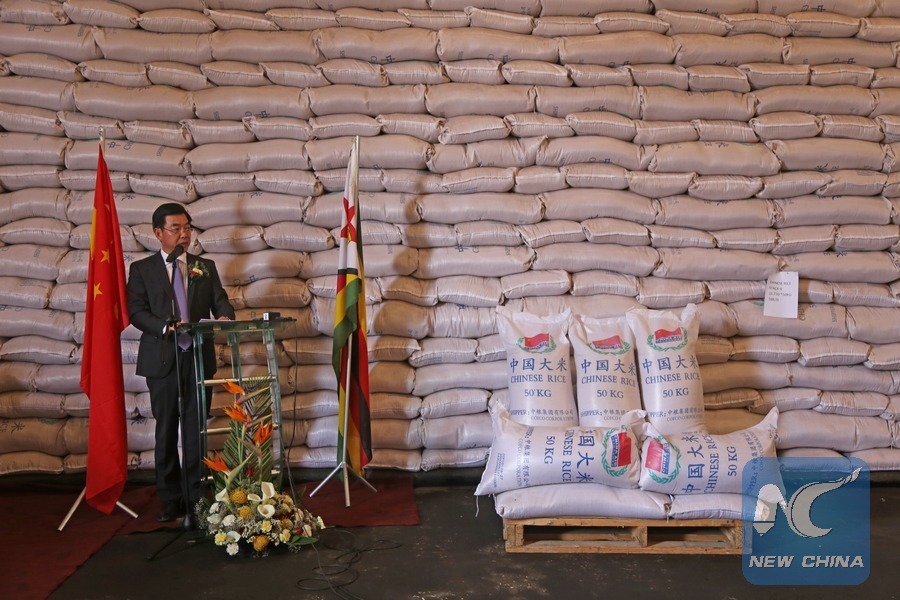 Chinese Ambassador to Zimbabwe Huang Ping speaks during a ceremony to receive rice donated by China in Harare, capital of Zimbabwe, on Sept. 15, 2016. Zimbabwe on Thursday received rice from China to help alleviate hunger after a drought that has left up to 4 million Zimbabweans in need of food aid. (Xinhua/Zhang Yuliang)

This was after the firm had been contracted by the Chinese government to drill 300 boreholes in Zimbabwe after the two governments signed a five-year cooperation agreement. Provided by China free of charge, the borehole project was implemented in three phases from 2012 to 2017.

Rushinga district administrator Hebert Mandizvidza thanked the Chinese government for the assistance, saying the boreholes would alleviate water shortages and help improve access to clean water by people in the district.

"This is so superb, so beautiful," Mandizvidza said as water started gushing out at a borehole site that had just been completed by the Chinese firm.

"As you can see, villagers are quite happy because they will have easy access to clean water for them and their livestock," he said.

Young boys watching the gushing water were all smiles and said they will now be spared the agony of travelling long distances looking for water for their cattle.