Spotlight: Divided since 1974, will Cyprus be reunified? 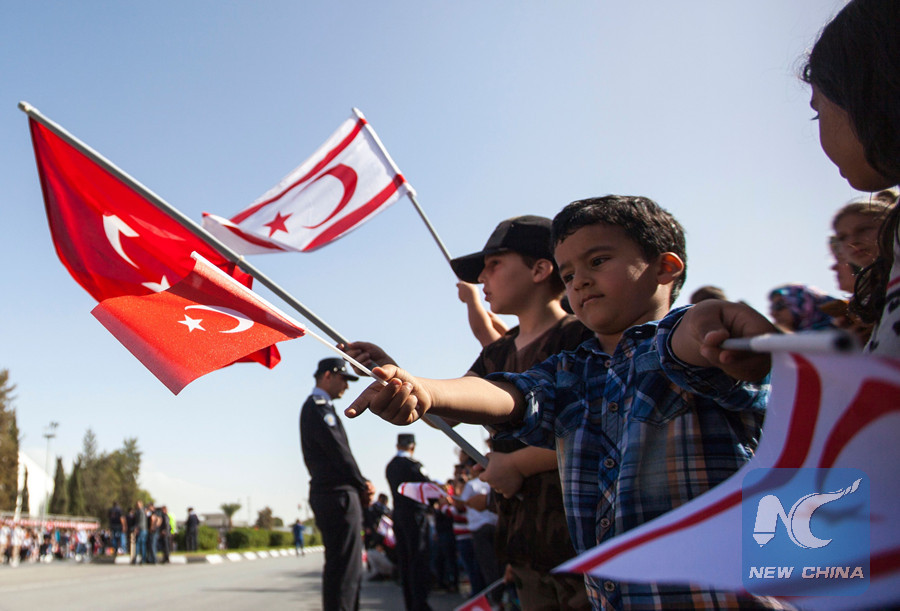 Children wave Turkish-Cypriot flags during a military parade in Nicosia marking the anniversary of the creation of the self-proclaimed Turkish Republic of Northern Cyprus (TRNC) on Nov. 15, 2017.
The TRNC was established in 1983 by the Turkish Cypriot community. An independent state is, however, recognized only by Turkey. (AFP photo)

ANKARA, Nov. 16 (Xinhua) -- The Mediterranean island of Cyprus has been divided in two entities since 1974. The latest reunification talks between Turkish and Greek Cypriots failed in July, but there is still hope in a foreseeable future to revive them despite seething frustration among the population there, said experts.

The chance of reaching a deal was high back in late June in a Swiss resort when Nicos Anastasiades, Cyprus's president, and Mustafa Akinci, his Turkish-Cypriot counterpart, were both determined to reunite the island.

But on July 7, negotiations collapsed and UN Secretary General Antonio Guterres announced that the conference had ended "without the possibility to bring a solution to this dramatic and long-lasting problem."

The main hurdles were power-sharing arrangements in a unified government and security guarantees for the island's ethnically Turkish north, where some estimate 30,000 Turkish troops are currently stationed.

"The talks will start again" possibly after the presidential elections scheduled for February in Greek southern Cyprus, Ahmet Sozen, a professor from the department of political science and international relations of Eastern Mediterranean University located in Turkish northern Cyprus, told Xinhua.

"The only feasible solution on the island is a bi-communal and bi-zonal federation" based on the equality of Greek and Turkish Cypriots, he said.

Reunifying Cyprus as a federation has been the objective of peace talks in the last 43 years, especially in the recent years of Turkish threats to annex the north. At least 11 international efforts have been made to strike a deal.

Attempts to reunify Cyprus have failed repeatedly since 1974, when Turkey invaded the island's north after Greek nationalists staged a coup in an attempt to cede the country to Greece.

The best previous chance appeared in 2004, ahead of the accession of Cyprus' internationally recognized Greek southern part to the European Union. Both sides agreed on a plan brokered by Kofi Annan, then UN secretary general. But the Greek-Cypriot population later rejected the plan in a referendum. It then took more than 10 years for serious talks to resume.

Over the past two years, a new series of international efforts led to increasingly promising negotiations in Switzerland. Under UN mediation, leaders of both sides met with the foreign ministers of Greece, Turkey and Britain, which governed the island from 1878 to 1960 and retains military bases there.

According to analysts, the deal-breaker for the Cypriot government is Turkish military forces. Nicosia considers the presence of Turkish troops in the northern 37 percent of the island a human-rights violation.

The government also rejects security guarantees that would allow Turkey to intervene if one side decided that the reunification agreement had been violated.

On Wednesday, the Turkish Cypriots celebrated the 34th anniversary of the Turkish Republic of Northern Cyprus (TRNC), a breakaway state that Turkey is the only entity to recognize as independent.

"While Cyprus is not at the top of the UN agenda, the energy that has led to inconclusive yet hopeful talks in the first half of this year should not be wasted," said Sozen.

A recent survey shows some 70 percent of both communities yearn for a settlement despite frustration.

The talks "suddenly collapsed and created a feeling of desolation and bitterness not only here (Turkish side) but also on the other one (Greek side)," Odul Asik Ulker, a veteran Turkish Cypriot journalist, explained to Xinhua.

"Younger Cypriots, like myself, born after the island's de facto partition, are more and more interested in reunification, " she said. "They think the time is ripe for it after all those years of work on a possible agreement."

"Young people here know that the country (TRNC) in which they are living will never be recognized by the world and they will remain ostracized, so they want to be part of the world by means of a settlement," Ulker added.

Ankara and the Turkish Cypriots who supported strongly the latest round of talks are also growing impatient.

"It is out of the question for the TRNC to allow a pursuit (for solution) to continue fruitlessly for another 50 years," said Akinci on Wednesday.

A Turkish diplomatic source told Xinhua that the Cyprus issue was one of the topics discussed when Turkish Prime Minister Binali Yildirim met with Guterres in New York during his recent trip to the United States.

"We are still of course in favor of a settlement on the island but the security of the Turkish Cypriots should be guaranteed, that is a must," the source said on condition of anonymity.

However, some people believe there is no future in useless and time consuming talks and that the perennial split is in fact the solution to the problem.

In an article published early October in the British daily Independent, former British Foreign Secretary Jack Straw insisted that the partition of Cyprus is a sine qua non to be recognized if ties should improve between the island's ethnic populations.

"For any negotiation to succeed, both sides (of Cyprus) have to be able to gain something. But, from the Greek Cypriot point of view, conceding political equality with the Turkish Cypriots means giving power away," said Straw.

"It's time for the international community to acknowledge this reality and recognize the partition of the island. That would be far more likely to improve relations between the two communities than continuing the useless merry-go-round of further negotiations for a settlement that never can be," added the British top diplomat between 2001 and 2006.