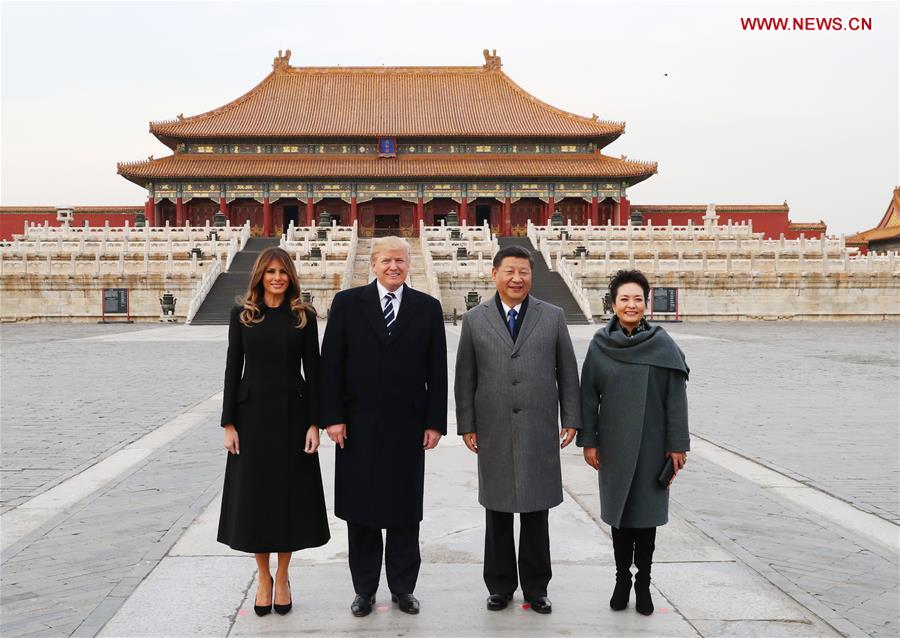 Chinese President Xi Jinping (2nd R) and his wife Peng Liyuan (1st R), and U.S. President Donald Trump (2nd L) and his wife Melania Trump pose for a photo in front of Taihedian, the Hall of Supreme Harmony, during their visit to the Palace Museum, or the Forbidden City, in Beijing, capital of China, Nov. 8, 2017. (Xinhua/Xie Huanchi)

They walked along the museum's central axis, also the axial line of Beijing, and visited Taihedian, Zhonghedian and Baohedian, three main halls of the Forbidden City.

During the tour of the ancient palace, Xi briefed the visiting couple on the museum's history, architecture and culture, which received high praise from them.

Taihedian is one of the largest wooden structures in China and the largest hall in the Forbidden City. Emperors of Ming (1368-1644) and Qing (1644-1911) dynasties held their enthronements and wedding ceremonies in the hall.

Zhonghedian, the Hall of Central Harmony, is a square building with windows on all four sides. Officials would kowtow to the emperor from here before he presided over grand ceremonies in Taihedian. The emperor examined sacrificial writings in Zhonghedian before offering sacrifices to the ancestors, to heaven and to earth.

Baohedian, the Hall of Preserving Harmony, served as the wedding venue for Emperor Shunzhi of Qing Dynasty. At every Chinese New Year's Eve and on the fifteenth day of the first month on the lunar calendar, emperors held banquets here to entertain vassals, imperial kinsmen and high-ranking ministers.