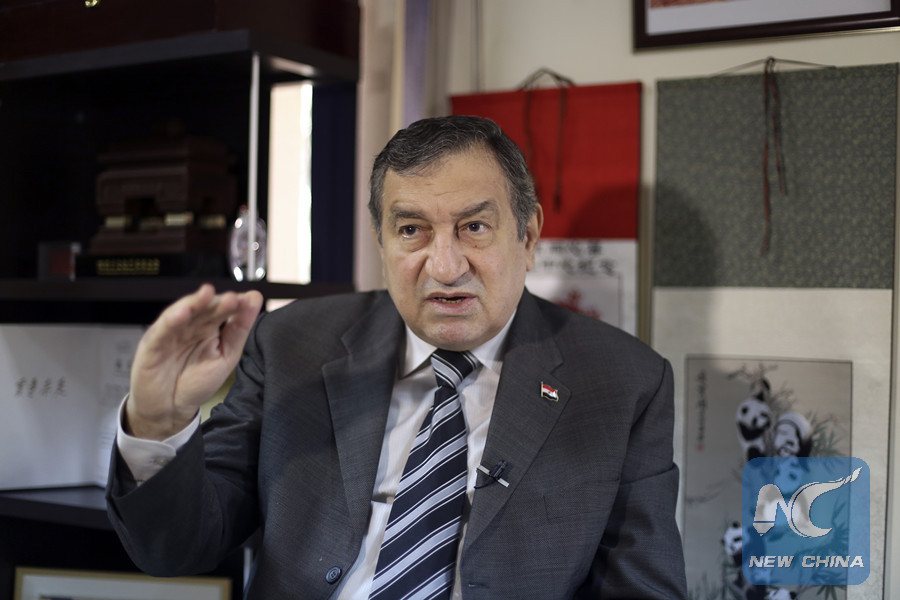 CAIRO, Nov. 6 (Xinhua) -- Egypt on Monday reaffirmed its support to China's Belt and Road (B&R) Initiative, while calling for increased Chinese investment in the most populous Arab country.

"Egypt supports the Belt and Road Initiative that connects China with the world's continents through massive networks of land and sea routes," Ibrahim Mahlab, Egyptian president's assistant for strategic and national projects, told a forum in Cairo.

Describing the China-Egypt ties as "strong, unique and sustainable," Mahlab, also a former prime minister, expected the initiative to "restructure the traditional models of world trade."

Egyptian and Chinese officials, businessmen, representatives of financial and economic institutions as well as a delegation from the Communist Party of China on Monday attended the forum, entitled "Belt and Road... Together for Better Future."

The participants at the forum, co-organized by Sharaf Foundation for Sustainable Development and the Chinese embassy in Cairo, discussed ways to boost China-Egypt economic, trade and cultural relations and the available investment opportunities under the Belt and Road Initiative.

Proposed by Chinese President Xi Jinping in 2013, the initiative, officially called the Silk Road Economic Belt and the 21st Century Maritime Silk Road, aims at building trade and infrastructure networks along the ancient trade routes to link Asia with Africa and Europe.

"Being a central point between Africa and Asia, Egypt is also a focal axis of Arab and African trade," Mahlab said, highlighting the significance of Egypt's strategic location for the Belt and Road Initiative.

He noted that Egypt has carried out massive infrastructure projects over the past three years that have greatly upgraded the country's energy supplies and road networks which could help future investors in the country.

Egypt has shown keen interest in joining the Belt and Road Initiative at a time when it is undertaking an ambitious economic reform.

The conference was attended by some 150 Egyptian businessmen and 160 others from the BRICA states, in addition to major financial institutions including China Development Bank, Industrial and Commercial Bank of China, African Development Bank and the Common Market for Eastern and Southern Africa.

Egypt also sent a high-profile ministerial delegation to the Belt and Road Forum for International Cooperation that was held in mid-May in Beijing.

Former Egyptian Prime Minister Essam Sharaf, head of Sharaf Foundation for Sustainable Development and chairman of the forum, said that Egypt has distinguished potentials to contribute to the success of the Belt and Road Initiative.

"Egypt has a unique geographic location that makes it a main meeting point between the east and west, and the south and north through its Suez Canal corridor that it currently develops to become a pioneering economic and industrial zone rather than just a key waterway that connects different parts of the world," Sharaf told the forum.

He said that the 60-year-old China-Egypt relationship is "a model of successful and distinguished ties between two influential countries in their regions, referring to the elevation of the bilateral ties to the level of "comprehensive strategic partnership."

Sharaf said the forum will shed light on the Egyptian and Chinese experiences in development and construction, while serving as a platform to exchange expertise and explore the investment opportunities in various fields in Egypt.

He also hailed the participation of Chinese companies in some mega projects in Egypt, including the construction of a new administrative capital city and the development of the electricity and energy sector, in addition to their projects in the field of transport.

China's TEDA corporation, one of the oldest and largest industrial developers of the Suez Canal Economic Zone (SCZone), is currently developing an industrial zone of 7.23 sq km in Ain Sokhna on the Red Sea coast, whose first phase was already completed and has attracted 68 enterprises in different fields of production.

Wang Xiufeng, head of the Chinese delegation, described the forum as "an important measure to promote cooperation between China and Egypt through civil society channels."

"Egypt has a strategic location, which is a very obvious advantage that makes it a natural partner of China in the Belt and Road Initiative," Wang told the forum.

"The Belt and Road Initiative provides a key platform for China and Egypt to share advantages, achieve common development, and promote cooperation between the two countries," Wang added.