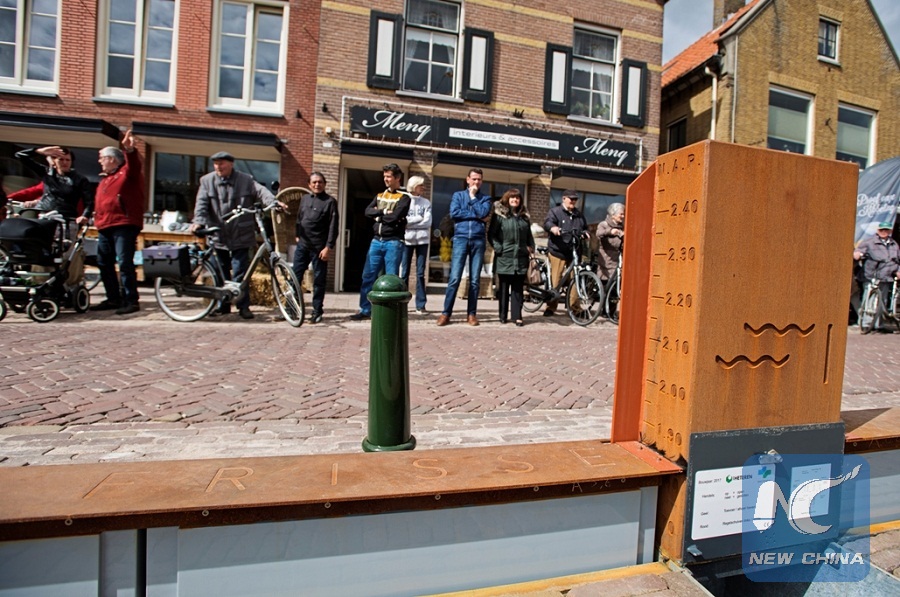 SPAKENBURG, The Netherlands, Nov. 6 (Xinhua) -- A 300-meter self-closing flood barrier, the longest in the world, is built in the historical fishing harbor of Spakenburg in central Netherlands, a latest addition to the low-lying country's innovative approach in flood protection.

"This flood barrier is a beautiful example of tailor-made solutions we develop to protect vulnerable areas, especially urban areas, a task which could not be done with traditional dike reinforcements," Roeland Hillen, director of the Dutch Flood Protection Program told journalists attending a test of the barrier on Monday.

Witnessed by locals, water officials and journalists, the barrier came out of the ground and rose to the planned height of 80 centimetres in about 20 minutes as water was pumped from the small port into a kind of "pockets" underneath to push it up. When deactivated the barrier disappears into the pavement. Only the steel top that stretches around the harbor is visible.

"That is exactly what happens when the water in the port rises if a severe storm hits the historical harbor," explained Hillen.

Steel tanks beneath the barrier, made of plaques of lightweight Kevlar material with a steel top, will then be naturally filled by the high water levels. The inflow of water will autonomously push the barrier up and out of its underground resting place.

Such a construction cost 7 million euros, three times more than a traditional dike.

"It is worthwhile because this barrier does not interfere with the typical character of this historical harbour. It takes up little space and respects the human environment of the former fishing village, which has become a tourist destination," said Tanja Klip-Martin, chairwoman of waterboard Vallei en Veluwe, the broader area surrounding Spakenburg. 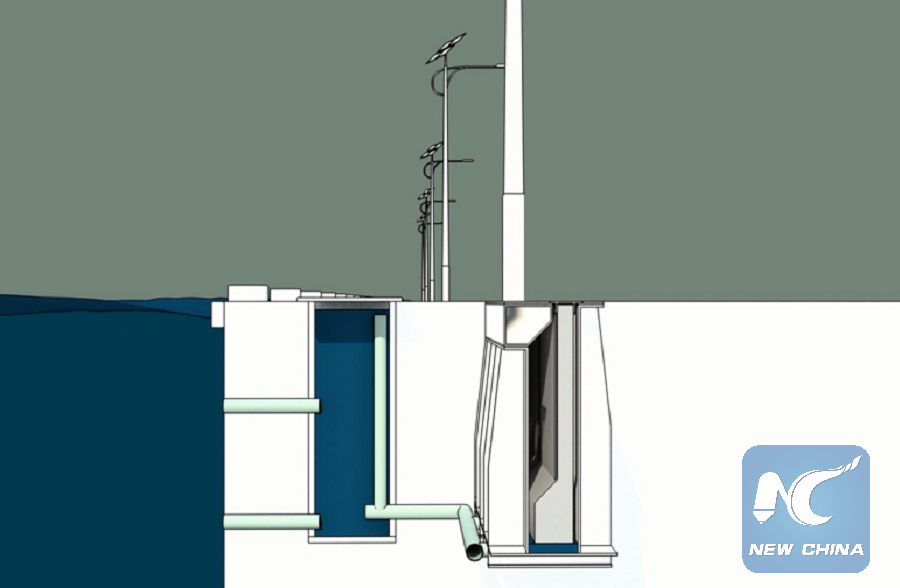 When storm comes, steel tanks beneath the barrier, made of plaques of lightweight Kevlar material with a steel top, will be naturally filled by the high water levels. The inflow of water autonomously pushes the barrier up and out of its underground resting place.(Photo courtesy of Rijkswaterstaat)

"It is first time that this technique is applied on primary water barriers in the Netherlands and the world," she added. "And it is one of the leading examples of working together in an almost 'community building' way."

The barrier is also a latest addition to the innovative approach in flood protection in the Netherlands. The country is divided and ringed by the world's most extensive dike network of over 22,500 km, with prominent technology enhanced and innovative solutions.

"We must anticipate what is coming in the future. Increasing amount of heavy rain falls, periods of drought have now become normal phenomena in our densely populated delta area," explained Klip-Martin.

According to Rijkswaterstaat, the Dutch national water authority, sea level of the North sea at the Dutch coast has risen approximately 23 cm in 125 years (1.9 mm per year). Almost similar to the global rise of sea level of 22 cm during the same period. But, since 1993 the global sea level rises in a faster pace than estimated before.

The Dutch invest over 1 billion euros a year in water safety, drought, availability to sweet water and climate adaptation, of which 400 million euros are invested in flood protection.