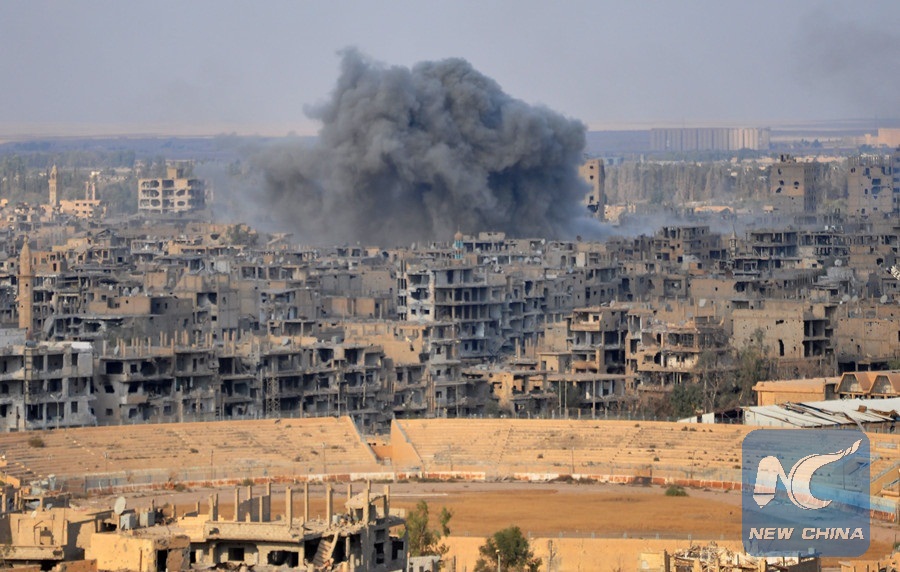 DAMASCUS, Nov. 5 (Xinhua) -- A suicide car bomb attack carried out by the Islamic State (IS) militants in Syria's eastern province of Deir al-Zour killed 75 people and wounded 140 others, a monitor group reported on Sunday.

The Syrian Observatory for Human Rights said children were among those killed in the blast that took place Saturday evening on the eastern bank of the Euphrates River in Deir al-Zour.

The UK-based watchdog group said the explosion rocked the Tujar, or Merchants, Street between the Conoco gas field and the Jafra energy plants in the eastern province of Deir al-Zour.

It added that many people have fled toward the desert region following the explosions carried out by the IS group.

Following the blast, the road was closed and the prices of all foodstuff have tripled in IS-held areas since the blast rocked on Saturday.

The areas on the eastern bank of Euphrates River are largely controlled by the U.S.-backed Syrian Democratic Forces (SDF), who are advancing in that area against IS. The Observatory said two SDF fighters were killed in the blast.

It wasn't the first time IS militants targeted that area. Last month, 18 people were killed when IS carried out similar bombing there, said the observatory.

The SDF has launched an offensive to defeat IS in the northern and northeastern countryside of Deir al-Zour province, which explains the IS suicide attacks.

The IS group is also losing ground to the Syrian army, which captured recently the entire capital city of Deir al-Zour.

Liberating the city is the second major blow to the IS militants, after losing their de facto capital of Raqqa last month to the SDF.