Fishing for fortune in the Gobi Desert Seven families of fishermen have traveled from the Yangtze, China's longest river, deep into the Gobi Desert to earn a better living.

Seven boats and seven tents serve as their temporary homes along the shore of Ulungur Lake, called "the sea in the Gobi," in northwest China's Xinjiang Uygur Autonomous Region. 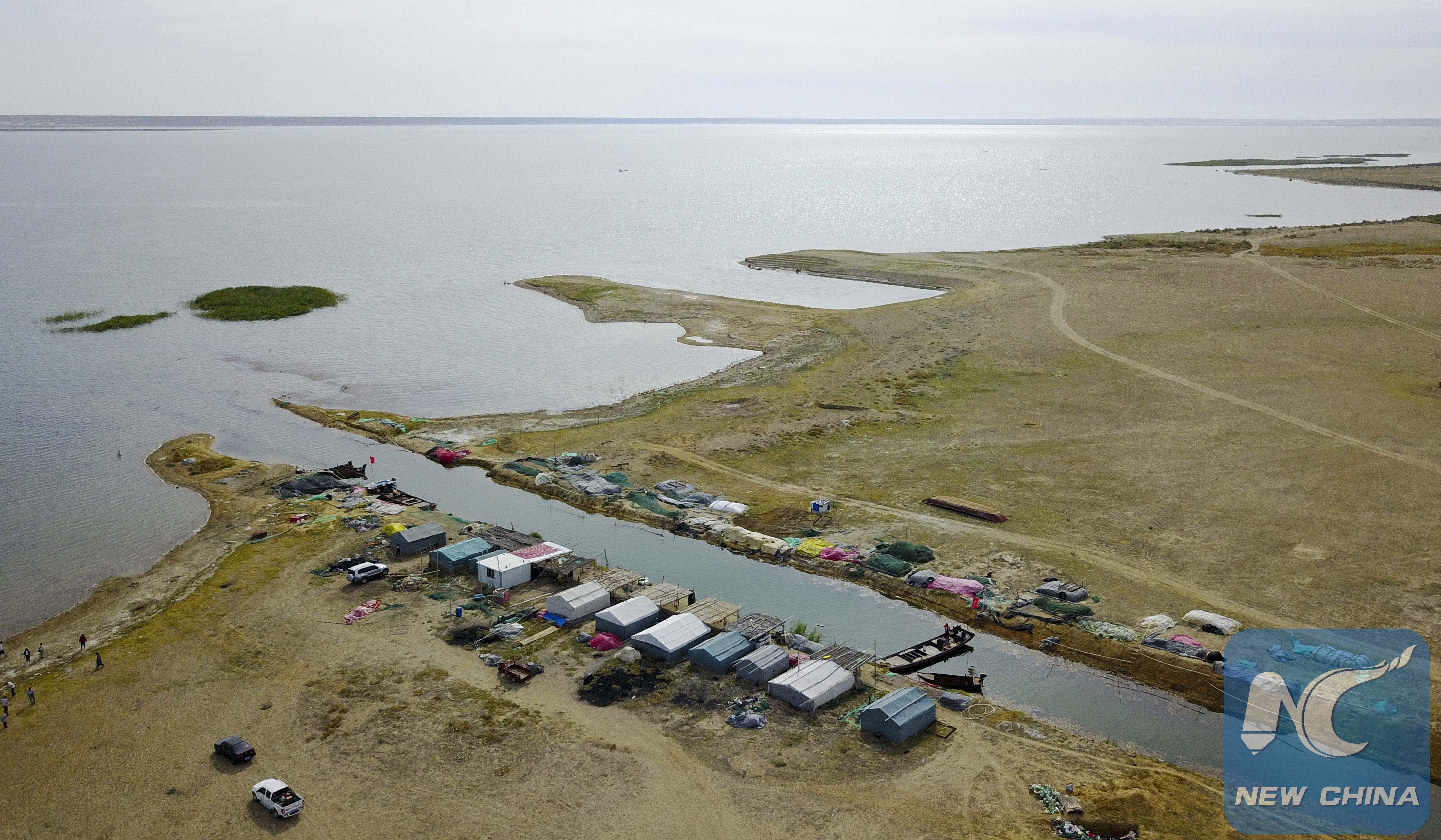 "I have heard that it's easier to 'dredge money' here," says Chen Guishan, 50. The thinly populated region has been attracting hardworking people to help drive local development.

Chen and his wife Zhao Youlan were born, married and fished along the Yangtze River in east China until nine years ago, when they joined the "desert fishermen team." They hoped their paradoxical new job might bring them wealth. 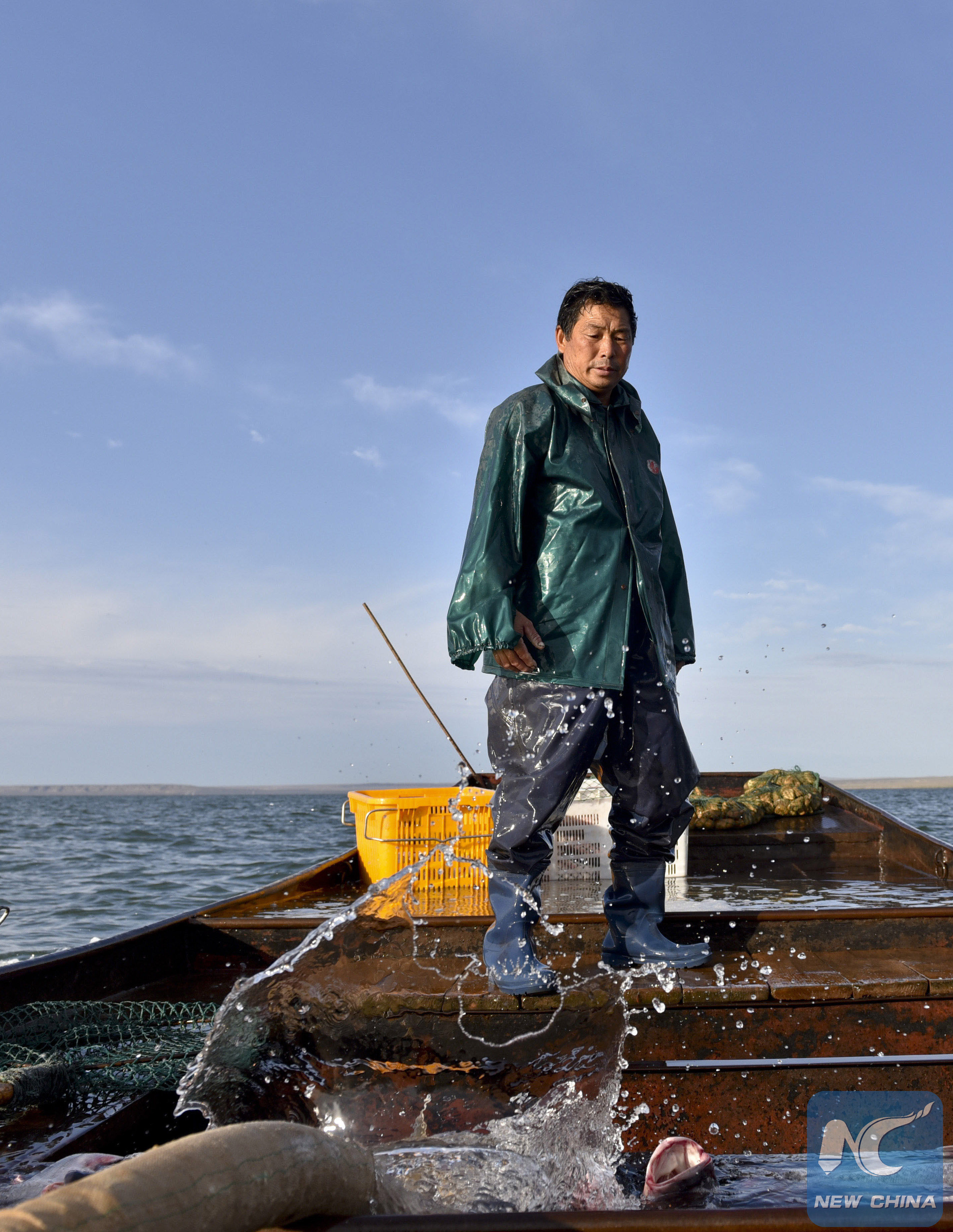 Ulungur Lake in northern Xinjiang and Bosten Lake in southern Xinjiang are the two major fishing bases in the region. The two lakes, about 1,000 kilometers apart, are two of the largest inland freshwater lakes in China and cover a total area of 1,600 square kilometers.

To make more money, the seven families lead a nomadic life, just like local herders. They fish in Ulungur Lake in spring and summer, and then they migrate to the warmer Bosten Lake when autumn comes.

Their work in Ulungur begins after an annual fishing moratorium ends. Chen's family starts work at six o'clock in the morning, when the sky is still starry. Chen and his 25-year-old son, Chen Zhaozhu, walk out of their tent, put on water-proof pants and life vests, and set sail. 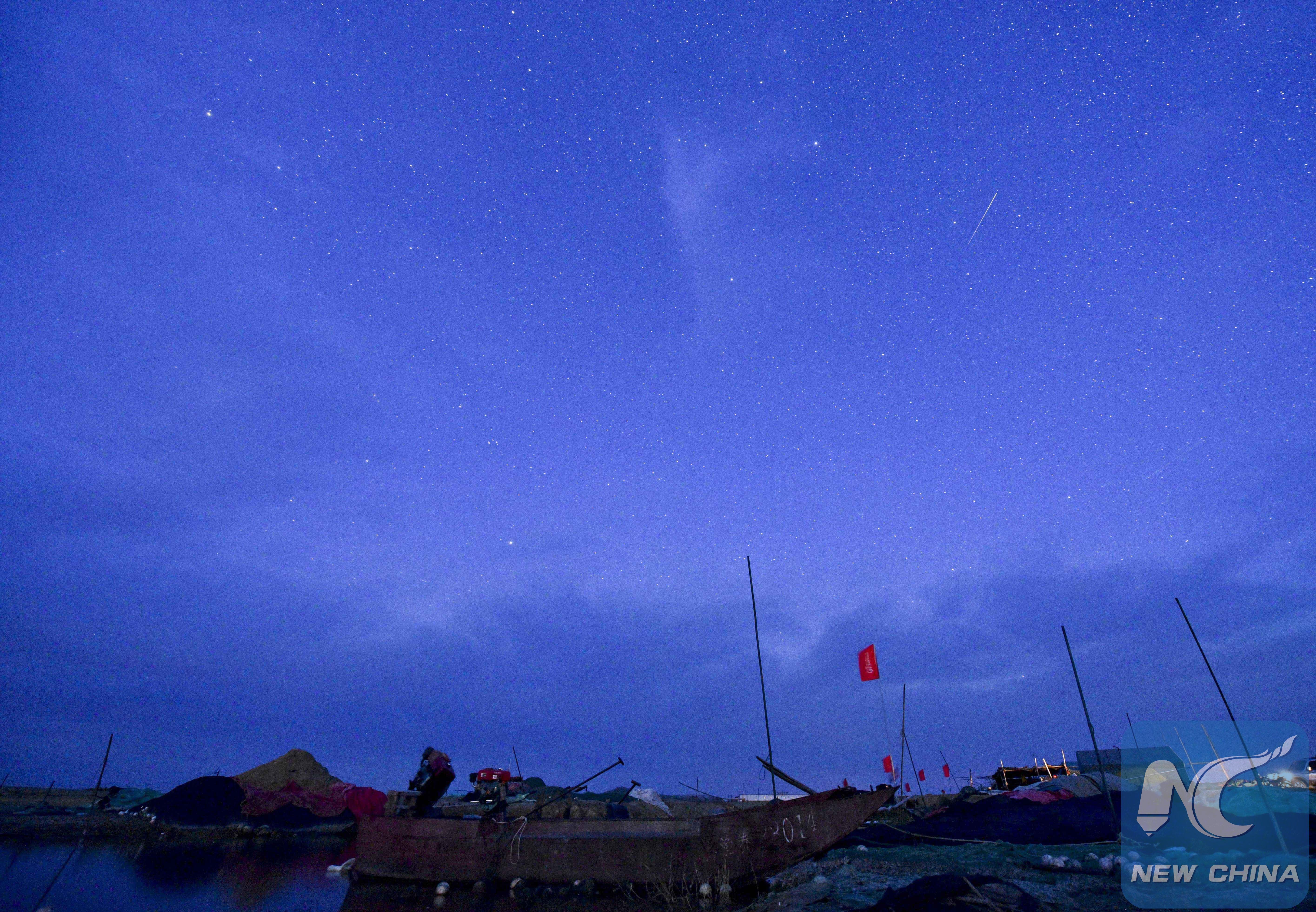 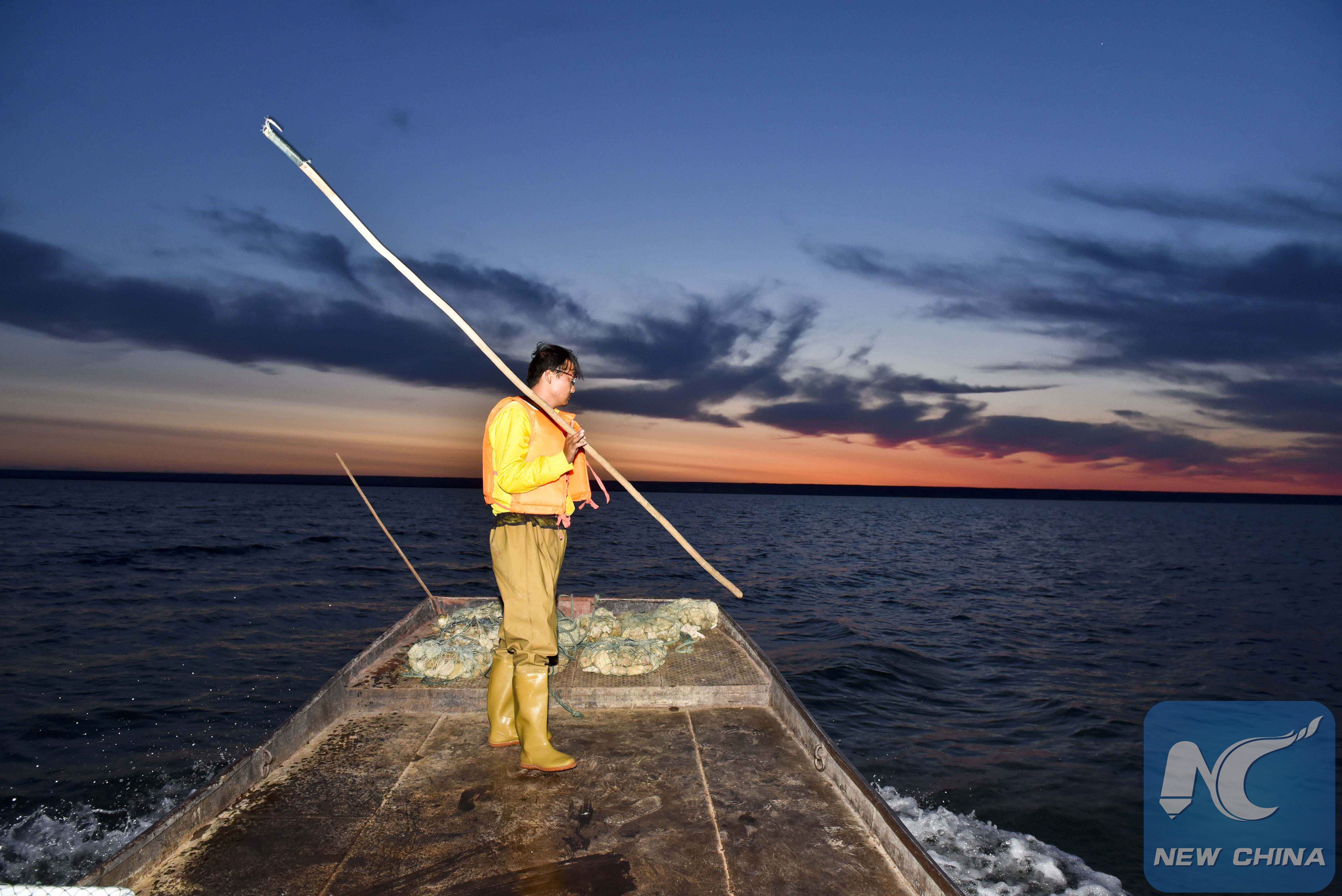 In the light of dawn, they spot other boats sliding through on the water. Chen keeps sailing toward the center of the lake. All the way they hear nothing but motors vibrating rhythmically. 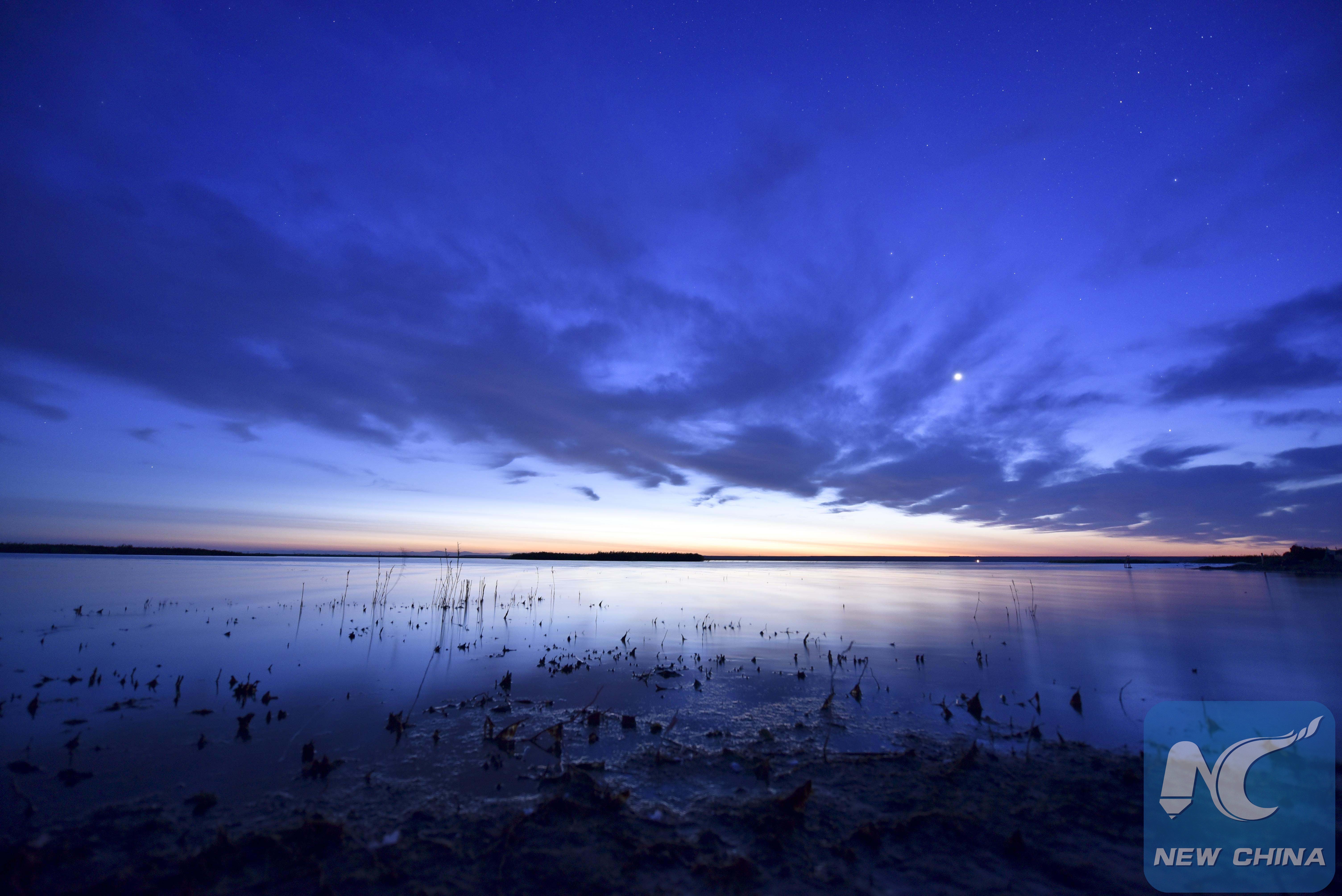 In about half an hour, the boat arrives at the fishing area. The father and son drop the anchor and cast the net. The duo don't need speech to communicate. When the son hauls the net out of the water, the father selects fish that are large enough to be put into the fish hold, and throws juvenile fish back into the water.

"We must be sustainable. We must set the juvenile fish free to let them grow, so we must pick them out one by one," the older fisherman explains. 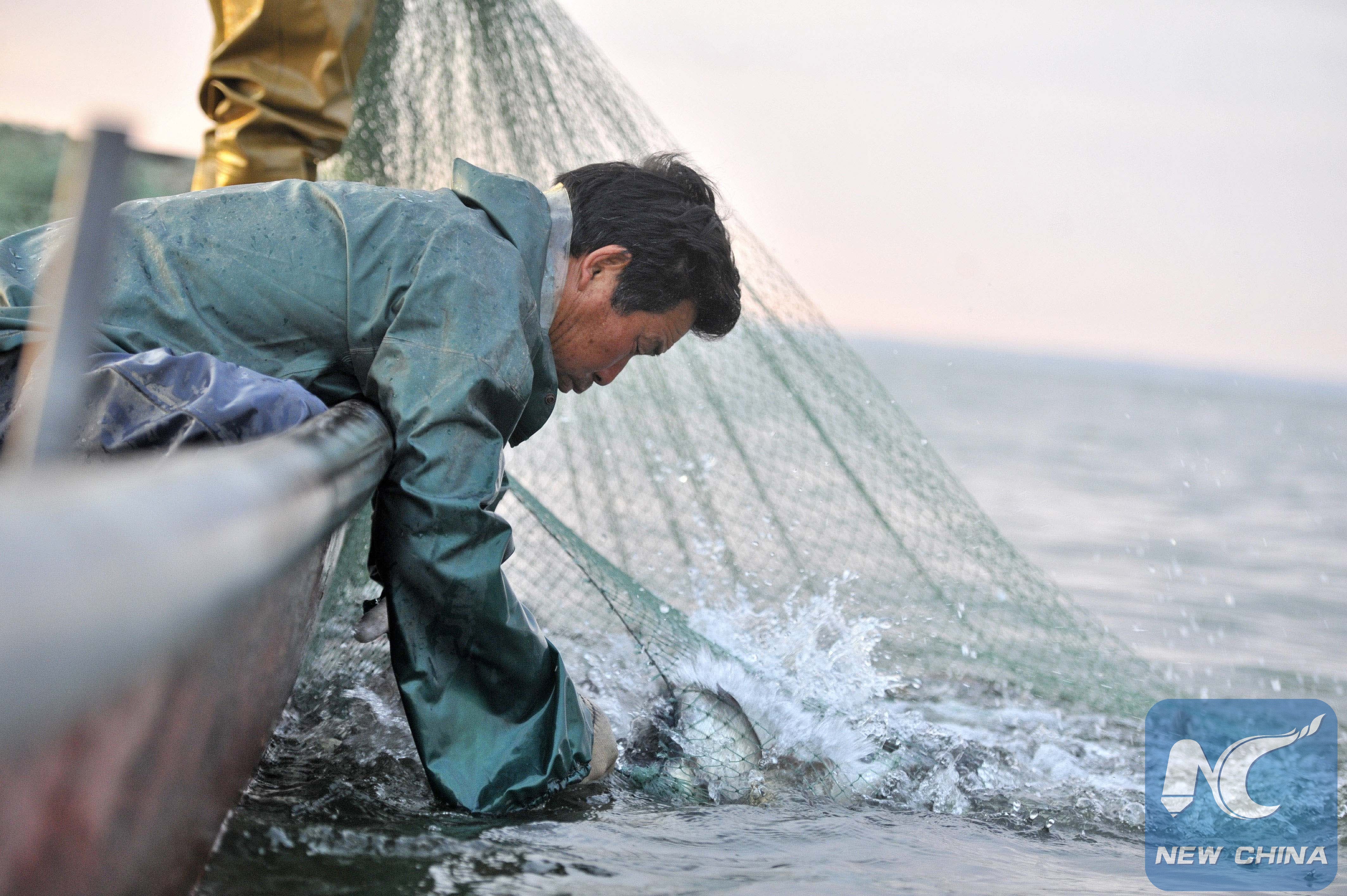 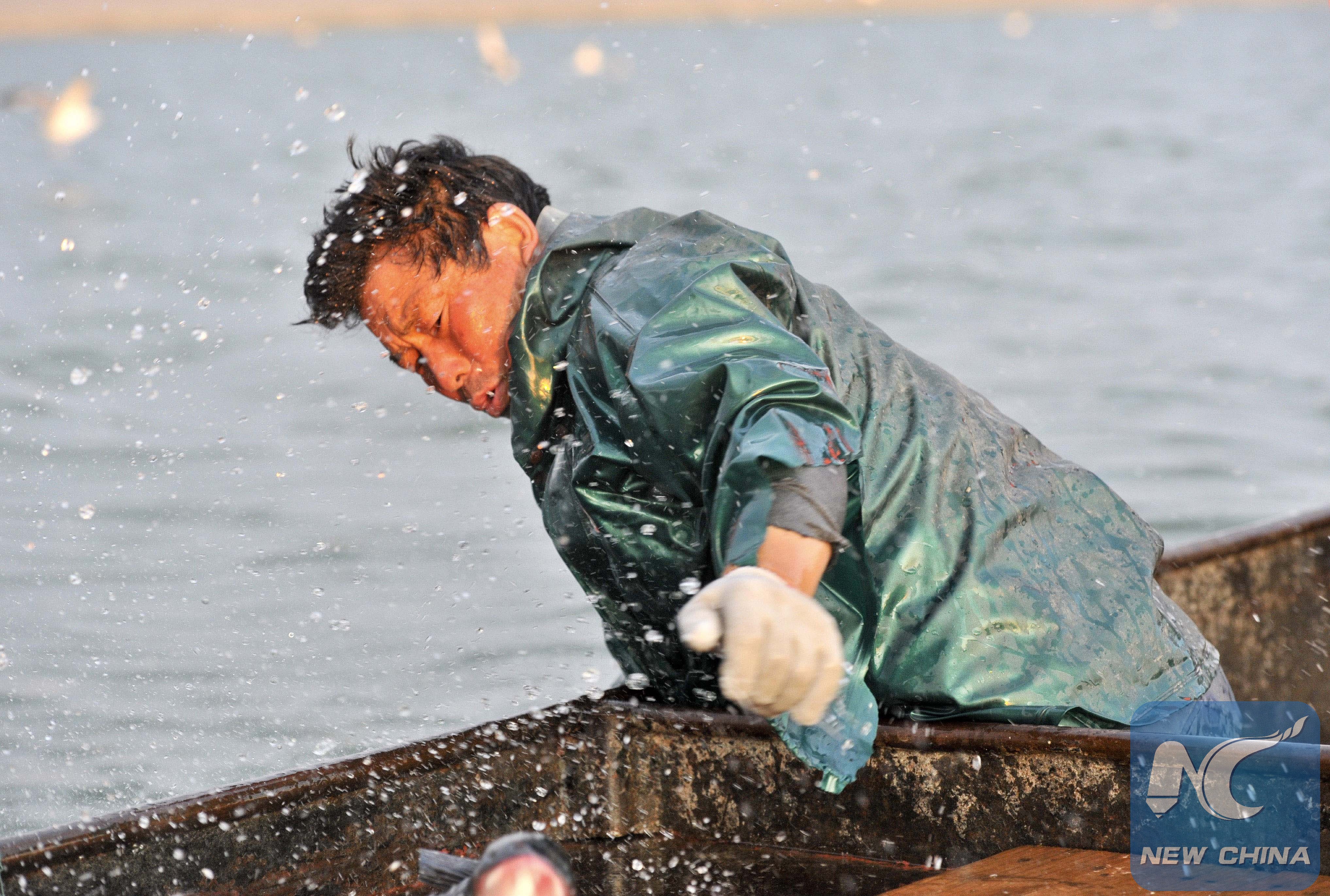 It is a lucky day for them. Two nets make a full load of their cabin. On less favorable days, they have to cast at least eight nets to fill the boat, Chen says.

He adds that it's always windy there, and they can't set sail on windy days. 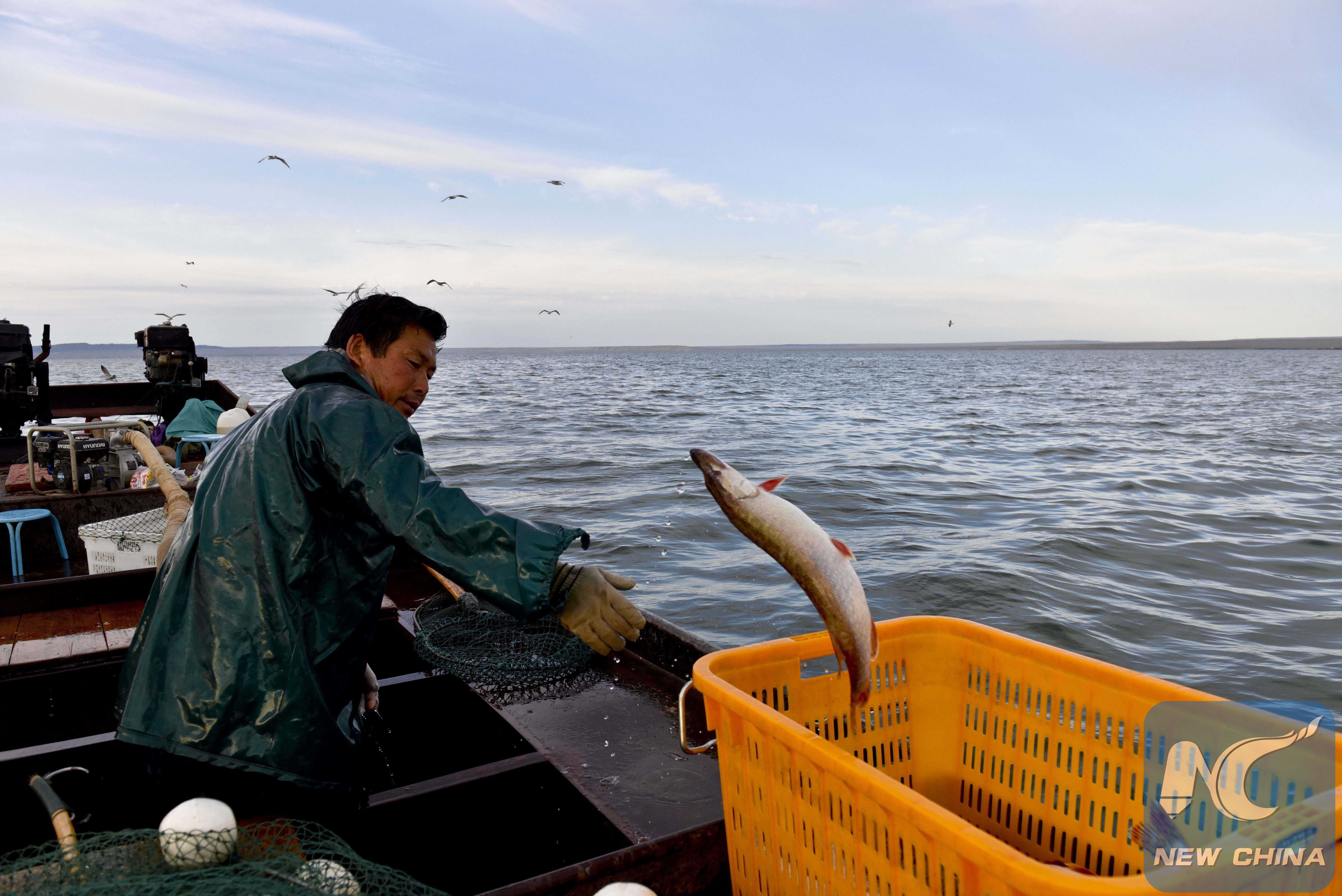 Happy with their catch, they start the engine and sail to the market dock.

For the fishermen, selling is as important as fishing. 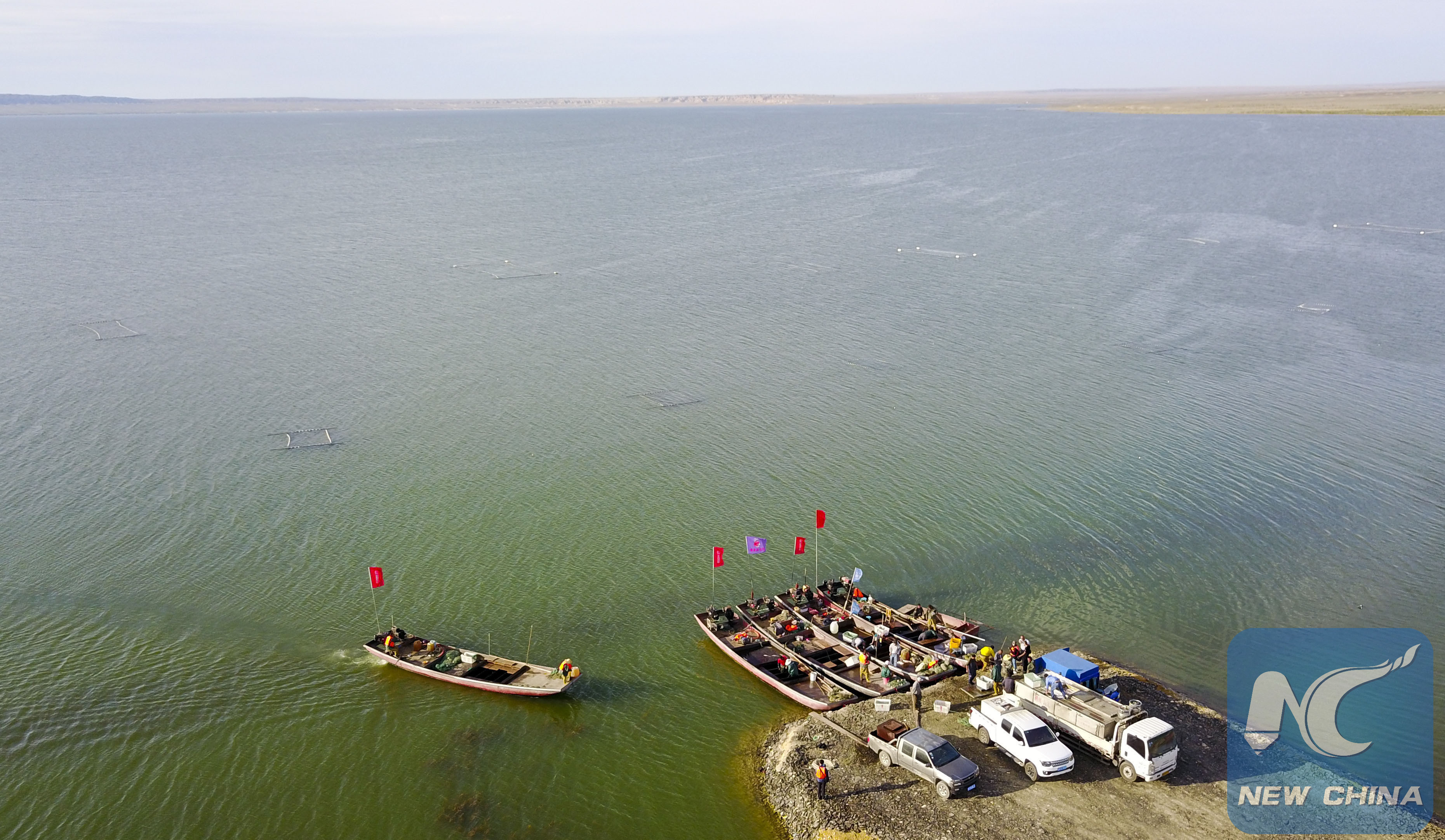 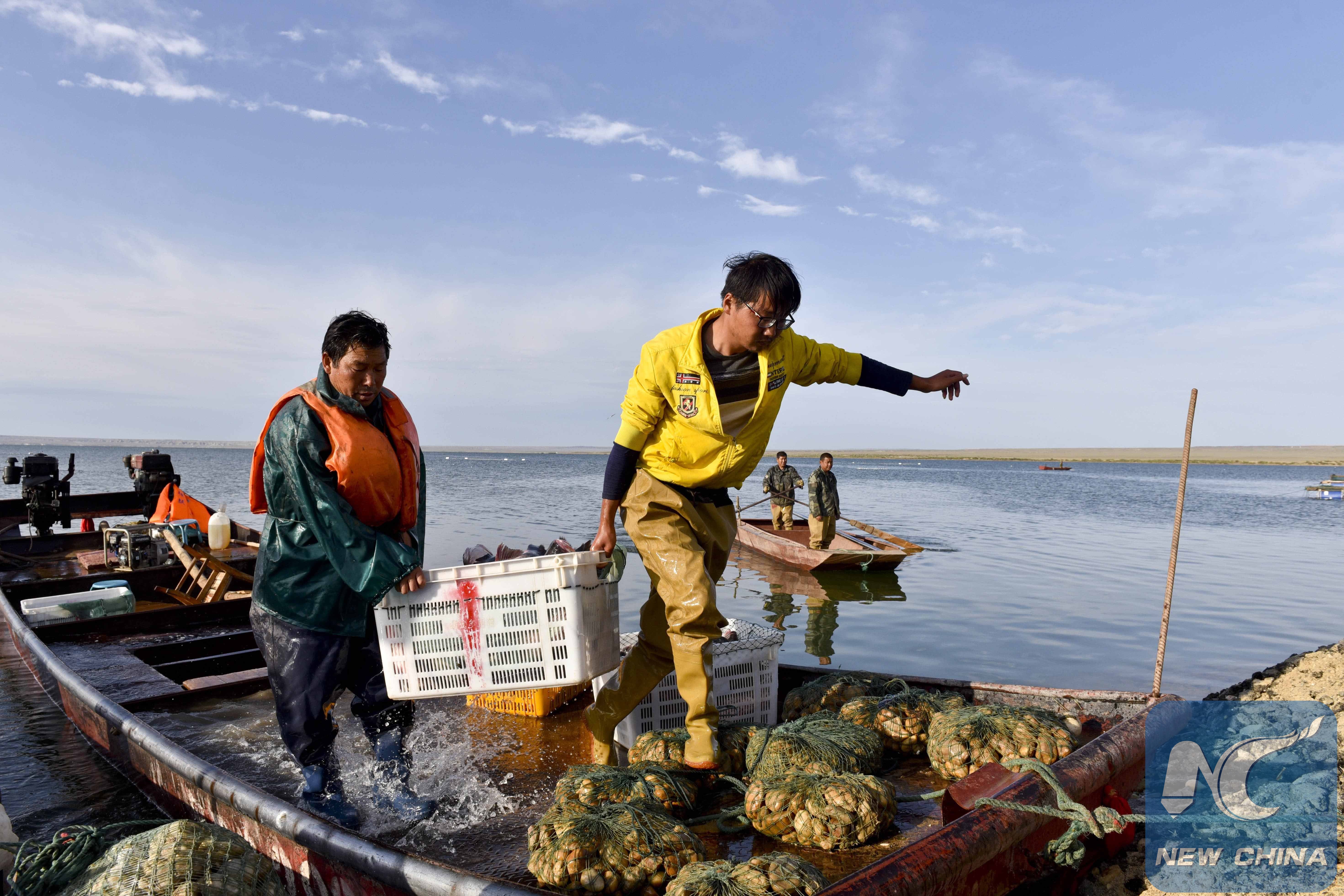 The father and the son carry fish to the market. (Xinhua photo/Hu Huhu)

When they arrive at the market, they see many others have already arrived. The typically reticent father becomes talkative. Eager to sell their fish, he puts the fish straight on a trader's scale. He is reassured only when the trader nods to take his offer. 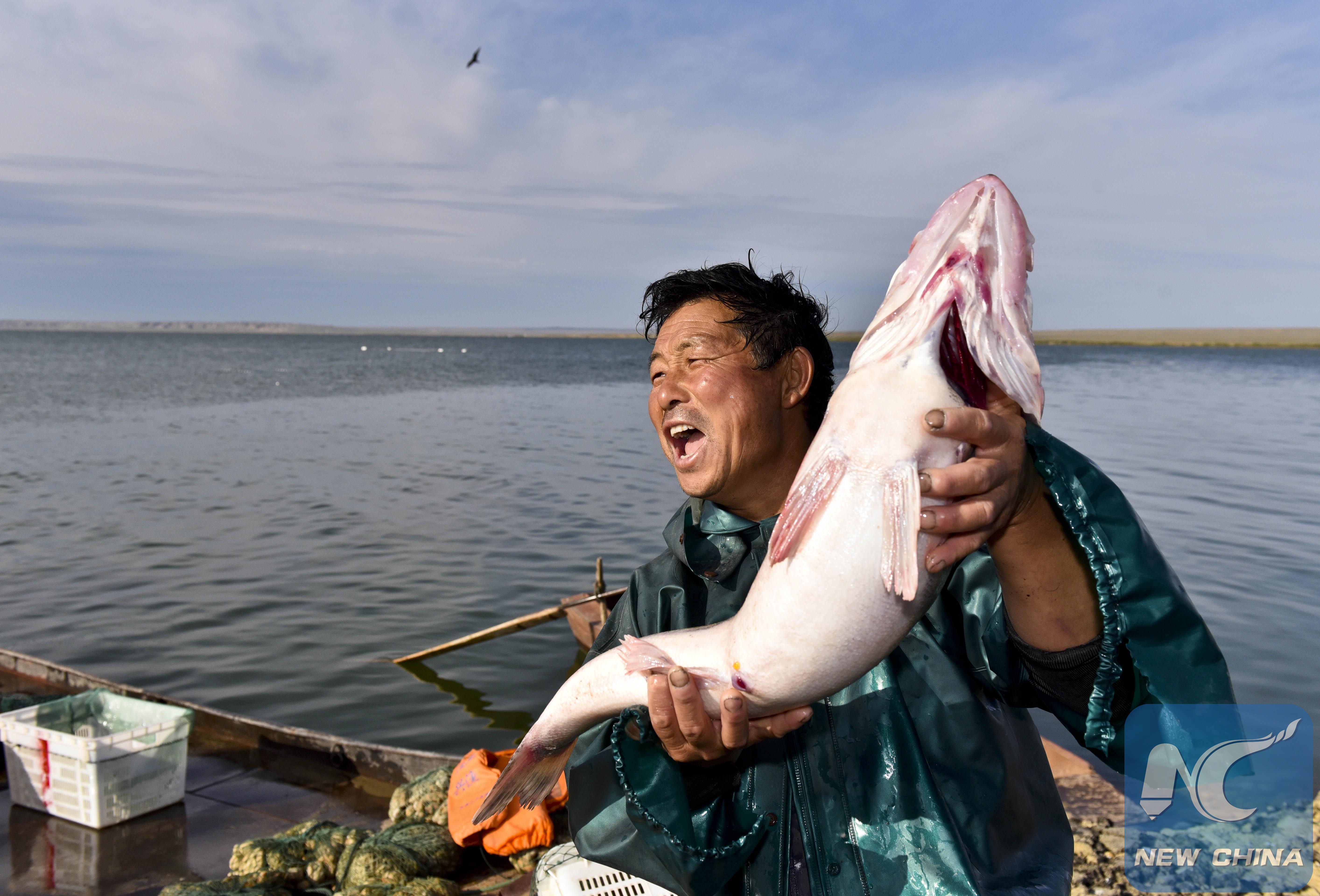 The freshly caught fish will soon be served on tables in Urumqi, capital city of Xinjiang, as well as cities nationwide, thanks to China's fast-growing logistics services.

It has long been a tradition for locals to fish in Ulungur.

"The lake brings us wealth, so we must protect the environment here," says Zhao. "We follow strict fishing restrictions and regulations to protect the natural resources." The father and son go home contented with the 1,600 yuan (243 U.S. dollars) they have earned from about a tonne of fish.

When they get home, Zhao Youlan is preparing lunch. Fish with vegetables is a typical meal for the family, she says. 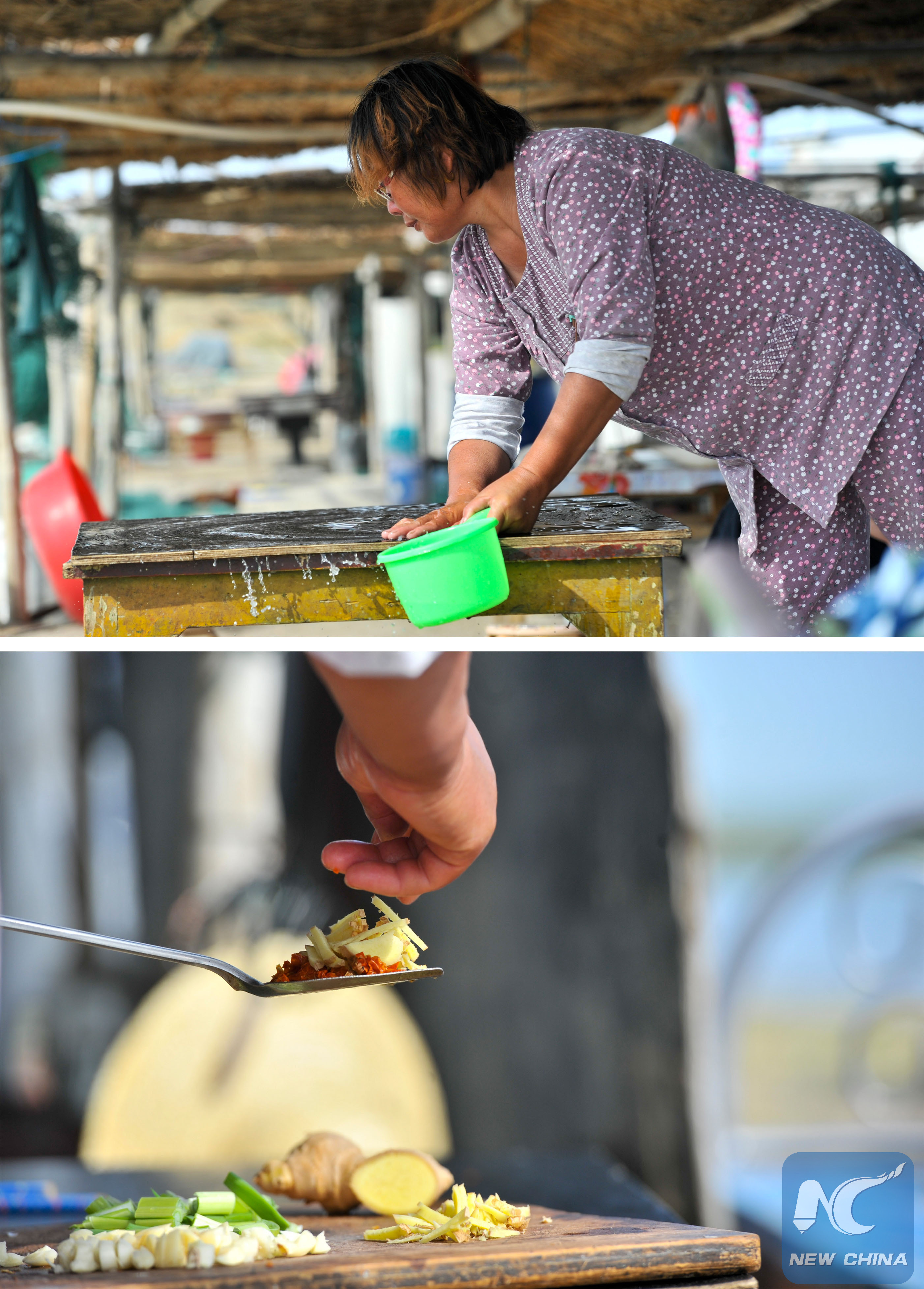 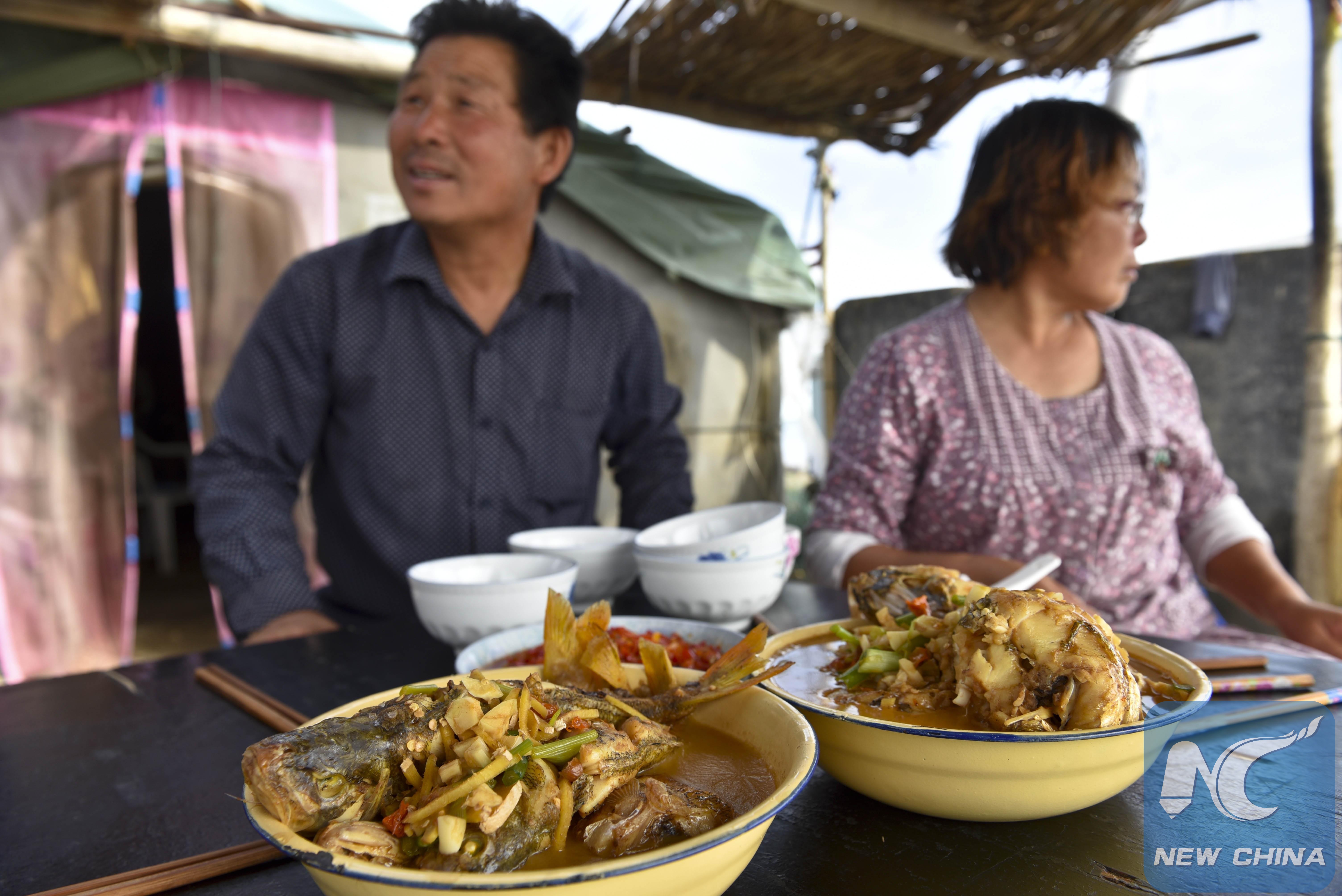 The family are ready for lunch. Fish is a typical dish on their table. (Xinhua photo/Hu Huhu)

Like many who work in the fishing industry, Chen and Zhao suffer from severe arthritis. They live about 20 kilometers from town, so they seldom go there for shopping or entertainment. When at home, Zhao cooks and mends the fishing nets, which she considers the best way to rest.

Many fishermen take a nap after lunch while their wives play mahjong together. But Chen doesn't take a break. He starts to repair their leaking tent. 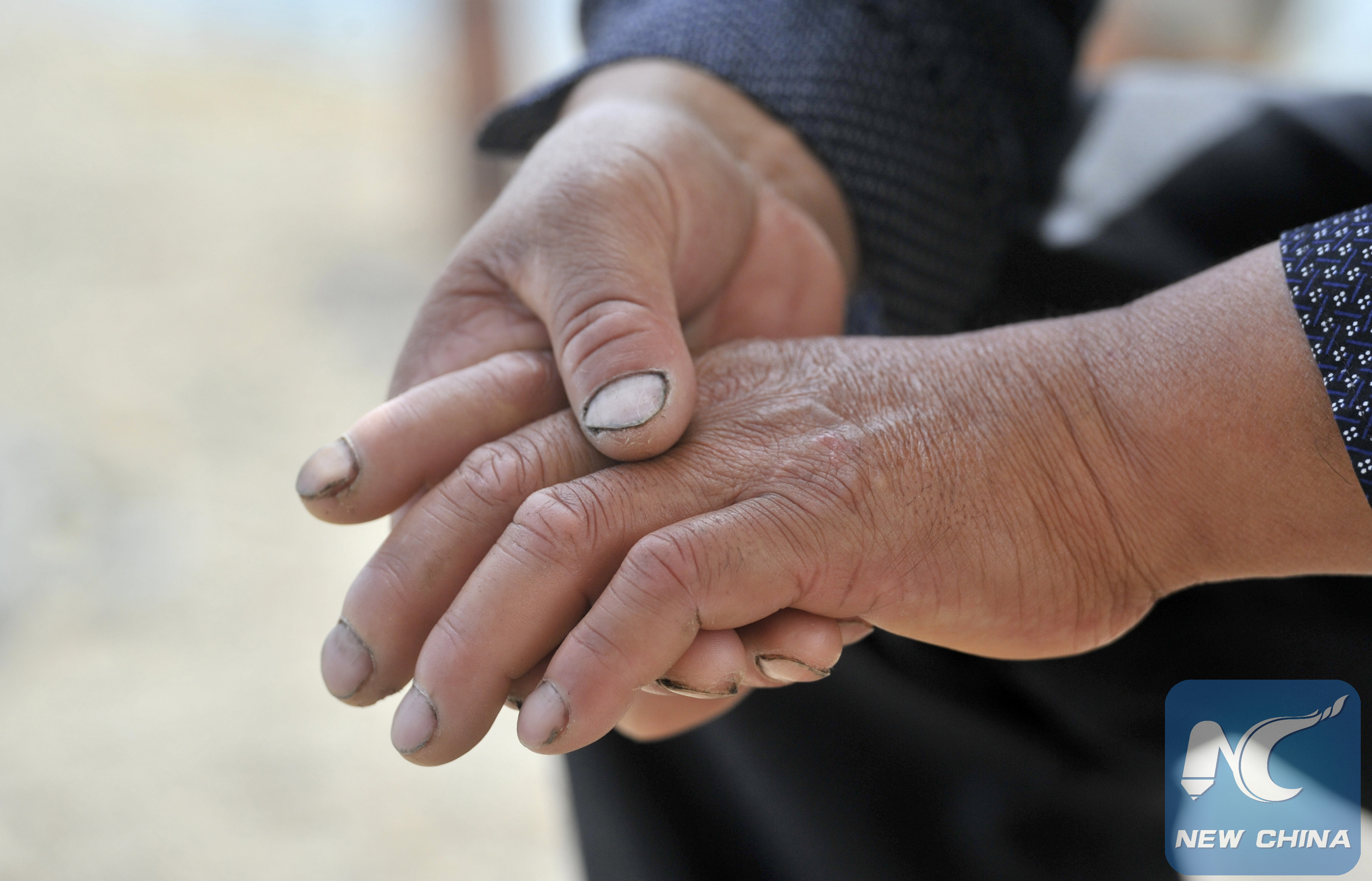 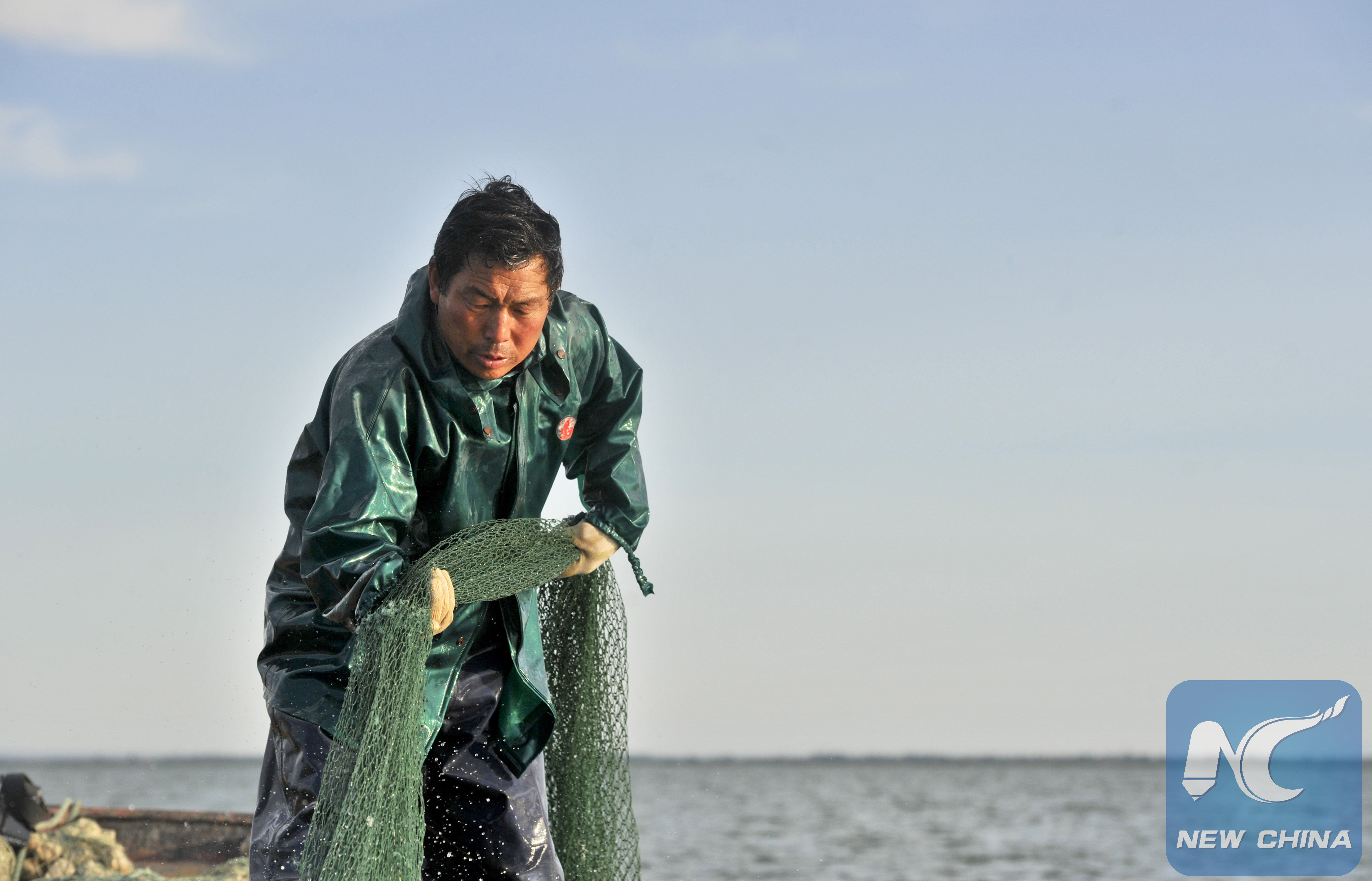 As it is getting cold, the family will soon move to Bosten Lake, where they will continue fishing until they can return to Ulungur.

"I have spent most of my life afloat, so I want to spend my old age ashore," says Chen. "When I have enough money, I will buy a house and come to anchor."