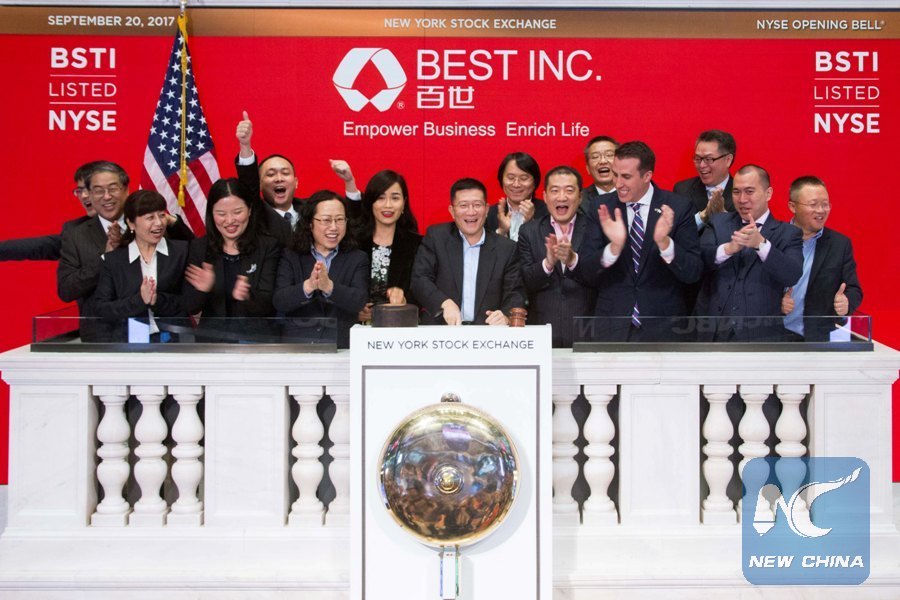 BEST priced its IPO offering at 10 U.S. dollars per American Depositary Receipt (ADR), the lower end of the pricing range of 10 dollars to 11 dollars given by the company, trading under the ticker symbol of BSTI.

However, it is still the biggest Chinese IPO in New York so far this year.

The company started trading at 11.48 dollars per share on Wednesday, jumping 14.8 percent from its pricing.

The company has been focusing on scale and growth, through the expansion of network and service coverage, in line with its philosophy to build and invest for the long term.

BEST is backed by Alibaba and Cainiao Network. The company has a strategic relationship with its largest shareholder, making it a key logistics provider to the world's largest retailer, as Alibaba's platforms serve more than 10 million merchants and more than half a billion consumers.

The company was founded by Johnny Chou, former president of Google China, and is led by a team with technology and logistics expertise.

"New York is one of the world's most important financial centers. By choosing NYSE to go public, BEST will have a better international vision, which can better serve our customers in the future," Chou told Xinhua before the opening bell on Wednesday.

Investors kept a close eye on IPO this year, as public offerings have been slowing down these years.

Proceeds from the U.S. IPO market were only 18.8 billion dollars last year, down from 86.6 billion dollars in 2014, according to investment banking firm Renaissance Capital.