China Focus: From a single tree to a forest -- Saihanba's story 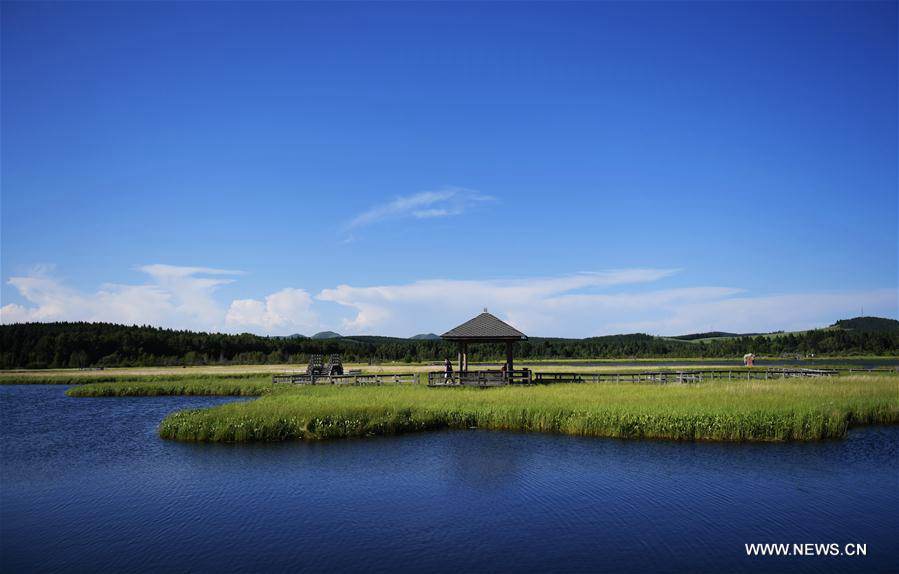 SHIJIAZHUANG, Aug. 5 (Xinhua) -- About 400 kilometers north of Beijing lies a large swathe of trees that is critically important to water and air quality in the capital.

It is an environmental shield which reduces sandstorms.

The Saihanba forest purifies 137 million cubic meters of water for Beijing-Tianjin area and can deliver half a million tons of oxygen, but more than half a century ago it was nothing more than a barren land.

Zhao Yunguo, director of the forest management office, pointed towards a tree, about 20 meters tall, and called it "a tree of merit."

"Fifty-six years ago, there was only one tree, this one. Without it, there would have been no Saihanba," Zhao said.

Saihanba is a combination of Chinese and Mongolian meaning "beautiful highlands". Until the Qing Dynasty (1616-1912), it was a royal hunting land.

When the dynasty was on its last legs, Emperor Tongzhi opened the land for lumber to make up for a state deficit. The area quickly turned into sterile land on the verge of a Mongolian desert.

Efforts to rehabilitate the land started in the 1960s. In October, 1961, a group of six arboriculturalists went on an expedition through the land and studied the possibility of growing trees there.

"They found this one tree, standing alone in the vast land. They literally went to hug the tree, and every one was in tears," said Zhao.

If one tree can survive here, so can millions of trees - such was people's hope with Saihanba. About 56 years later, hope turned into reality. The barren wasteland is now a vast forest of 7.5 hectares.

Planting trees at Saihanba, where temperatures could drop to minus 43 degrees, was a tricky proposition.

In the 1960s, young recruits planted 427 hectares of larches, but hardly any survived, less than eight percent.

"We used to truck in seedlings from northeastern China, and from the south, but it was hard for them to survive the local climate," said Yi Guizhi, a retired tree-planter.

People cultivated seedlings, and took care of them throughout the year. "We sowed the seeds in early spring, cared for them through summer and autumn, and properly protect them through the winter. The seedlings grew to have strong roots, and they were not tall, but rather stout," said Yi.

Over the years, trees in Saihanba survived some of the worst drought, frosts and pests.

"For some plants, we grow them on the land for two years, and put them in jars for two years for them to become strong enough, and then transplant them back to the land," he said.

Plantation efforts are not uncommon throughout China, but many were futile because of a lack of constant care.

In order to succeed, people at Saihanba were persistent. In 2012, about 6,000 hectares of stony land remained, where tree planting was extremely costly and hard.

"We never waited until there was enough money, or enough manpower. We decided it was the right thing to do, to turn the last piece of barren land green," said Liu Haiying, head of the forest management office.

In the last five years, the workers planted trees on 83 percent of the land. The rest of tree planting work will be finished next year, said Liu.

Workers fell trees regularly to allow others to grow, leaving about 15 big trees for every hectare. They plant different types of trees to improve pest and disease resistance.

"Planting a tree to the soil is a skill, but preserving it for the long term is an art," said Zhang Xiangzhong, an official with the forest management office.

China has 200 million hectares of forest, but many are of low quality. "The key to good forestation is good management," said Zhang.

Saihanba has excellent management. Some of its standards have been adopted by other forests. There has never been a report of fire at Saihanba for 55 years. Local precipitation has increased by 60 millimeters compared to years before, and its micro-climate has been improved, experts said.

"The people of Saihanba have upheld a credo of turning the environment green. Their efforts are highly commendable, and such should be the way for other forest management staff to learn," said Shen Guofang, an academician of Chinese Academy of Engineering.