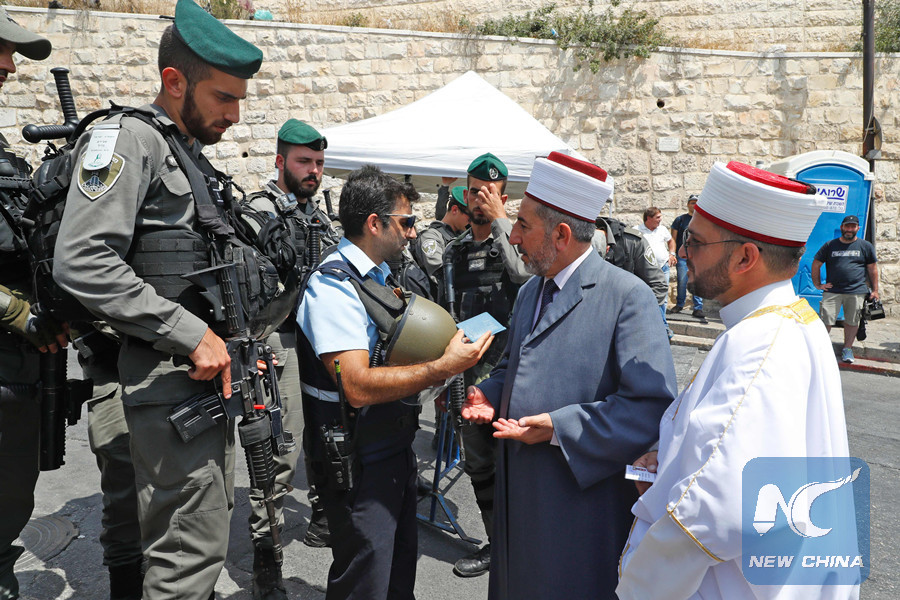 Palestinian Muslim clerics speak with Israeli border guard outside the Lions Gate, a main entrance to Al-Aqsa mosque compound, in Jerusalem's Old City on July 21, 2017, after Israel barred men under 50 from entering the Old City for Friday prayers. (AFP PHOTO)

JERUSALEM, July 21 (Xinhua) -- Israel barred access of Muslim men under 50 to Al-Aqsa mosque compound on Friday and deployed some 3,000 policemen near the site amidst expected protest over security measures.

The move came after Israel's security cabinet decided not to remove the metal detectors installed at the entrances to the Haram al-Sharif compound, known to Jews as the Temple Mount, following a shooting attack nearby last Friday that killed two policemen.

A police spokesperson said in a statement that site is opened for women of all ages and for men over the age of 50.

The spokesperson added that following security assessments, "heightened security will take place in and around the Old City (of East Jerusalem)."

"Police and border police units mobilized in all areas and neighborhoods and will respond to any incidents or disturbances throughout the day. Police are coordinating to enable Friday prayers to take place and at the same time secure measures are taking place," the statement read.

The measure was expected to trigger more anger at the volatile site.

The military and the police boosted their presence with five army brigades that were put on call and 3,000 of police officers were deployed outside the compound area.

The contested electronic gates were installed after three Arab citizens of Israel carried out a shooting attack last Friday, killing two Israeli policemen. The assailants were shot dead by the police.

Worshippers have been refusing to enter due to the new metal detectors, with Palestinians charging the step is an Israeli attempt to claim further control over the site. The measures sparked daily clashes between worshippers and police, with dozens of Palestinian injuries.

On Thursday, Muslim leaders called for a mass prayers in the site on Friday, in protest of the new measures.

The Palestinians, as well as some Arab countries, urged Israel to remove the gates, saying it was a violation of the long-held status quo under which the Muslim Waqf is in charge of running the site.