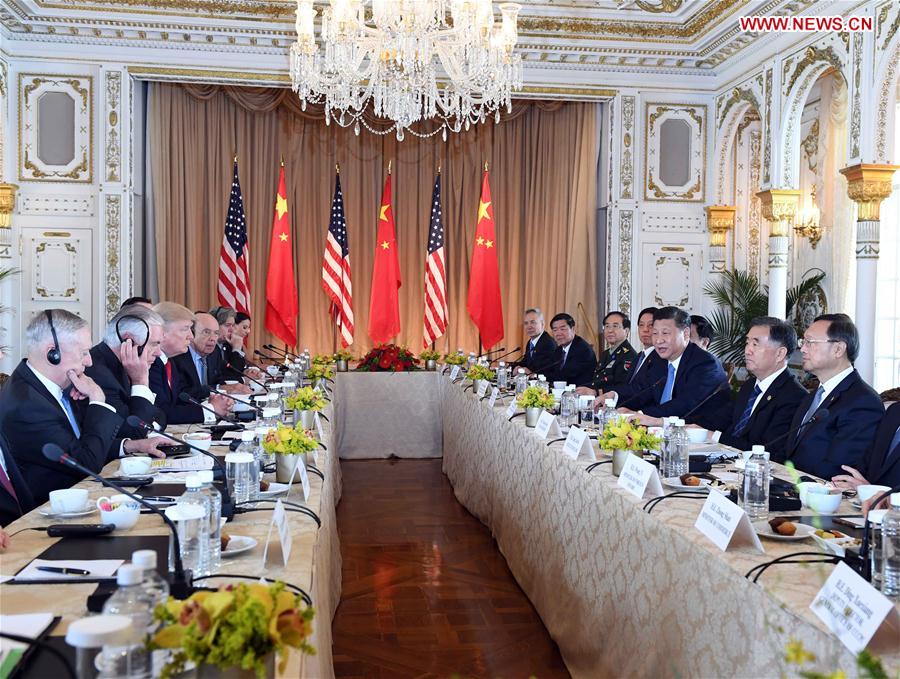 The two leaders also agreed that their first meeting, held at the seaside Mar-a-Lago resort in the U.S. state of Florida, was "positive and fruitful."

During their talks over the past two days, Xi and Trump exchanged views on key areas of bilateral cooperation as well as global and regional issues of common concern.

Xi said his first meeting with Trump bears unique significance to the development of China-U.S. ties.

He added that he and Trump, during the meeting, have also gained better understanding of each other, cemented their mutual trust, scored many major consensuses, and built up a good working relationship.

The two sides need to further enhance their relations so as to better serve the interests of the two countries and their peoples, and to promote world peace and prosperity, Xi said.

China and the United States are now each other's biggest trading partner, from which the two peoples benefit a lot, said Xi.

Xi said China is pushing forward the supply-side structural reform, boosting domestic demand and increasing the share of the services industry in its national economy.

China's economy is to maintain sound momentum of development, and China and the United States enjoy broad prospects in economic and trade cooperation, said Xi, urging the two sides to grasp the opportunity.

"China welcomes the U.S. side to participate in cooperation within the framework of the Belt and Road Initiative," said Xi.

On military relations, which he said make up an important part of bilateral ties, Xi pointed out that mutual trust in military and security areas forms the basis of the strategic mutual trust between the two countries.

Xi proposed that the two sides maintain military exchanges at various levels, give full play to such mechanisms as China-U.S. defense ministry consultations and Asia-Pacific security dialogue, and make good use of the dialogue mechanism to be established between the two countries' joint staffs of the armed forces.

Meanwhile, he suggested that the two sides carry out the annual exchange programs they have agreed upon, and implement and improve the mutual reporting mechanism on major military operations and the code of safe conduct on naval and air military encounters.

"I think we have made tremendous progress in our relationship with China," the White House cited Trump as saying after meeting with Xi, adding that the relationship developed by Xi and himself is "outstanding."

U.S. representatives have been meeting one-on-one with their Chinese counterparts, and progress has been made, said the U.S. president.

Trump said the United States is willing to further strengthen cooperation with China in economy, military affairs and people-to-people exchanges, and support China's efforts in hunting for fugitives who have fled abroad and recovering illicit money.

Ahead of the two presidents' second round of talks, senior Chinese and U.S. officials on Friday initiated the comprehensive economic dialogue and the diplomatic and security dialogue, two of the four pillars of the newly established bilateral dialogue mechanisms.

Xi made the two-day trip to the southeastern U.S. coastal town of Palm Beach for the first meeting with Trump, in a bid to chart the course of bilateral ties in a new era.