Political solution only way out for Syrian issue: Chinese envoy 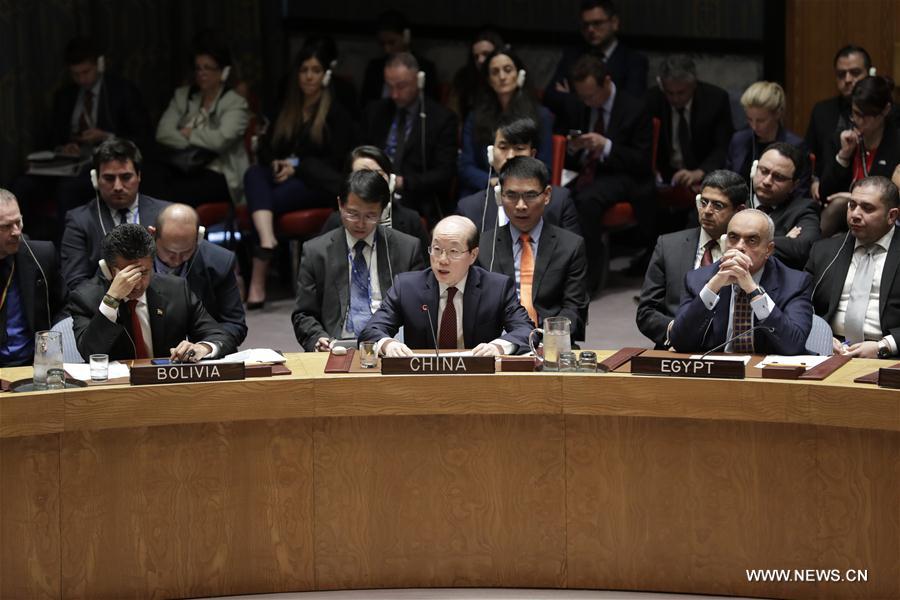 Liu Jieyi (C, front), China's permanent representative to the United Nations, addresses a Security Council emergency session on the situation in Syria at the UN headquarters in New York, on April 7, 2017. Liu Jieyi said here on Friday that political solution is the only way out for the Syrian issue and military means will not work. (Xinhua/Li Muzi)

UNITED NATIONS, April 7 (Xinhua) -- A Chinese envoy said here on Friday that political solution is the only way out for the Syrian issue and military means will not work.

Liu Jieyi, China's permanent representative to the UN, made the remarks at a Security Council emergency meeting that convened after the United Sates launched missile attacks on a Syrian military airfield on Thursday.

Liu said military actions will only worsen the suffering of the Syrian people and make the situation in Syria and the region more complicated and turbulent.

"This is not in the common interest of Syria, regional countries and the international community," said Liu.

"The most urgent issue at present is that all parties work together to prevent the situation in Syria from further deterioration," he said.

Liu said China calls upon all relevant parties to persist in diplomatic efforts, stick to dialogue and consultation and support the role of the United Nations as the main channel of mediation and good offices.

He also asked the international community to support the efforts of UN Special Envoy for Syria Staffan de Mistura to maintain the hard-won momentum for the political solution to the Syrian issue.

On Thursday, the United States launched 59 Tomahawk cruise missiles at the Shairat military base in central Syria as its response to an alleged chemical attack on Tuesday in the rebel-held town of Khan Sheikhoun in the country's northwestern province of Idlib.

The United States believed that Syrian planes based at the Shairat airbase carried out the chemical attack which killed over 80 people and wounded scores of others.

The Syrian government denied the accusation. It explained that its air strikes hit an arms depot containing toxic gas and blamed the rebels for storing such chemical materials.