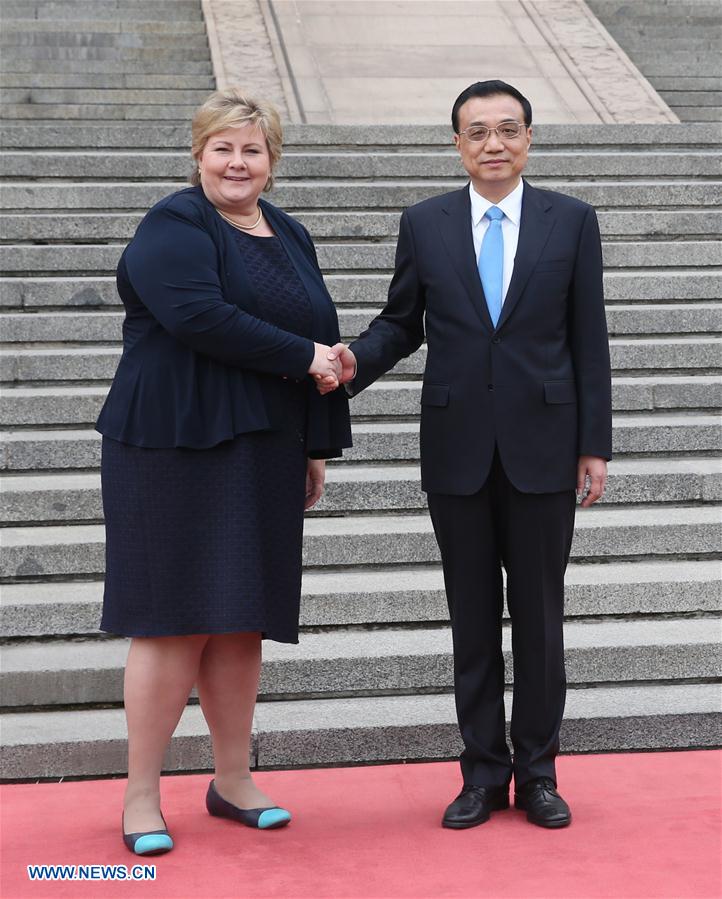 Chinese Premier Li Keqiang and Solberg held talks and witnessed the signing of cooperation documents ranging from the resumption of a free trade agreement negotiations, and science and technology, to sports and health.

Solberg's visit is the first by a Norwegian prime minister since bilateral ties deteriorated after the Oslo-based Nobel Committee conferred the 2010 Nobel Peace Prize on convicted Chinese criminal Liu Xiaobo. Liu was sentenced to 11 years in jail on Dec. 25, 2009, after a court in Beijing convicted him of engaging in activities designed to overthrow the government.

Receiving Solberg at the Great Hall of the People, Li said that China-Norway relations had got back on track, which deserved to be treasured by both sides.

Li called on Norway to adhere to the one-China principle and work with China in the spirit of mutual respect, treat each other on an equal footing, and respect each other's core interests and major concerns to enhance political trust to reboot the relationship.

"China is pushing forward a new round of opening-up to make the country a most attractive investment destination. China welcomes Norwegian enterprises and sovereign wealth funds to expand investment in China for win-win outcomes," the Chinese premier said.

Li said that China and Norway would champion multilateralism and were committed to pursuing an open global economy and free trade as well as international cooperation to tackle climate change and sustainable development.

Solberg said Norway would follow the guideline of a joint statement on the normalization of bilateral ties, uphold the one-China policy, respect China's core interests and major concerns, and enhance political trust with China.