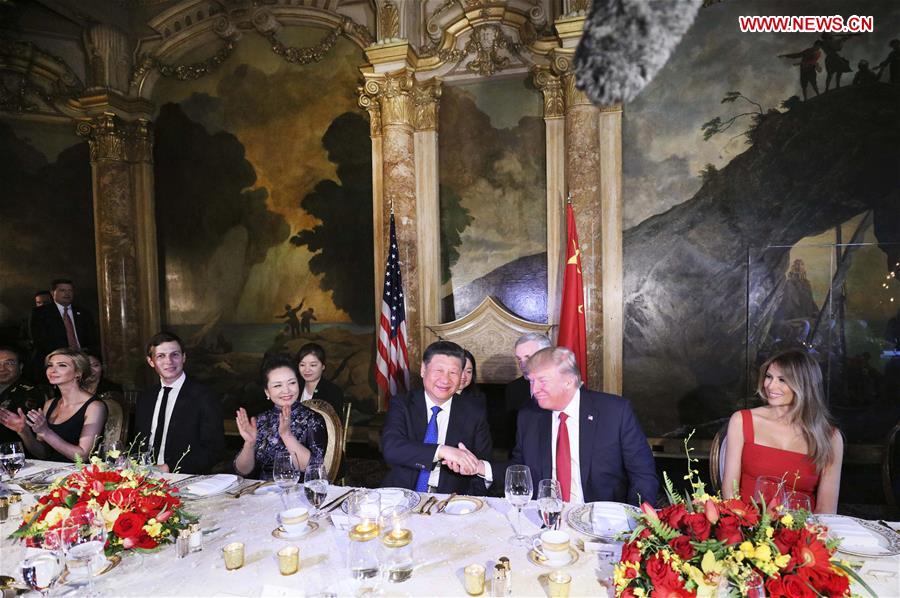 Addressing a welcome banquet hosted by U.S. President Donald Trump and his wife Melania, Xi said he and Trump held good talks earlier in the afternoon, reaching important consensus for the development of China-U.S. ties.

The two countries are willing to expand cooperation in trade and investment, diplomacy and security, law enforcement and cyber security, cultural and people-to-people exchanges on the basis of mutual respect and benefit, said Xi.

He also urged the two countries to manage differences and address sensitive issues in a constructive way.

During the speech, Xi expressed his readiness to lead, together with President Trump, people who have good wishes and passion to upgrade China-U.S. relations.

Trump congratulated Xi on his achievements in leading China's development, and the international respect Xi earned in the process.

Trump said he had a good discussion with Xi in their first meeting, exchanged opinions on a wide array of topics, and established a warm personal rapport.

Xi arrived in the southeastern U.S. coastal town of Palm Beach on Thursday afternoon, starting his first meeting with Trump in a bid to push forward China-U.S. relations from a new starting point.

The two leaders exchanged in-depth views with each other on major global and regional issues of common concern. They are to further their discussion on Friday.