Xi arrives in U.S. for first meeting with Trump 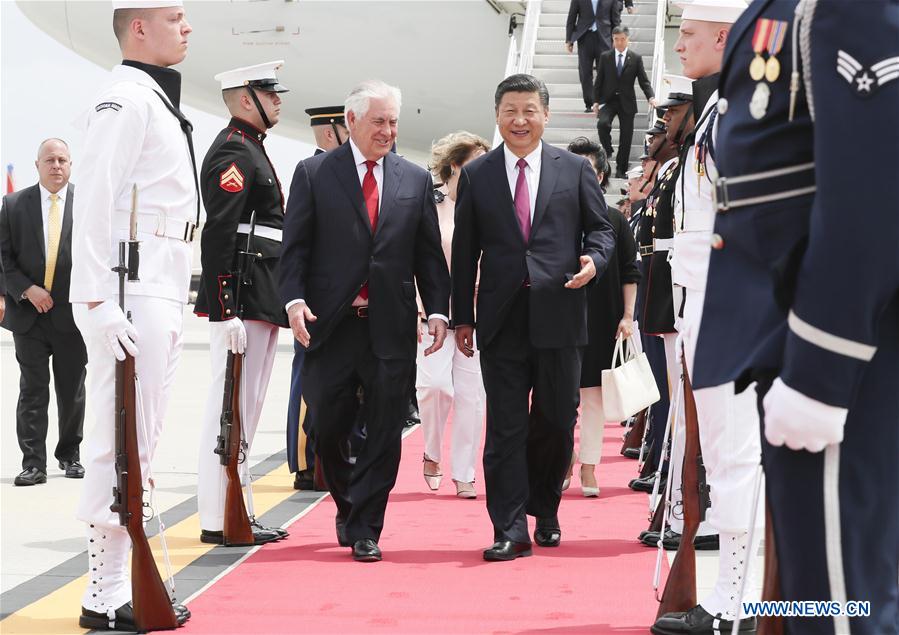 Chinese President Xi Jinping and his wife Peng Liyuan are welcomed by U.S. Secretary of State Rex Tillerson and his wife upon their arrival at Palm Beach International Airport in Florida, the United States, April 6, 2017. Xi arrived here for the first meeting with U.S. President Donald Trump. (Xinhua/Lan Hongguang)

PALM BEACH, United States, April 6 (Xinhua) -- Chinese President Xi Jinping arrived in this southeastern U.S. coastal town on Thursday for the first meeting with his U.S. counterpart, Donald Trump, in a bid to chart the course of bilateral ties in a new era.

In cloudy sunshine, the plane carrying the Chinese president, First Lady Peng Liyuan and other members of the delegation landed in the early afternoon at Palm Beach International Airport.

Under the gaze of an enthused welcoming crowd, including U.S. Secretary of State Rex Tillerson and his wife, Xi and Peng stepped out of the hatch and waved before they walked down the ramp hand in hand.

During his two-day stay in the Sunshine State of Florida, Xi is scheduled to hold talks with Trump in the Mar-a-Lago resort, which Trump calls "the Southern White House," to exchange views on bilateral ties and major regional and global issues of common concern.

Under the current international circumstances, "the meeting will be of great significance to charting China-U.S. relationship in a new era, advancing the development of bilateral ties in a healthy and stable way from a new starting point, and promoting peace, stability and prosperity in the Asia-Pacific region and the world at large," Zheng said.

Also late last month, White House Press Secretary Sean Spicer said at a press briefing that Trump sees the meeting as an opportunity for him "to develop a relationship in person with President Xi."

The U.S. president, he added, "looks forward to meeting with President Xi and exchanging views on each other's respective priorities, and to chart a way forward on a bilateral relationship between our two nations."

Prior to the trip, the two sides, respectively the world's largest developed and developing country, have maintained close communication at various levels and reached important consensuses.

In a telephone conversation in February, the two heads of state, who have maintained contact through phone calls and letters, agreed to build a constructive China-U.S. relationship and step up cooperation. In addition, Trump reversed his earlier stance and pledged to honor the one China policy, the political bedrock of bilateral ties.

Senior officials of the two countries have also exchanged visits to prepare for the presidential meeting. While visiting Beijing last month, Tillerson vowed to develop bilateral relations on the basis of non-conflict, non-confrontation, mutual respect and win-win cooperation, a principle Beijing has championed to describe its vision for China-U.S. ties.

Since establishing diplomatic relations in 1979, the two countries have witnessed twists and turns in their relationship, but have nonetheless become highly interdependent with their interests getting increasingly intertwined.

Meanwhile, economic cooperation with China has been vital to job creation in the United States, the U.S.-China Business Council said in a report in January. Bilateral trade and investment supported some 2.6 million jobs in the United States across a range of industries in 2015, while Chinese products also help lower costs for U.S. consumers.

Although they still have many differences and frictions, with trade and currency among the major thorny issues, the two sides have sought to properly manage them and expand common ground, as the world craves a healthy relationship between the two countries.

Noting that the first Xi-Trump meeting takes place just two and a half months after Trump assumed office, Robert Hormats, vice chairman of Kissinger Associates, an international consulting firm based in New York City, said such an early tete-a-tete will not only benefit both countries, but also serve "multilateral interests."

A successful presidential meeting will publicly convey a message that the two countries are not caught in an "adversarial relationship" and will work together to solve problems through "constructive dialogue," he added.

Joseph Nye, a renowned U.S. foreign policy expert, told Xinhua in an email interview that he is optimistic about China-U.S. relations for the long term.

"The U.S. and China will both compete and cooperate, but they have more gain from the cooperation dimension of the relationship," he said.