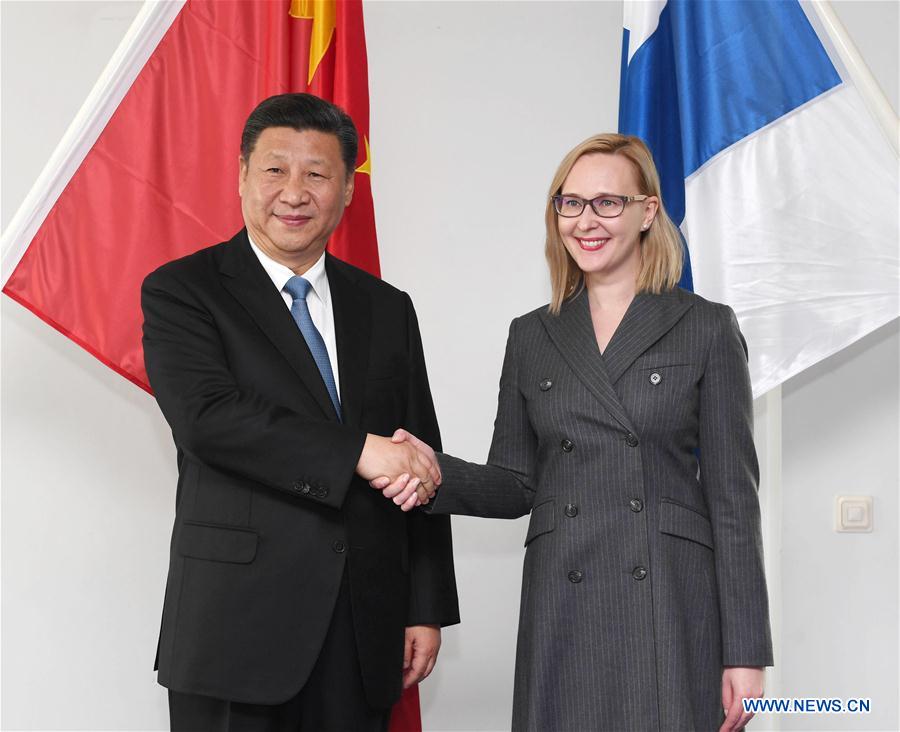 HELSINKI, April 5 (Xinhua) -- Visiting Chinese President Xi Jinping on Wednesday called on Chinese and Finnish legislatures to maintain exchanges at various levels, so as to deepen the understanding between the two countries' lawmakers.

The cooperation between legislatures has played an important role in China-Finland relations, Xi said when meeting with Speaker of the Finnish Parliament Maria Lohela.

The Finnish parliament is one of the first western parliaments to carry out friendly exchanges with the National People's Congress (NPC) of China, Xi stressed, adding that he appreciates the part played by Lohela in actively promoting the cooperation between the two legislatures.

China supports the Chinese and Finnish legislatures to optimize existing cooperation mechanisms so as to make contributions to consolidating social and public foundations of bilateral relations, he said.

On bilateral relations, the Chinese president said Finland was one of the first western countries to establish diplomatic ties and conduct cooperation with China.

The Chinese side attaches great importance to the development of China-Finland relations and is ready to join hands with the Finnish side to push bilateral relations to higher levels to benefit the two peoples, he added.

Xi called on China and Finland to promote local communication and practical cooperation to enhance the friendship between the two peoples.

For her part, Lohela said the Finnish side admires the achievements made by China in economic and social development.

Finland sees China's development as its opportunity and is ready to intensify communication and cooperation with China in such areas as economy and trade, culture, winter sports and global affairs, she added.

The friendly exchanges between the Finnish and Chinese legislatures in the past 60 years or so have made positive contributions to the development of bilateral relations, she said.

The Finnish parliament is willing to deepen interactions with the NPC of China and boost exchanges between the two countries' young lawmakers in particular, Lohela added.