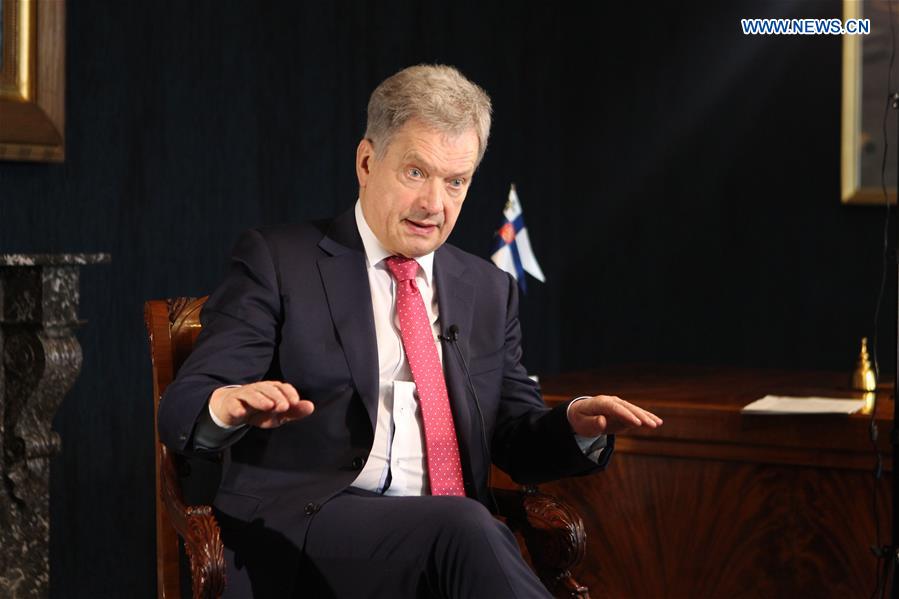 Niinisto has established his personal relationships with Xi during their meetings since 2013, when he visited China and reached an agreement with Xi to develop a future-oriented new type of partnership between the two countries.

"I am sure my friendship with President Xi will deepen. More importantly, we can find common views on how to further develop China-Finland relations as well as China-EU relations, and find solutions to myriad problems and headaches of the mankind," Niinisto told Xinhua in an exclusive interview ahead of Xi's tour to the nordic country.

The year of 2017 marks the centenary of Finland's independence. Niinisto said it is "a great honor to receive President Xi this year, and the visit shows respect for our anniversary."

Finland was one of the first Western nations which have established diplomatic ties with China. Niinisto appreciated the strategic partnership forged between the two nations since 2013, noting it has "advanced very well."

"Although Finland and China are distinctively different in size, we have a lot in common. For example, both governments are devoted to improving their people's livelihood," said the Finnish president.

China has been Finland's biggest trade partner in Asia, and China's investment in Finland has increased significantly over the past few years. Hailing these as "positive trends," Niinisto said the bilateral trade is "increasing all the time."

As a country proud of its innovation tradition, Finland is now more concentrated on clean technology, information and communication technology, as well as solutions to problems of urbanization, in which the two nations can strengthen cooperation, according to Niinisto.

"The mankind is faced with many serious problems, such as a more worrying environment, migration in huge numbers and climate change which has made living conditions rather difficult in some areas," he said.

"It is very significant for everyone in the world to understand that we share a common destiny," Niinisto said, referring to the Xi-proposed concept of building "a community of common destiny for mankind."

As a member since 1995, Finland has been a strong believer of the European Union (EU) and a steadfast supporter of integration, even though the EU is facing great difficulties after Brexit and general elections in some member countries, said Niinisto.

"Maybe it's time for the EU to concentrate on the most important issues and that is why we build up integration," he said, trying to remind European nations that the EU was founded for peace, common security and prosperity for Europe.

Niinisto said China has obviously been a "supporter of European integration," and there is still room for strengthening the China-EU cooperation.

China's Belt and Road Initiative is of great significance in promoting global connectivity, Niinisto said. "The more we are connected to each other, the better we understand each other."

"The initiative will also help promote economic growth of the EU, by boosting connections within the organization and economic links between the EU and other countries," he added.