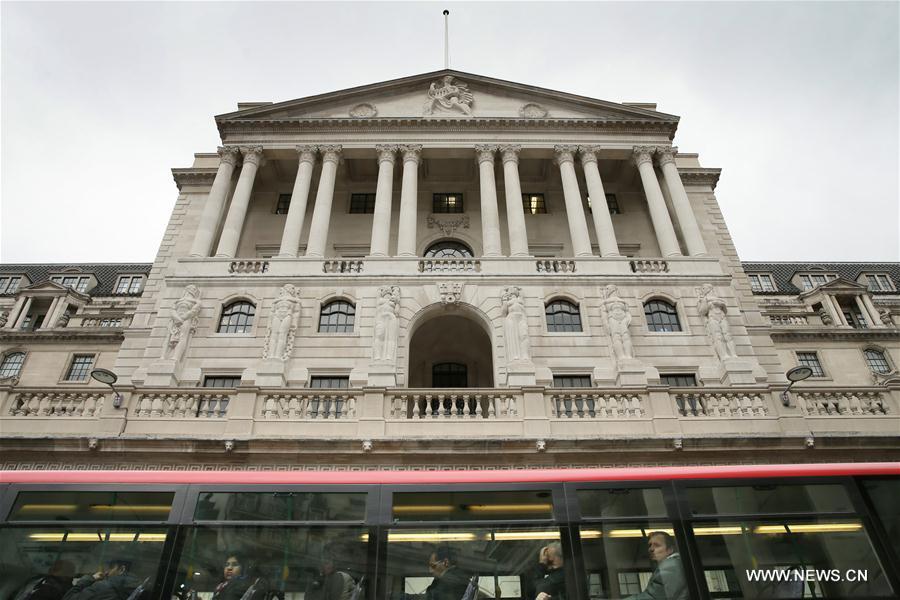 A bus drives past the Bank of England after the British government triggered Article 50 of the Lisbon Treaty, in London, Britain on March 29, 2017. The Britain on Wednesday officially started the historic process to leave the European Union (EU) as the letter signed by Prime Minister Theresa May is sent to leaders of the bloc. (Xinhua/Tim Ireland)

LONDON, March 29 (Xinhua) -- Wednesday will be remembered as the starting point for Brexit, when the decision by more than 17 million British people to leave the European Union (EU) became a reality.

London and Brussels became the focal points in a day of high political drama on the English Channel of both sides.

On Wednesday afternoon, in the Brussels headquarters of the European Union, British Ambassador to the EU Tim Barrow handed a letter to Donald Tusk, president of the European Council.

The 6-page letter, signed by British Prime Minister Theresa May, officially kick-started a two-year period of negotiations for a new working relationship between London and Brussels.

"That decision was no rejection of the values we share as fellow Europeans," the letter reads. "The UK wants the EU to succeed and prosper."

Minutes later, 320-km away in the British Houses of Parliament, May stood up in a packed House of Commons to announce that Brexit had been triggered.

It is "an historic moment from which there can be no turning back," May, in a black suit, said in a resolute voice. "We will be after a bold and ambitious free trade agreement with the EU."

The historic move came 44 years after Britain first joined the EU, and just nine months after a national referendum in Britain in which 52 percent of voters chose Brexit.

May told the MPs that Britain aims to deliver a smooth and orderly Brexit. Aware of the way the country has been left divided by Brexit, May made a plea to the British people to unite.

One commentator remarked: "If the result of the referendum was an earthquake, the triggering of article 50 was an aftershock."

Northern Ireland also wanted to remain in the EU and the result has left a question mark over the future border with the Irish Republic.

Londoners voted remain along with a number of major English cities, but the majority of voters in England backed leaving.

May in her speech vowed to represent "every person in the whole United Kingdom."

It is a day of celebration for some and disappointment for others.

President of the European Commission Jean-Claude Juncker has said he is "deeply sad" at Britain beginning the process of its departure from the EU.

Tusk, who received May's letter, said in Brussels: "We already miss the UK."

He said his goal is an ordinary withdrawal and that he will circulate draft guidelines for the EU's negotiating stance on Friday.

The dust will take a while to settle as the Brexit debate continues, with little sign that May's plea for unity had been heeded.

Pro-remain organizations and individuals continued to fight their corner. Outside the British Parliament, dozens of protesters against Breixt were waving signs, shouting slogans and singing "Ode to Joy," the anthem of both the Council of Europe and the European Union.

In London, where nearly 300 international banks have branches, a sense of uncertainty could be easily felt.

Cremeut Labit, a French national working in the financial quartet of London, told Xinhua he felt regretful about Brexit. "There is going to be a period of uncertainty," he said. "We need to be cautious before taking every step."

Jonathan Warburton, a London-based banker working for a French bank who takes the Eurostar every other week, thinks Brexit will not affect his travel unduly. "The bank might shift about 5 percent of its staff over, but London is the hub, and where the talent is," he told Xinhua.

Musician Lewis Fieldhouse, 28, born in the year the Berlin Wall fell, said: "I have never feared boots on the ground like earlier generations, so I regret us leaving."

A new UK-Europe relationship is expected to emerge after the Brexit negotiations which are doomed to be lengthy and tough.

Observers have predicted that Britain and Europe will differ on a wide range of issues, including immigration control, free-trade agreement and a multi-billion-pound exit fee.

The full effects of Brexit on Britain's trade relations may not be resolved in a further two decades, British economist and writer Martin Wolf told Xinhua.

In an assessment of the complex road ahead for Britain as it creates new economic and trade ties, Wolf warned that exit from the EU was merely the first step on the journey.

"We will be making up a new trade policy which will probably take us 20 years," said Wolf, who is the associate editor of the London-based daily newspaper the Financial Times and also its chief economics commentator.

Matthew Elliott, one of the leading forces behind the successful Brexit campaign told Xinhua in a recent interview: "Brexit means leaving the single market and leaving the customs union," which he described as "a full one."