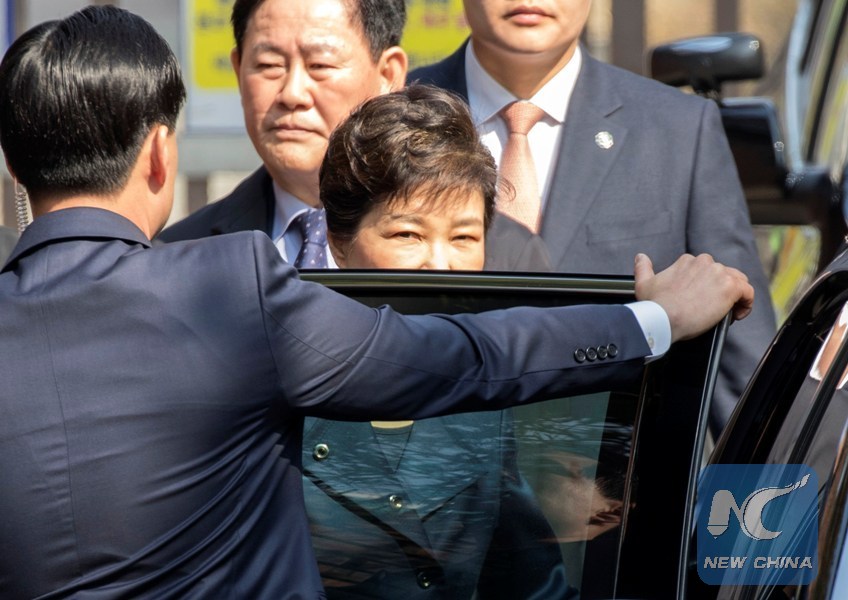 Former South Korean President Park Geun-hye (C) gets into a car to leave her private residence for a court hearing in Seoul March 30, 2017. (Xinhua/Lee Sang-ho)

SEOUL, March 30 (Xinhua) -- Former South Korean President Park Geun-hye on Thursday appeared in a court that will decide whether to issue an arrest warrant for her over a corruption scandal that led to her impeachment.

Park, dressed in a dark blue coat, got into a black sedan at her private residence in an upscale southern district of Seoul at about 10:09 a.m. local time (0109GMT), TV footage showed.

Scores of supporters, mostly elderly voters, waved national flags outside Park's home, chanting their opposition to her arrest. Some lawmakers of the former ruling party and former presidential secretaries saw her off.

Park reportedly said sorry to the visiting former secretaries and pro-Park legislators, while waving her hand inside the limousine to her supporters. Park's brother and sister-in-law visited her home before she left for the court.

The limousine arrived at the Seoul Central District Court around 11 minutes later. The motorcade was escorted by security cars and police motorcycles.

The grim-faced Park left no remarks, passing through a sea of journalists waiting for the first South Korean former president who attends the court hearing to decide the issuance of an arrest warrant.

Former military presidents Chun Doo-hwan and Roh Tae-woo were arrested for treason and corruption charges in 1995, but their arrest warrants were directly issued by prosecutors. Since 1997, a court judge has issued an arrest warrant.

If the warrant is approved, Park would become the third South Korean former president to be taken into custody. The decision is forecast to be made late Thursday or early Friday.

Park appeared on TV just nine days after being grilled in the Seoul Central District Prosecutors' Office next to the Seoul court. The warrant to arrest Park was sought by prosecutors earlier this week.

In the warrant, prosecutors said there was a possibility of her destroying evidence as she denied most of charges levied at her. Before the grilling, Park said she would sincerely face a criminal scrutiny, apologizing to the public.

The special investigation headquarters, tasked with the probe into the corruption scandal embroiling Park, said in the warrant that there was also a possibility for Park to flee.

A total of 13 charges were levied by prosecutors against Park, including bribery, abuse of authority, extortion and the disclosure of confidential documents.

If convicted of bribery, Park would be sentenced to at least 10 years in prison. Prosecutors usually see the danger of fleeing when the expected prison sentence surpasses 10 years.

Park is accused of colluding with her decades-long friend Choi Soon-sil, who is now in custody, to receive tens of millions of U.S. dollars in bribes from Samsung Electronics Vice Chairman Lee Jae-yong who is also arrested.

The bribes were offered in return for getting assistance in the transfer of management control of Samsung Group to Vice Chairman Lee from his ailing father Chairman Lee Kun-hee.

The younger Lee, an heir apparent of the country's biggest family-controlled conglomerate, has effectively taken the helm of Samsung since Chairman Lee was hospitalized for heart attack about three years ago.

Choi is charged with extorting tens of millions of dollars from scores of conglomerates to establish two nonprofit foundations she used for personal gains. Prosecutors already branded Park and Choi as criminal accomplices.

Choi, at the center of the influence-peddling scandal, is also suspected of receiving secret government documents from one of Park's former secretaries on a regular basis to meddle in state affairs from the shadows.

Some expected Park's arrest to have an influence on the upcoming presidential election to succeed her. Park was removed from office on March 10 as the constitutional court upheld a motion to impeach her, which was passed in the parliament in December last year.

As the country's president was formally unseated, the presidential election was scheduled for May 9. Primaries of major political parties are underway.

Support for former ruling party, which recently changed its name into the Liberty Korea Party, fell with a downfall of Park over the influence-peddling scandal, bolstering popularity for major presidential contenders of opposition parties.

However, if Park appears on TV dressed in prison uniform and handcuffed after the court's approval to arrest her, conservative voters may be united to support conservative presidential candidates out of a pity for the disgraced leader.

According to a recent survey, over 70 percent of South Koreans favored Park's arrest, indicating no effect on the upcoming presidential election despite the court's decision to take Park into custody.