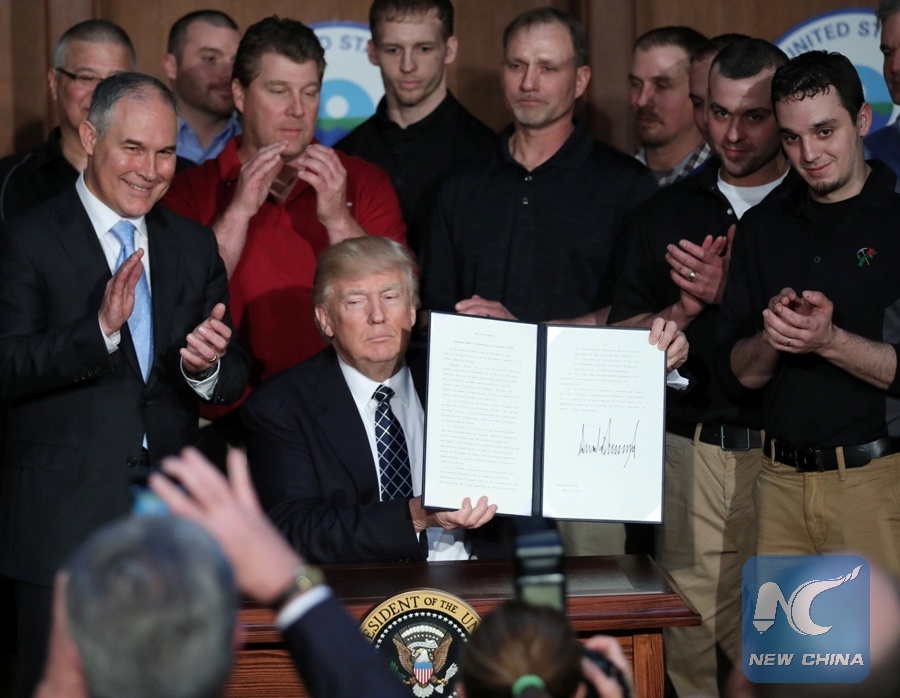 Trump, who once called climate change a "hoax," signed the Energy Independence Executive Order, during his first visit to the U.S. Environmental Protection Agency (EPA), which would see a 31 percent reduction in funding and 3,200 jobs cut under Trump's 2018 fiscal year budget request.

Flanked by coal miners invited to attend the signing, the president hailed the order as "the start of a new era" in American energy production that he said would put an end to the "war on coal."

"With today's executive action, I am taking historic steps to lift the restrictions on American energy, to reverse government intrusion and to cancel job-killing regulations," Trump said.

It will "allow our companies and our workers to thrive, compete, and succeed on a level playing field for the first time in a long time," he said.

The main target of the order is the so-called Clean Power Plan, a signature effort by Obama to reduce greenhouse gas emissions from coal-fired power plants in keeping with promises of the 2015 landmark global climate deal known as Paris Agreement.

The order directed the EPA to "suspend, revise, or rescind" actions related to the Obama-era rule, which it said "would stifle the American energy industry" but actually has been put on hold by the U.S. Supreme Court in February 2016.

The decree also lifted a ban on coal leasing on public lands and restrictions on the production of oil, natural gas, and shale energy, disbanded an interagency working group on the social cost of greenhouse gases, and revoked Obama's memorandums such as the one that addressed climate change and national security.

In addition, it directed all agencies to conduct a review of existing actions that "harm domestic energy production and suspend, revise, or rescind actions that are not mandated by law."

Trump has threatened to pull the U.S. out of the Paris Agreement during his presidential campaign, but the order did not address this issue.

"In terms of the Paris agreement, whether we stay in or not is still under discussion," a senior White House official told reporters during a background briefing.

When further asked how to describe the fight against climate change, the official said: "I think it's an issue that deserves attention, but, again, I think the president has been very clear that he's not going to pursue climate or environmental policies that put the U.S. economy at risk. It's very simple."

Trump's move came one day after a Gallup poll showed that the share of the U.S. population concerned about climate change has reached a new high of 50 percent.

The number is up slightly from 47 percent in 2016 but a whopping 13 percentage points above the 37 percent recorded only two years ago, according to Gallup.

Some energy companies are celebrating the executive order as a step forward in advancing the U.S. energy renaissance.

"We look forward to working with the Trump administration and Congress on forward-looking energy policies that will help ensure the United States continues leading the world in the production and refining of oil and natural gas, and in the reduction of carbon emissions," American Petroleum Institute president and CEO Jack Gerard said in a statement.

Gina McCarthy, who served as EPA chief under Obama, however, said the order wants "us to travel back to when smokestacks damaged our health and polluted our air, instead of taking every opportunity to support clean jobs of the future."

"This is not just dangerous," McCarthy said in a statement. "It's embarrassing to us and our businesses on a global scale to be dismissing opportunities for new technologies, economic growth, and U.S. leadership."

Michael Brune, executive director of Sierra Club, a U.S. environmental organization, described Trump's order as "the single biggest attack on climate action in U.S. history" and vowed to fight it "in the courts, in the streets, and at the state and local level across America to protect the health of every community."

"If anything it may slow employment growth and economic development as one of the fastest growing sectors in the U.S. is the clean energy sector."