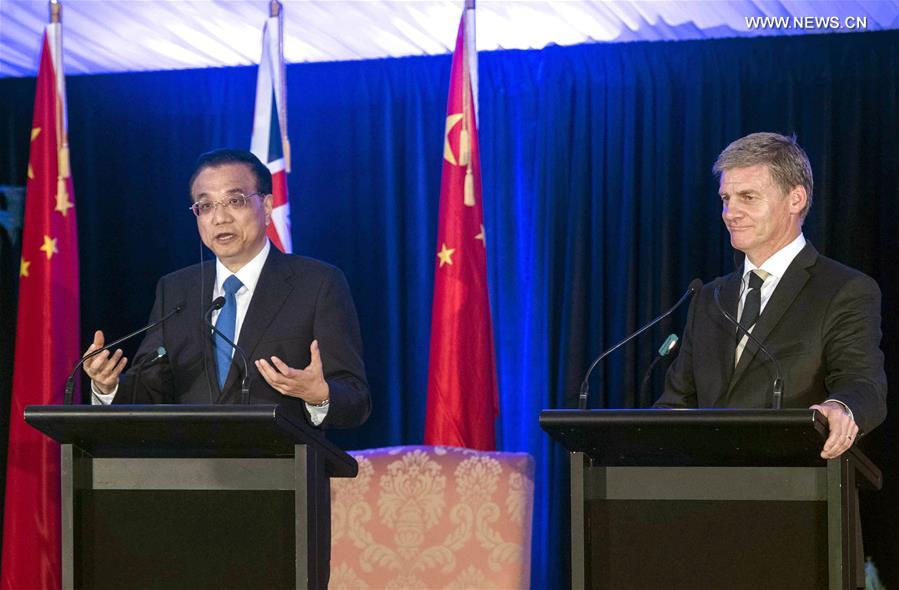 At a joint press conference after talks with New Zealand Prime Minister Bill English on Monday, Li said upgrading the FTA, which took effect in 2008, will promote the development of bilateral economic and trade ties and better benefit the two peoples.

Negotiations will touch on investment, service trade, quarantine of animals and plants, the Principle of Original Production Place, economy and technology, e-commerce, and competition policies, according to Chinese Ambassador to New Zealand Wang Lutong.

"The China-New Zealand FTA is one of the highest-standard signed between China and developed countries. The two countries have established long-term good trade relations, with bilateral trade growth outpacing our economic growth," Li said.

Li also called on the two countries to jointly protect open economy and free trade as well as regional stability and global peace.

As one third of New Zealand's dairy products are exported to China, English said the dairy products and any other products going to China will be of the quality Chinese consumers would expect to be.

Under the FTA, a wide range of products, typically health-related products, are much sought after by Chinese consumers, English said, adding that New Zealand will work with the Chinese authorities in food safety to ensure that all the New Zealand products exported to China meet the standards required.

China and New Zealand signed a series of cooperation documents on Monday, including an action plan for cooperation on climate change, granting new access for New Zealand chilled beef and meat to go on the Chinese market and deepening cooperation on the Belt and Road Initiative.

In the press conference, the Chinese premier also dismissed the speculation that China is dumping steel products to New Zealand, saying that China consumes 90 percent of its steel products at home while exporting only 10 percent of the total and has scaled back outdated and excessive production capacity.

The steel imported from China accounts for a tiny share for New Zealand's total imports and China is in large trade deficit to the Oceanic country in some sectors, Li said. "But we never think either China or New Zealand dumps to the other."

Li said China and New Zealand should view the issue from the perspective of free trade, work to resolve differences through rational and prudent dialogue and keep a sound and stable development of bilateral economic ties.

Trade deficit can only be solved through opening up while closing doors will result in more trade imbalances, he added.

During talks with English, Li called on the two countries to enhance cooperation within the framework of the Asian Infrastructure Investment Bank and accelerate the Regional Comprehensive Economic Partnership talks to contribute to the Asia-Pacific and world economic growth.

English said he supports the one-China policy and the Belt and Road Initiative and welcomes more Chinese investment in New Zealand. New Zealand hopes to further promote bilateral cooperation in trade, science, judicial affairs and other areas, he added.

While meeting with New Zealand opposition Labor Party leader Andrew Little later Monday, Li expressed the willingness to work with the ruling and opposition parties to advance the negotiation of upgrading the FTA, expand two-way opening-up in trade and investment and provide more business-friendly environment.

Little lauded China's important role in promoting free trade and enhancing international cooperation, saying that the negotiation to upgrade the FTA will create more opportunities and fruits of mutual benefits.

Li arrived in Wellington on Sunday for an official visit to New Zealand after wrapping up his Australia tour.

The Belt and Road Initiative, which comprises the Silk Road Economic Belt and the 21st Century Maritime Silk Road, was brought up by Chinese President Xi Jinping in 2013, with the aim of building a trade and infrastructure network connecting Asia with Europe and Africa along the ancient Silk Road routes.