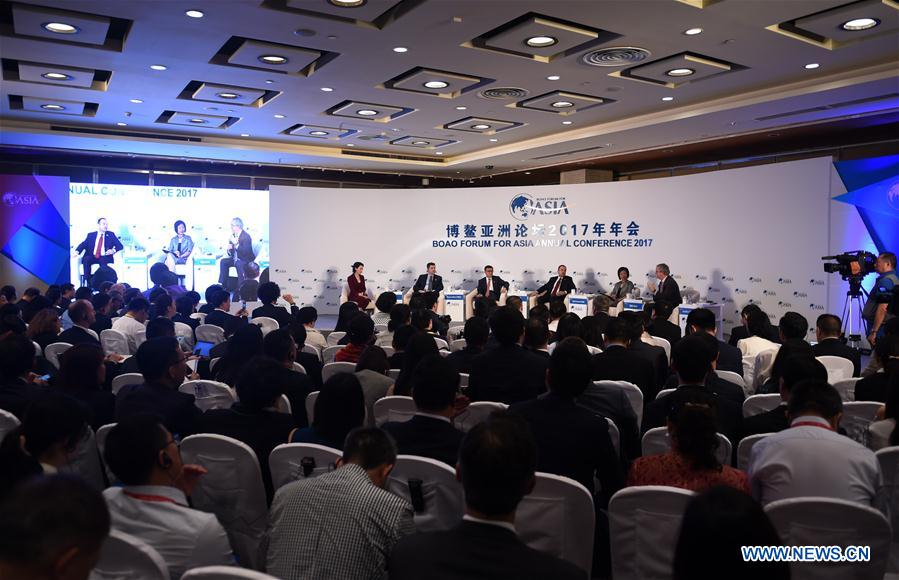 The session "The Belt and Road: Dialogue with Leaders" is held during the Boao Forum For Asia Annual Conference 2017 in Boao, south China's Hainan Province, March 25, 2017. (Xinhua/Yang Guanyu)

BOAO, Hainan, March 26 (Xinhua) -- An initiative on economic globalization was announced at the end of the annual conference of the Boao Forum for Asia (BFA) on Sunday in Hainan Province.

The aim of the forum was to promote and deepen the economic exchange, coordination, and cooperation within Asia and between Asia and other parts of the world, according to the initiative.

Addressing pressures on global growth and the increase in de-globalization and protectionism, the initiative asked Asian countries to stay committed to open markets, inclusive growth and economic cooperation.

Rhetoric of de-globalization and protectionism are feared to disrupt global growth, which is under downward pressure, BFA Vice Chairman Zeng Peiyan said.

De-globalization could create challenges for global growth instead of solve the underlying structural problems wrongly attributed to economic globalization, he added.

The initiative called upon the world to actively adapt to the forces of economic globalization and reform global governance to solve problems arising amid globalization.

Specific measures were proposed by BFA members through the initiative.

Protectionism has to be rejected. Trade and investment should be promoted to drive sustainable global development, with continued reform of multilateral mechanisms and governance.

International and regional organizations such as the WTO and APEC should work towards a more open, inclusive, fair and equitable bilateral and multilateral trade system.

Multilateral lenders, including the IMF and World Bank, were urged to improve supervision of global finance, supporting cross-border capital flows and working to lessen impacts on the real economy.P Innovation was highlighted in the initiative. Governments should use cross-border public private partnerships, a financing mode, to facilitate technological innovation and cross-border movement of knowledge and information.

BFA members proposed an open mechanism for multilateral cooperation to ensure balance in globalization, calling for efforts from the G20, the APEC, governments and the private sector. Infrastructure and institutional and people-to-people connectivity should also be promoted.

Zeng stressed Asia has always been a participant, beneficiary, and constructor of globalization.

He hoped that proposals such as Regional Comprehensive Economic Partnership, the Belt and Road Initiative and Free Trade Area of the Asia-Pacific will further promote economic globalization.