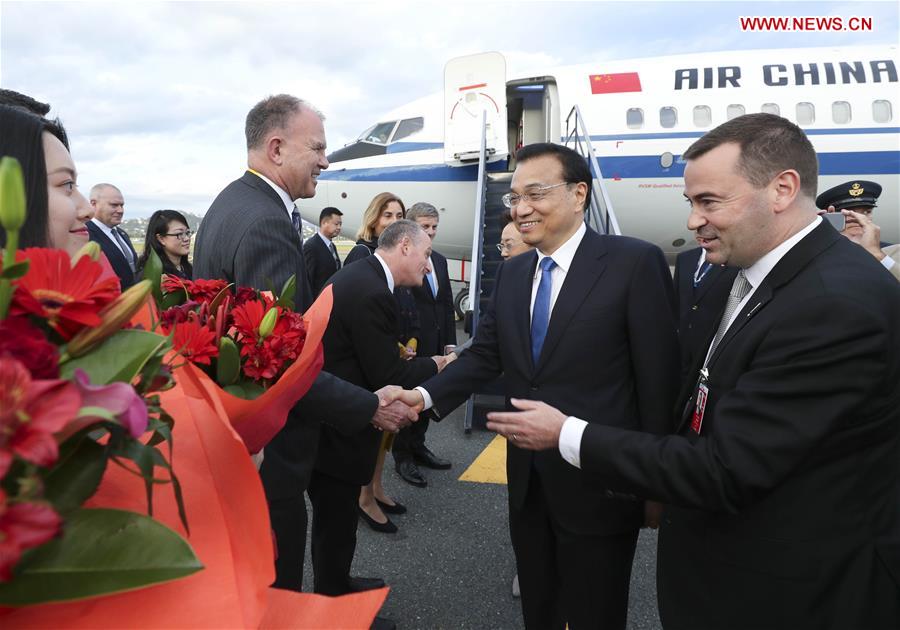 WELLINGTON, March 26 (Xinhua) -- Chinese Premier Li Keqiang arrived here on Sunday for an official visit to New Zealand, the first to the Oceanian country since he took office as Chinese premier in 2013.

Li, accompanied by his wife Cheng Hong, arrived in Wellington as the guest of his New Zealand counterpart, Bill English.

Li said he is very delighted to visit New Zealand on the occasion of the 45th anniversary of the establishment of the two countries' diplomatic ties, in a written statement upon his arrival.

For a long time, relations between the two countries, with substantial development, have been at the forefront among China's ties with developed countries, he said.

The premier said he expects to exchange in-depth views with the New Zealand side to enhance bilateral cooperation in various fields and strengthen friendship among the two peoples, so as to continuously promote the China-New Zealand ties to higher levels.

Noting the sluggish global economic recovery and the rising trend of anti-globalization and protectionism, the premier called on both sides to make joint efforts to send positive signals that China and New Zealand oppose protectionism and promote trade and investment liberalization.

Both China and New Zealand are advocates and implementers of free trade, Li said, adding that trade liberalization is not only in line with the two countries' common interests, but also beneficial to the stability, development and prosperity of the Asia-Pacific as well as the world.

During his four-day stay, Li is scheduled to hold talks with English and meet Governor-General Patsy Reddy and other officials. He will witness the signing of a number of bilateral cooperation documents in the capital.

Li will also pay a visit to Auckland, the largest city of the country, for a number of business and culture exchange activities.

For his part, English expressed hopes for closer ties and cooperation between the two countries.

"The visit is an important opportunity to set the agenda for the next stage of our strong relationship and demonstrates our shared commitment to open trade and economic growth," English said in a statement.

Bilateral trade between China and New Zealand has increased nearly threefold compared with 2008, when the two countries reached a free trade agreement. The first round of negotiations on upgrading the deal will be held in the first half of this year.

The upgrading will bring more opportunities for bilateral economic cooperation, and push the two sides to increase market openness and reach consensus on such areas as services, trade and e-commerce, Zheng said.

It is the second and final leg of Li's trip to Oceania. He was in Australia for a five-day visit during March 22-26.