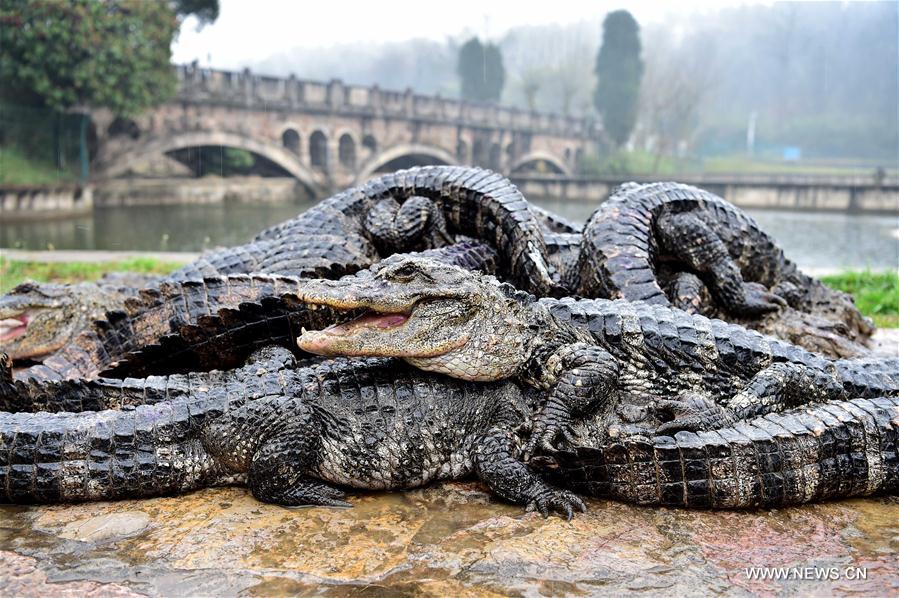 HEFEI, March 19 (Xinhua) -- More than 13,000 Chinese alligators have ended dormancy and were moved out of hothouses in east China's Anhui Province.

"Chinese alligators hibernate in the winter. We usually move them out of houses in March when the temperature is above 16 Celsius degrees," said workers at Anhui Yangtze Alligator Reserve in Xuancheng City.

Wild Chinese alligators often go through the hibernation in a cave in winter, while alligators bred in captivity spend the period indoors.

Every Chinese alligator needs to do physical examination and only healthy and strong ones are allowed to get outside, the reserve said.

"The alligators are still in the semi-dormancy period and can not eat or drink right after they were move out. They live on their saved energy," said workers at the reserve. "They will not start to eat until April when the temperature rises above 25 Celsius degrees. We will feed them some mussels and snails to practice their hunting skills."

Anhui Yangtze Alligator Reserve is the only artificial breeding base for Chinese alligators worldwide. It has 13,000 captive alligators.

To increase the number of wild alligators, the reserve has released batches of the reptiles to their natural habitat since 2003.

Research shows they have generally adapted well and have begun to reproduce. There are about 130 to 150 in the wild.

China listed the Chinese alligator as a first-class protected animal in 1972.