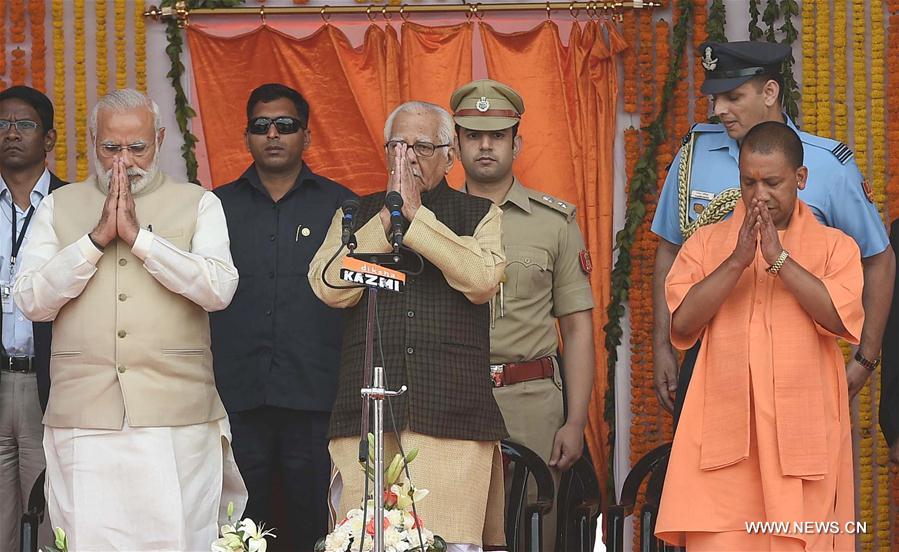 NEW DELHI, March 19 (Xinhua) -- A controversial Hindu saint and a five-time parliamentarian of the country's ruling Bharatiya Janata Party (BJP) was on Sunday sworn in as the Chief Minister of India's most populous and politically important state of Uttar Pradesh.

Along with him, two Deputy Chief Ministers -- Keshav Prasad Maurya, the saffron outfit's Uttar Pradesh chief, and Dinesh Sharma, Mayor of Lucknow -- also took oath. At least 41 other Ministers were also sworn in.

Yogi Adityanath name as the Chief Minister propped up only late Saturday evening, a week after the BJP swept the crucial assembly polls in the state, winning 312 out of 403 seats, by decimating regional parties like Samajwadi Party and the Bahujan Samaj Party.

After the 44-year-old's name was announced for the top post, the Hindu religious leader thanked Modi, who was the face of BJP's political campaign in Uttar Pradesh. "I will take the state forward with his motto of sabka saath sabka vikas (With All, Development For All)," he told the media.

But Yogi Adityanath is no stranger to controversies and his anti-Muslim rhetoric. He once said that minorities that oppose yoga (a form of exercise) should leave the country and once compared Bollywood actor Shah Rukh Khan with Pakistani terrorist leader, Hafiz Saeed.

The Hindu religious leader is also a strong supporter of laws protecting cows, considered as holy in the country. He recently hogged limelight for praising a travel ban ordered by U.S. President Donald Trump to block immigration from a group of Muslim-majority countries.

Uttar Pradesh has a population of 200 million people. And about a fifth are Muslims.