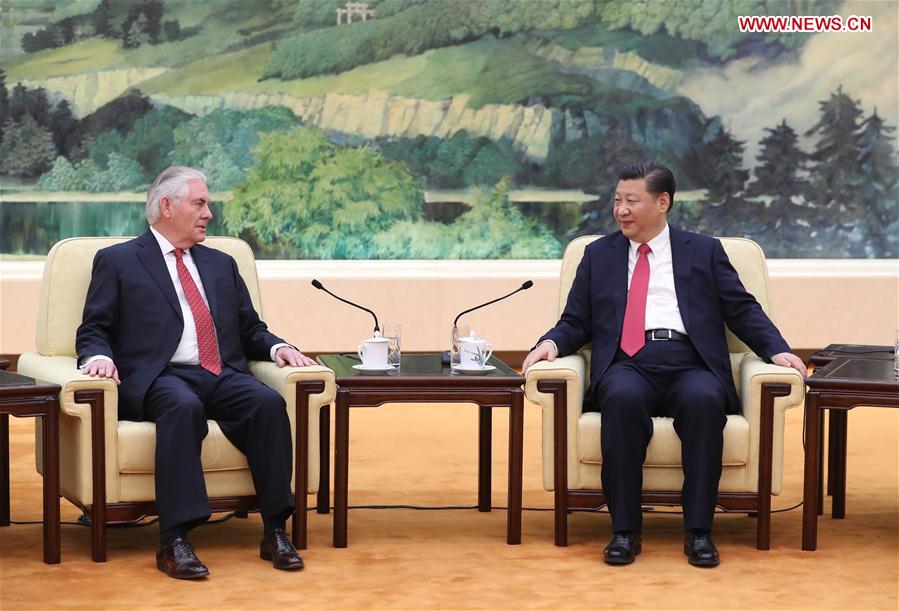 There are important development opportunities resulting from China-U.S. relations, said Xi during the meeting in the Great Hall of People in Beijing.

Xi said he had maintained sound communications with his U.S. counterpart Donald Trump through telephone calls and messages, and that they had agreed that the two countries could be good cooperative partners.

To advance China-U.S. ties in a healthy and steady manner, both sides, Xi expressed, could enhance exchanges at high level and various levels; expand cooperation in bilateral, regional and global fields; and properly address and manage sensitive issues.

The two sides should grasp the general direction for the development of China-U.S. relations in an attitude responsible for history and future generations, said Xi.

Xi also extended welcome to President Trump for a visit to China.

Tillerson said President Trump valued communication with President Xi, and looked forward to meeting Xi and the opportunity for a visit to China.

The U.S. side is ready to develop relations with China based on the principle of no conflict, no confrontation, mutual respect and win-win cooperation, said Tillerson.

China, U.S. in talks on meeting between presidents

BEIJING, March 18 (Xinhua) -- China and the United States are now in close communication on arrangements for a meeting between the two presidents and exchanges at other levels, Chinese Foreign Minister Wang Yi said during his talks with U.S. Secretary of State Rex Tillerson Saturday.

"We attach great importance to your visit," Wang told Tillerson at the Diaoyutai State Guesthouse in Beijing. Full story

BEIJING, March 18 (Xinhua) -- Never before has the China-U.S. relationship been so complicated to comprehend, and too important to fail.

Saturday marks Rex Tillerson's first visit to China as secretary of state. Many speculate that one of the top U.S. diplomat's missions in Beijing over the weekend is to communicate with the Chinese side over a possible meeting between the heads of state of the two countries in the coming weeks. Full story