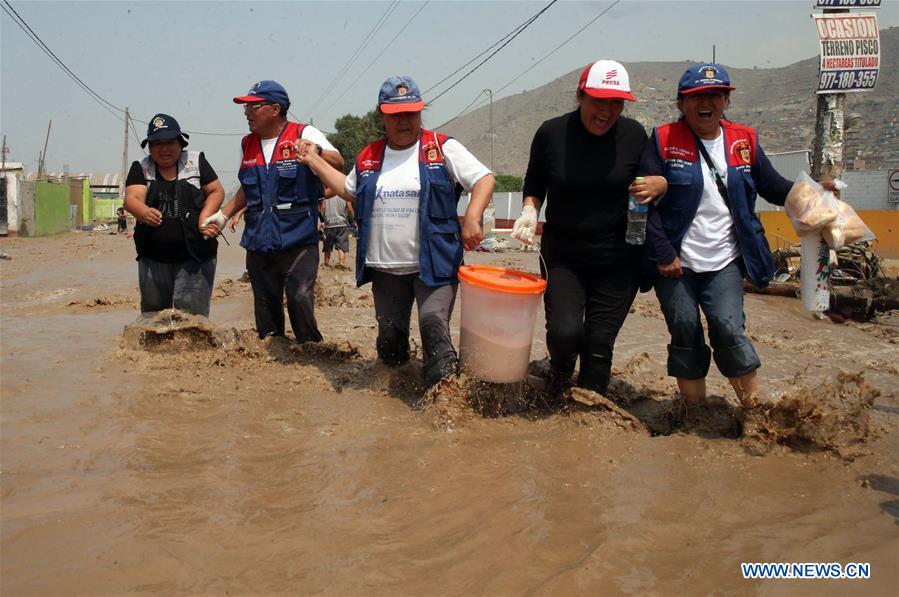 People wade through the water in a flooded area in Lima, Peru, on March 18, 2017. Peru is facing a critical situation due to the coastal El Nino phenomenon which has been battering the country with endless rainfall for weeks, causing severe social and economic consequences. (Xinhua/Vidal Tarqui/ANDINA)

LIMA, March 18 (Xinhua) -- Peru is facing a critical situation due to the coastal El Nino phenomenon which has been battering the country with endless rainfall for weeks, causing severe social and economic consequences.

While the government has not declared a national state of emergency yet, it has declared an emergency in some 800 districts in the northwestern regions of Tumbes, Piura, Lambayeque and La Libertad, the capital and in the southern provinces of Ica and Arequipa.

Torrential downpours, often accompanied by storms, have changed daily lives of many Peruvians. Hundreds of kilometers of roads have been cut off or blocked by flooding and landslides, while over 100 bridges have collapsed across the country.

Flooding has claimed at least 62 lives as of Thursday and left about 72,000 people homeless. Over 567,000 people have been affected and more than 119,000 buildings have been damaged.

On March 9, the Ministry of Economic and Finances of Peru launched an economic plan to bring GDP growth to over 4 percent in 2017, with a focus on public investment, jobs, housing, small- and medium-sized enterprises (SMEs), and mining.

However, it is predicted that El Ninos in Peru will cause losses amounting to between 150-500 million U.S. dollars, which is likely to have a negative impact on national growth rate this year.

According to the El Nino Phenomenon Operations Center, the coastal El Nino has led to the rise of the surface temperature of the Pacific by five degrees to an average of 20 degrees Celsius. This has heated up water to abnormal levels, triggering torrential rains and landslides.

The heavy rainfall have forced the government to issue a series of yellow and red alerts for various major rivers.

Some 10 million Peruvians living in Lima have been suffering from restrictions or cuts on their drinking water supply since Wednesday as intense rainfall has affected the city's La Atarjea water treatment plant.

SEDAPAL, Lima's drinking water utility, has been overwhelmed by the high turbidity of the water in the Rimac river. The water turbidity in the river is usually 10,000 Nephelometric Turbidity Units (NTU), which is relatively clear, but now the figure has shot up to 98,000 NTU after the rains.

Bottled water has largely run out at stores due to high demands. The situation has been further worsened due to the recent high temperature of over 30 degrees Celsius in Lima.

The country may brace for more rain as weather forecasts expect the rainfall to continue into April.